Suzuki’s all-new Ertiga will come to India around Diwali, but it’s already on sale in Indonesia. We hop on a flight to meet it. 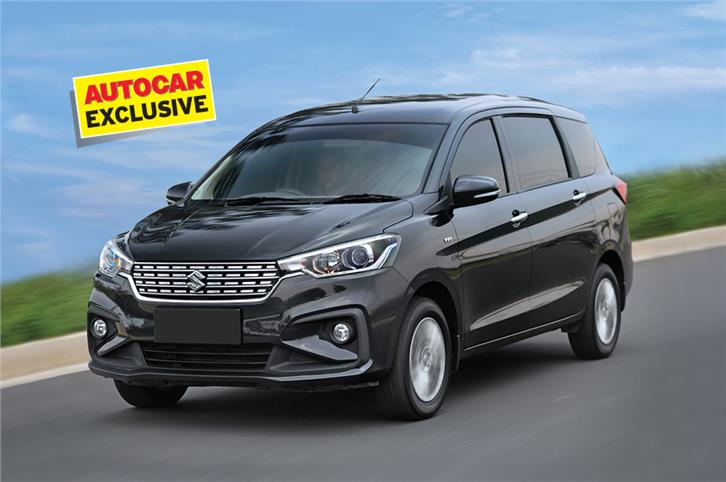 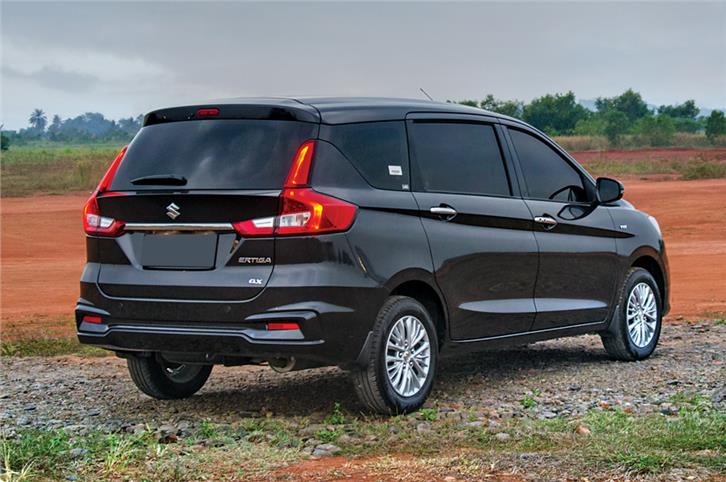 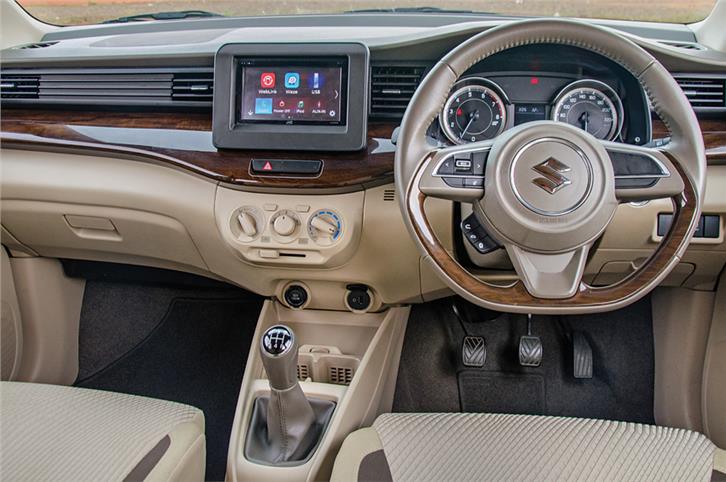 Lots of bits from the Dzire liven up cabin; build is typically Suzuki. 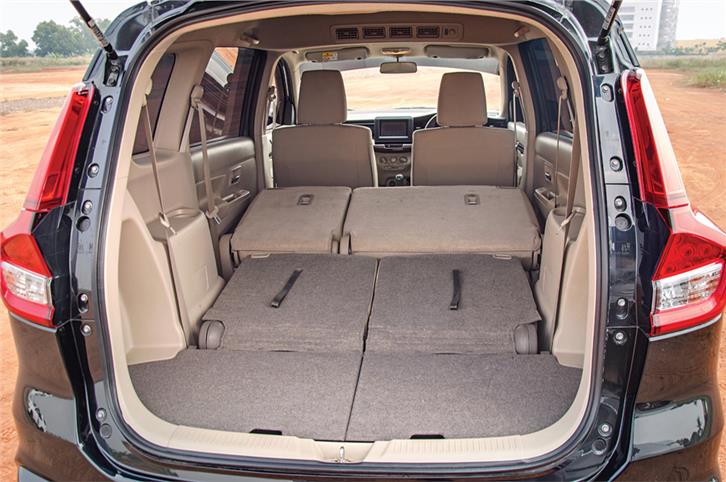 Engineering a car is a massive exercise. And, often, getting it right boils down to the little things – a few inches here, a few centimetres there. It’s all about finding the right compromise. Case in point, Maruti’s Ertiga, the one currently sold in India. Designed to be light, compact and seat seven, Maruti today knows it took things a bit too far, made it a bit too compact. This is why the all-new Ertiga I am about to get behind the wheel of features both, more space in the cabin and a larger engine under the hood; 100mm longer and 100cc larger (130mm and 88cc more to be precise), it promises much. But do these and the other changes help take the Ertiga’s ride and drive experience to the next level? The traffic-free roads on the outskirts of Jakarta beckon.

I can’t resist a bit of a walkaround when I see the MPV in the flesh for the first time. It sure does look bigger and bulkier. MPVs are all about space on the inside after all, but that also makes life difficult for the designers. 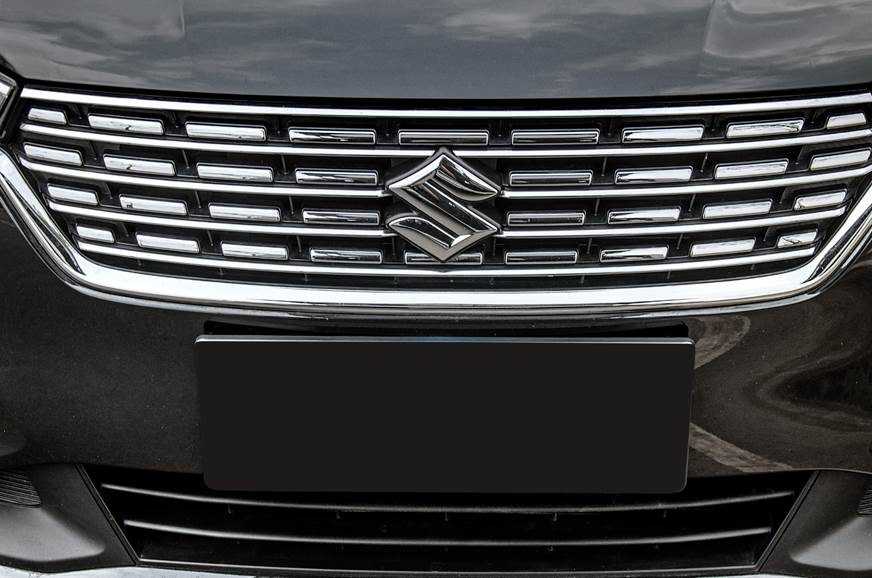 Loads of chrome on grille, but it works.

This isn’t a new problem. Truth be told, the battle between aesthetics and practicality has been raging for millennia. Sat at opposite ends of the ring, Kipling said: “Never the twain shall meet” and that could be the case here too. To understand just how difficult this is, take a long hard look at the plump-as-a-partridge profile of the new Ertiga. Still, Suzuki and Maruti designers have put in a stellar effort to make this Gen-2 MPV look more attractive.

First up, they’ve given it more of a cowl. While the current Ertiga sold in India is very ◊ ∆ ‘mono-volume’, this new one has a distinctive nose that protrudes out like on an SUV. Similar to the Innova Crysta in profile, the new Ertiga’s stand-up bonnet is attractively detailed too. The sleek-looking wraparound headlight enclosure gets chrome and metallic highlights, the projector unit is beautifully finished, and though there are myriad surfaces and shapes where the headlights meet the grille, the execution is so neat, it looks very classy. Even the massive ‘C’-shaped brackets that house the fog lamps give the chin a robust look, and the rising swage line that runs through the door handles makes the new Ertiga look a bit tipped-forward too. 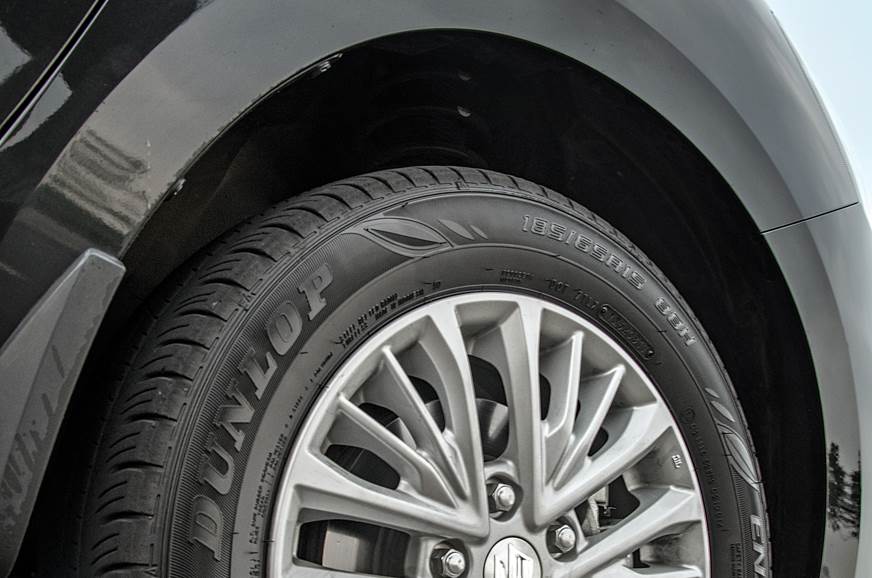 15-inch wheels look tiny against the bulk of the body.

I walk around the rear, and here, too, the ‘floating roof’ and ‘L’-shaped tail-lights work quite superbly. The designers at Suzuki have also widened the base to make it gel better with the bulk of the car. If only the profile were nicer; and to compound the issue, the 15-inch wheels look two sizes too small and ruin the stance. These lines and details would have looked so much better on an SUV.

To counter the added bulk, Maruti has put a larger, more powerful engine under the hood of the new Ertiga. Larger in capacity by 88cc than the 1.4 that currently powers the Ertiga in India, the new K15B also puts out substantially more power – 105hp compared to 92hp. And torque, with the increase in cubic capacity, has, of course, gone up too. 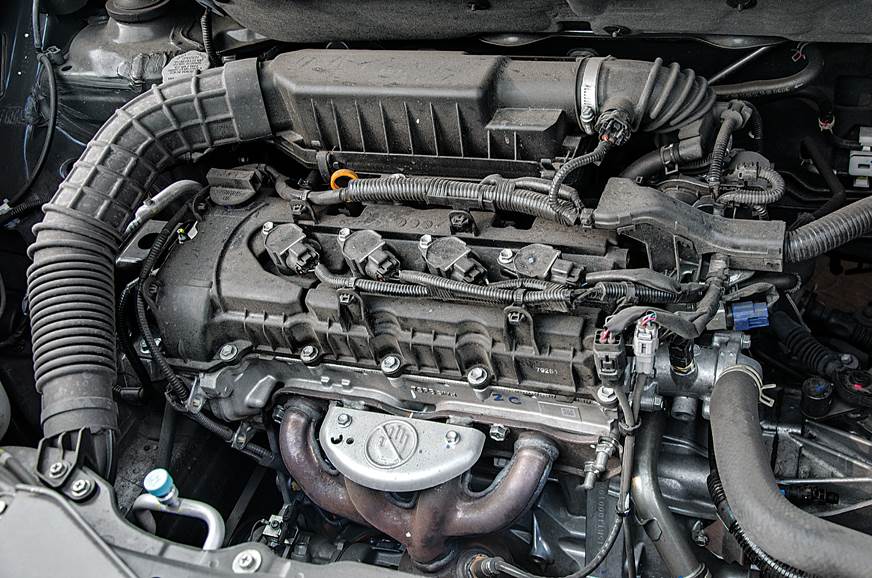 What has remained unchanged, however, is the character of the engine. I set off at a relaxed pace as what I’m keen to test initially is not flat-out performance but this engine’s improved pulling power. The 1.4 engine has always been very tractable and pulled cleanly from low speed, and now this larger 1.5 is identical in character too. In fact, with the additional torque and gearing that is only marginally taller in the lower gears, the new Ertiga pulls forward in an even more energetic manner.

This means I can potter around at low speed in a high gear, and pull away cleanly whenever I need to. Nice. Particularly useful in start-stop traffic, of which there is no shortage in downtown Jakarta. Yes, when fully loaded, you will need to downshift more often, but here, just three up, the Ertiga pulls so well from just about any engine speed, it’s quite relaxing to drive. 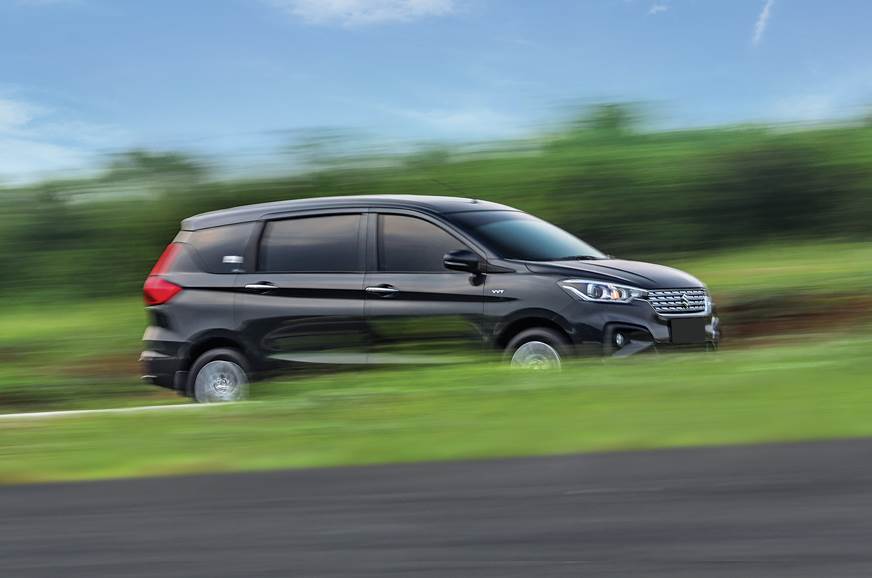 Power and torque delivery is also quite linear. There’s no sudden step up in power and there’s no spike in the mid-range, but torque keeps building and building until you get to the peak at 4,400rpm. And the new Ertiga also has a lot more oomph in the top end. The engine revs until just 6,200rpm, but spin the motor past 4,500rpm and there’s loads and loads of power, and then the new Ertiga feels reasonably quick; the strong top end is particularly satisfying to use if you are in a hurry.

The new K15B engine, however, isn’t the most refined unit around, especially at higher engine speeds. Cross 4,000rpm and the snarl from under the bonnet starts to sound strained. And go past 5,000rpm and the din rises further. Also, no way is this engine as smooth as the 1.5 unit of the Honda City, or for that matter, as eager to rev. More insulation is needed here for sure.

We need to negotiate a long stretch of dense but flowing traffic on the way to our next shoot location, and it’s here that the new MPV really shines. Built on Suzuki’s new Heartect platform, the Ertiga, incredibly, still drives like a large hatch rather than an almost 4.4m-long, seven-seat people mover. It does feel a touch bulkier from behind the wheel and slipping between lanes needs a bit more than just a flick of the wrist, but do a longish stint and the handling is so light and effortless, I often forget just how much more car there is behind me. The steering is nearly as light as that of a Baleno, the clutch feels like that on any popular Maruti hatch, and the progressive brakes have considerable bite too. 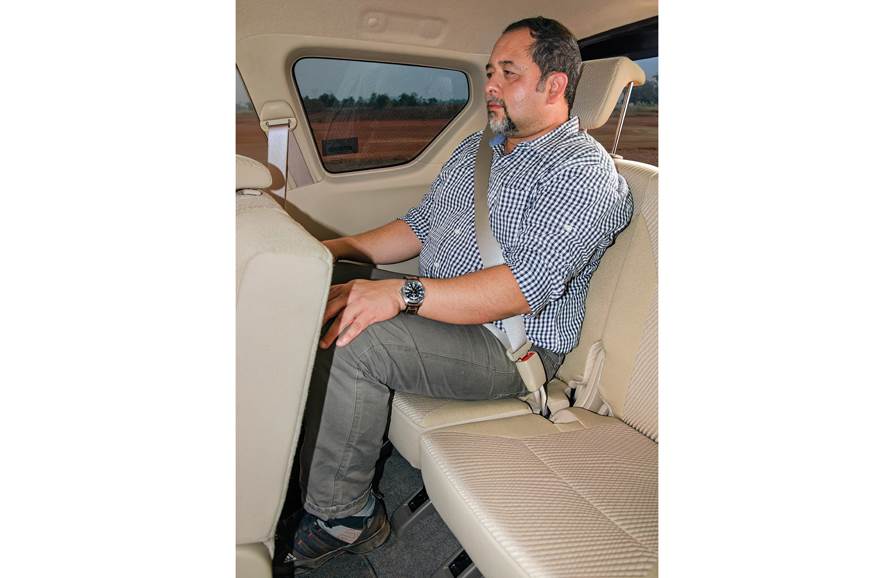 That little bit of extra bulk does show up, however, especially around long corners, and back-to-back lane changes also do cause it to roll a bit. But, that apart, handling is neat and tidy. So much so, in fact, carrying a good amount of speed into a corner is not something that makes you feel nervous in the least. And then there’s the fact that the five-speed gearbox is a pleasure to use. Almost as easy as a hatch to drive? Absolutely.

There is a bit of stiffness in the suspension though, and as far as ride is concerned, you do feel a few of the larger bumps as the wheels thud through. However, for the most part, ride quality is quite unobtrusive and comfortable.

We finally reach our destination on the outskirts of the city. Wide open vistas greet us, and the Ertiga is finally free from ‘messy’ reflections. Time to get the Nikons out. The light, however, is a bit too harsh, so I take the opportunity to take a closer look at the cabin and to hop from seat to seat to check comfort levels. Is the new Ertiga a proper full-sized, seven-seater this time around? Does comfort in the second row still need to be compromised to enable full-sized passengers to sit in the third row? 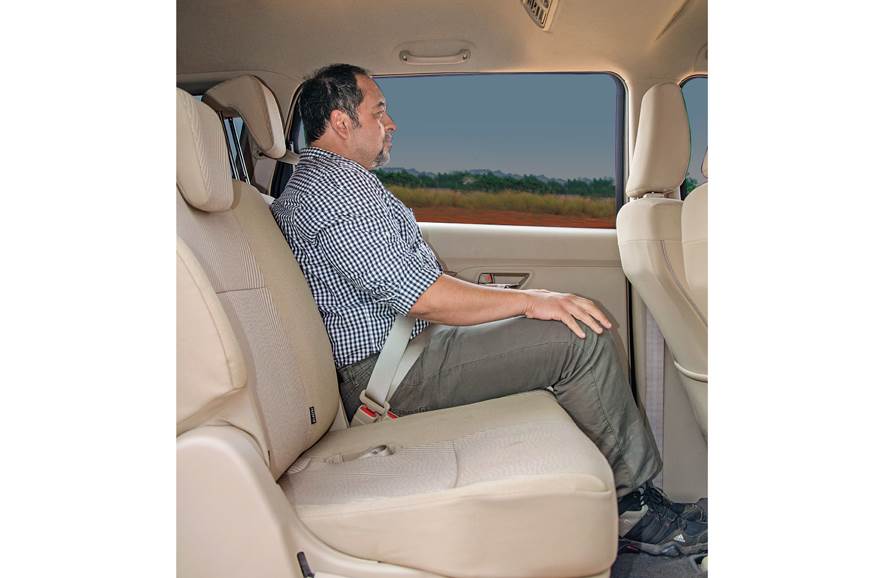 Good thigh support and the supportive backrest is spot on.

Let’s answer that last question first. I slide the second-row seats forward, until there’s more than sufficient legroom, and then flip the second row down and clamber into the all-important third row. Ingress is actually not too bad. Of course, you need to crouch and bend, like you are walking into a cave, and those massive, massive rear doors will make life difficult in a parking lot, but once I sit down, I soon realise, wow, there actually is a fair amount of space here. Much more than earlier. Headroom will be tight for six-footers, especially if you’re driving on a bumpy road, and the seat is still a bit low, but knee room is sufficient and adults may actually be able to endure longish journeys in the back now.

The second row, of course, is clearly the better seat. The height is just right, the long squab of the bench provides all the thigh support you need, and then, as on the third row, you can recline the backrest as well. Also, if there’s no one sitting behind you, legroom can be massive; almost limo-like. There’s only a blower unit above you, with no compressor of its own, so it only works as a fan; but even this makes a big difference as cool air comes at you as soon as you start the car. Those interested in the more practical side of things will be happy to know that the seats split 60:40. Unfortunately, there’s no centre armrest, cupholders or USB port in the back. You only get a 12V socket, which can be used with a USB adapter. 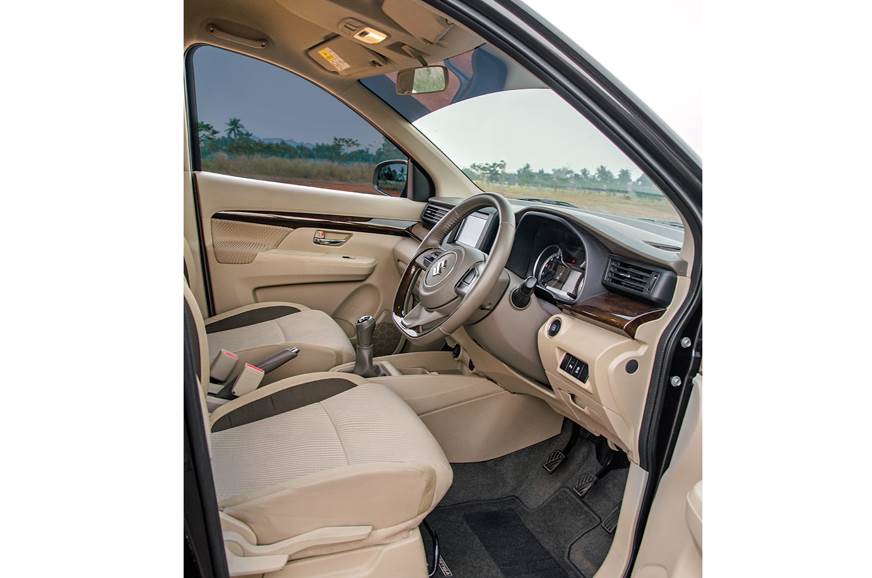 The driving position is slightly elevated; visibility is good.

As expected, there’s considerably more kit for front seat passengers. You get a USB, a 12V socket and even cooled cupholders that actually work pretty well. Suzuki has also worked hard to make the dash of the Ertiga more appealing. Like on the Dzire, there’s a band of nicely executed wood trim and a wood-lined steering too, and the neatly detailed instruments get a thumbs up as well. I even like those VW Passat-like faux vents or vanes that run across the dash. Plastic quality, however, isn’t quite as good as that on the Dzire, particularly on some of the big bits like the doorpads and the lower half of the dash, and the seat fabric felt pretty low rent too.

What will give the cabins of Indian cars a lift, however, is the fact that the centre console on this car is not representative. The aftermarket JVC screen seen here will be replaced by Maruti’s own SmartPlay unit, and our cars will get electronic climate control too. 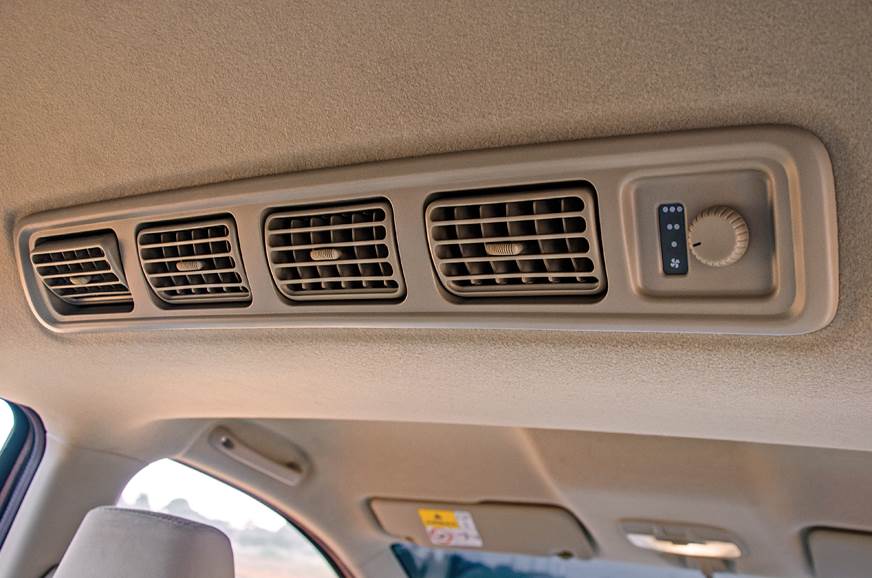 Only a blower, but is effective in cooling the rear.

The driving position is very good. Slightly elevated when compared to a hatch, you get an excellent view out and the driver’s seat is comfortable. There’s even a bit of boot space – 153 litres, even with all three rows up. It’s a bit less than the current car sold here, but there’s a box under the floor to store odds and ends.

Larger and more comfortable on the inside, equipped with a more powerful engine and to go on sale with plenty of new kit, the new Ertiga is certainly worth the wait. Expected to hit showrooms around Diwali, with only an increase of around Rs 50,000 in price, the all-new Ertiga actually manages to be both, reasonably comfortable for seven passengers, and light and easy to drive. Maruti will launch a four-speed automatic and is said to be working on a diesel option as well. Quality levels haven’t taken a big jump on the new Ertiga, but for those with extended families, this just could be the ideal choice.