The Jeep we’d all been waiting for came, saw and has seemingly conquered. Time to see if the Compass is as good as it’s made out to be. 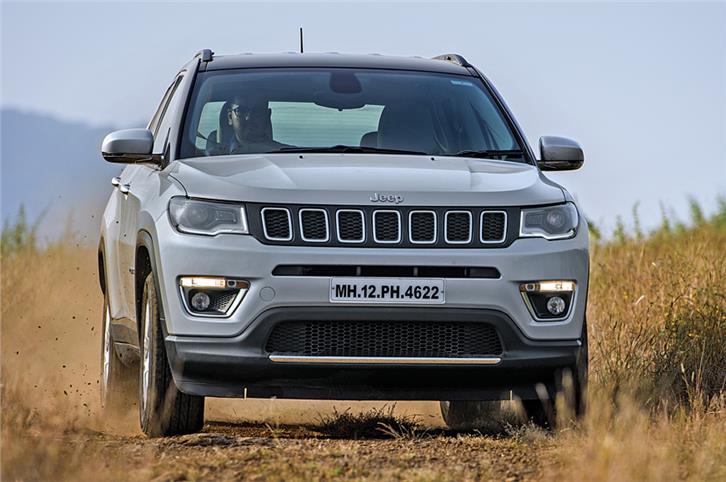 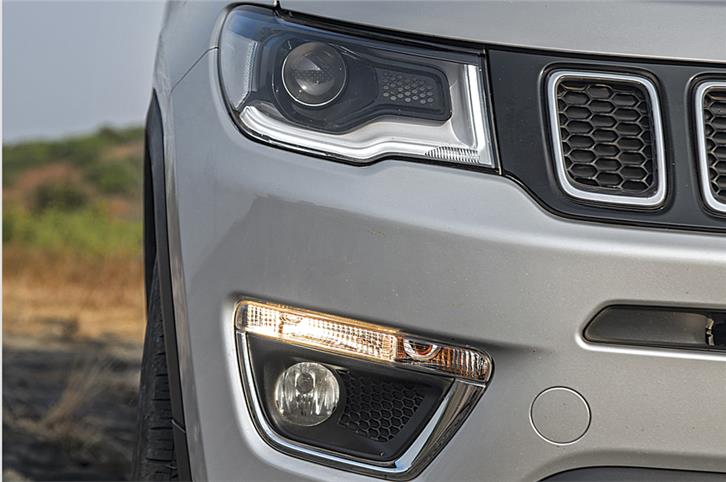 LED on headlight is parking light. Halogen light lower down is the DRL. 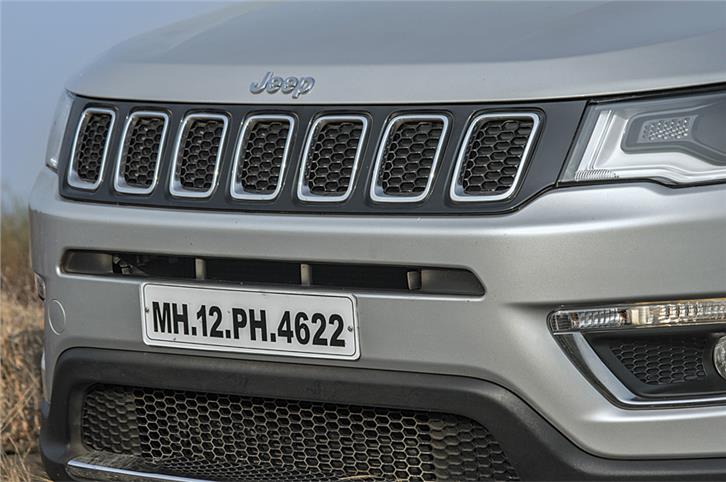 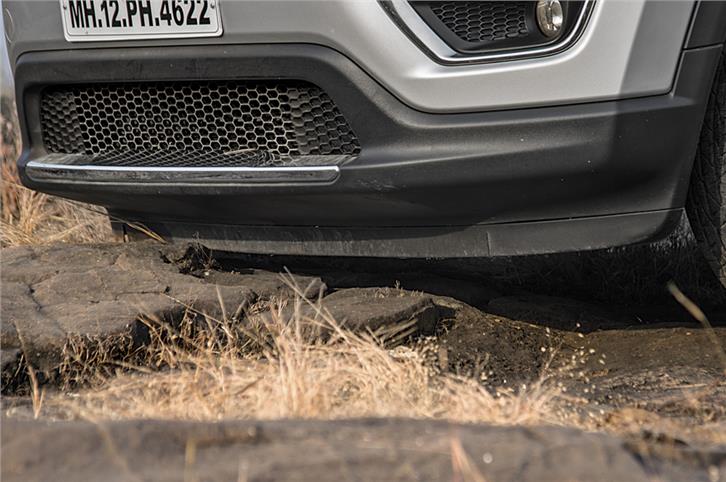 Lip at base of front bumper extends really low but is designed to flex.

The Compass is offered with two engine options, and both units from Fiat – the 1.4-litre MultiAir turbo-petrol and the 2.0-litre MultiJet II turbo-diesel – make their India debut on the Jeep. Not to be confused with the 1.4 turbo-petrol on the Abarth Punto, the MultiAir engine is unique for its hydraulically actuated variable valve timing for the intake valves. It uses a solenoid-controlled high-pressure oil chamber between each cam and intake valve; this way valve timing is extremely flexible and can offer precise variable valve timing in response to driving conditions like cold starts. Claimed benefits also come in improved efficiency and enhanced power. What you get is 163hp of max power, which is an impressive figure for such a small motor.

Allied to the automatic Compass’ seven-speed dual-clutch transmission, the engine delivers fairly good performance too; 0-100kph takes 10.29sec (the Tucson petrol auto does the sprint in 11.57sec) and kickdown acceleration is brisk as well. However, the build-up of speed is not as linear as you’d like – there’s lag under 2,000rpm, followed by a surge of power at about 2,200rpm. Extend the engine and you’ll find it to be a gutsy performer with a strong mid-range and a willingness to rev right until the 6,500rpm limiter. The engine could have been quieter though. It sounds gruff between 2,000-3,000rpm and noise levels are high in the upper band of the rev range. At low revs, you won’t hear much of the engine, but this does draw your attention to the audible sound of the gearbox shuffling through the ratios.

The seven-speed auto does a fairly good job of camouflaging the petrol engine’s lack of low-end poke. Shifts are smooth and timely in town, but stop-go traffic does tend to catch it out. At higher speeds, there are times when the gearbox doesn’t feel absolutely alert to changes in throttle position too. However, adopt a more aggressive driving style and the gearbox will play ball. There’s no Sport mode and paddleshifters have also been given a miss but the electronics allow liberal access to the top-end in full auto mode, and manual mode via the gear lever. It’s fun to downshift right to 5,500rpm when attacking a series of corners.

High-mileage users will, however, be drawn to the diesel Compass that comes mated to a six-speed manual gearbox. Interestingly, this 2.0-litre MultiJet II engine will, eventually, also find its way onto Tata’s all-new SUVs in the years to come but for now let’s focus on how it works on the Compass. The engine makes a healthy 173hp and 350Nm of torque in this application and the power gives the Compass the long legs frequent highway users will like. The mid-range is strong so you don’t need to downshift to overtake traffic, and there’s even ample go at 100kph in sixth gear. Just as well because power starts to taper out past 4,000rpm. In town, the diesel Compass has enough power off-boost to keep you moving with the flow of traffic. However, you’ll do well to keep the engine spinning above 1,800rpm, which is where the power comes in earnest. Swooping past traffic is a cinch.

Unfortunately, the MultiJet engine is not the last word in refinement. There’s a distinct clatter from the engine, you can hear a ‘swoosh’ from the turbo when accelerating and the engine booms and strains the when you rev it hard. Quiet as a Hyundai 2.0 diesel this engine is not.

Gearshifts on the six-speed gearbox are slick and you’ll love the feel of the metallic gear knob. What does make the Compass a bit troublesome to drive in slow-moving traffic is the clutch. It’s well-weighted but also snappy, so you have to modulate it with great care. In fact, the clutch action made launching the diesel Compass a tricky affair during our performance tests. We managed a 0-100kph time of 11.84sec but a more progressive clutch is sure to have resulted in a better time. For the record, in-gear timings are good, with the run from 40-100kph covered in 11.71sec, reflecting its strong overtaking ability on highways. Buyers looking for more convenience should wait for the introduction of the nine-speed automatic version of the diesel that is expected in 2018.