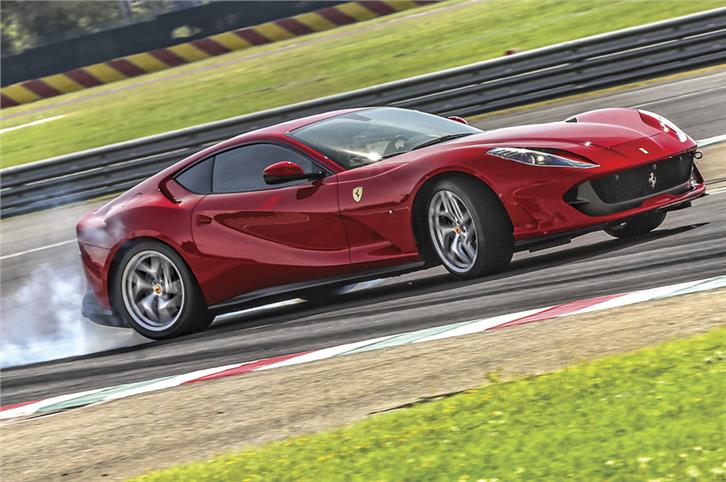 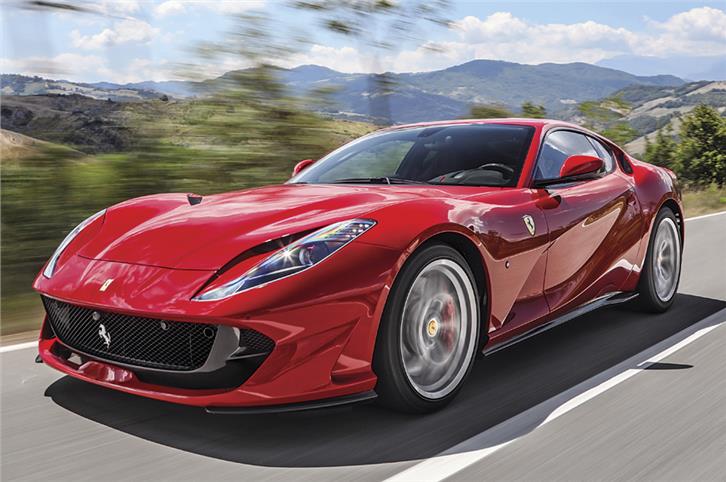 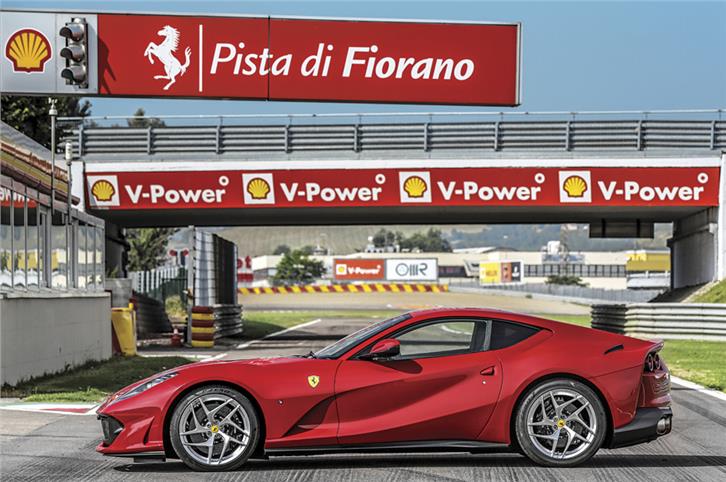 First comes the elevated heartbeat; an accelerated thump-thump-thump in my chest. Then comes the stress; a dryness in my mouth, cold sweat, and the feeling there’s a python slowly coiling itself tighter and tighter in the pit of my stomach.

All of this is due to Ferrari’s new car, the 812 Superfast, sitting pretty in the morning sunshine in Maranello, Modena. Now, on the face of it, this oddly named beast doesn’t appear to be an object of mass terror – it has the proportions and profile of a comfortable and relatively relaxed front-engine GT. It has a long bonnet, a 2,720mm wheelbase and a tight-fitting cabin that’s pushed all the way to the rear. But be under no illusions, this is no mild-mannered, buttoned-down-blazer-wearing gentleman’s express. Under the hood is an engine that’s nothing short of a raving lunatic, one of the most reactive and powerful naturally aspirated engines ever to be strapped under the bonnet of a road car.

What’s even crazier is that this 280-odd kilogramme gem of an engine sits in the ‘wrong’ place: in the nose and not over the driven rear wheels. Old man Enzo always said it was the horse that pulled the cart and not the other way around. And the 812 Superfast is also a resolutely rear-wheel drive. So what you have, in effect, is absolutely crazy 400hp being rammed down on to the road via the left rear wheel and 400hp being force-fed through the rear right one.

The other reason my knees are wobbling is that the F12, this car’s predecessor, is a car I remember well as being both, exhilarating and terrifying in equal measure. An automobile with the ballistic performance of a missile and a guidance system to match, driving it hard felt as immersive as skydiving. And this new 812 had over 70 horses more! Even worse, Ferrari says this new car is more like the F12 Tdf, a spiky, vicious, almost impossible to master, special track-focused edition; a car even Formula One driver Kimi Räikkönen finds challenging to drive.

The 812, however, is a different sort of beast. The engine is 75 percent new, rear-wheel steering is used for the first time, Ferrari has poured even more F1 aero tech into the shape of the car and the twin-clutch gearbox is now 30-40 percent faster. It even gets an all-new electronic suite of driver aids that work directly with the new electric steering.

Baby Steps
First impressions from behind the wheel are quite telling. The ride isn’t as comfortable as the F12’s, to begin with. I can see the top of the bulging wheel arches shimmy as the 812 thumps and thuds over even medium-size bumps, and what’s also noticeable is that it moves around a bit more over bumps too.

The 812’s cabin is also not as well-insulated as its predecessor’s. There’s more road noise, more tyre slap, more wind noise and the whine and resonance from that huge V12, every time I exercise it, is greater too. If anything, this feels like a harder-edged, track-biased version of the F12. Oh no; is it as crazy as a F12 Tdf?

This impression gets reinforced as I up the pace. Agility has taken a huge step forward. The car pivots willingly and feels positively light on its feet and the new electric steering makes it feel extremely lively and lithe. Flicking it left and right over a section of mountain road makes the chassis feel so pure – it’s almost like the car has no extraneous mass or weight. If ever a 1,600kg Ferrari could feel as light as a Mazda Miata, this is it.

Ferrari’s first electric steering, however, feels quite disconnected. Sure, it’s super accurate and very quick to react, and it has a bit of weight too, but the system is also quite inert and devoid of any road feel.

What I do feel, right in my chest, is the breath and explosive power of the now-enlarged V12. At low revs, there’s a deep ‘brassy’ resonance accompanied by an urgent tug. And this is true on even very small throttle openings. Tap the throttle and it just flies. And then because Ferrari’s twin-clutch gearbox is at least a thousand times smoother than the Aventador’s AMT, it’s much easier to drive in downtown Maranello traffic too.

Dip into that vast reservoir of power by flexing your foot urgently, however, and the 812 jerks your head back and quickly reminds you that this is no boulevard cruiser. The transition happens almost instantly. One minute it’s a well-mannered dressage pony, obeying every little flick of your wrist and prod of your heel, and the next it’s a crazed, lunatic of a ride, wide eyes glazed over in savage rage. Forget subtle inputs, now I need to just hang on.

Explosive bursts of acceleration are fun and all very well, but to get to the core of the 812 you have to really dig deep. This takes a bit of acclimatisation, to say the least. So, I use baby steps – really tiny ones – to go faster. But each step up seems so huge, I need to take a few deep breaths before I reach up and go to the next level. And then, as if the crazy performance isn’t enough to take my breath away, there’s the old-school six-into-one exhaust to contend with.

Past 5,000rpm, the baritone disappears. This is replaced by a trumpeting blare that seems to rise in anger and pitch as the large tachometer needle flicks up the powerband. Thing is, press on and the engine keeps getting smoother and smoother. By 6,000rpm, all hell breaks loose. Ferrari’s 12-cylinder now bends the laws of physics and feels almost frictionless, sounding for all the world like a naturally aspirated Formula 1 motor. The tacho needle flies at warp speed to its 8,900rpm redline and acceleration is so explosive in the lower gears, I all but white out with the violence, as I get slammed back violently into the seat and held there. And when I keep my foot in, I swear I can feel my face ‘melt’ as the skin is pulled tight like a mask.

Track Time
With its wider 275 front tyres, huge 315s at the rear and 53 percent over its rear wheels, the 812 is also superbly equipped to feel well-balanced in corners. The wider front tyres make a big difference. There’s now much more bite in the front end, and the harder and faster I go on Ferrari’s Fiorano test track, the more go-kart like and balanced the 812 feels. While the F12 would rock back on its rear wheels when you hit the gas hard, and roll this way and then that, this one, in contrast, corners flat and hard.

Arrive at a corner way too fast and you can use the huge brakes to bleed speed without drama. The car just feels so stable even under heavy braking. It feels ready to turn in even as I begin to lift my foot off the brake, and the gearbox is so fast and instantaneous, downshifts literally sound like gunshots.

Accelerating out of a corner cleanly, with the 812’s weight sitting nicely on the rear tyres, however, is all up to you. You can select Sport (the default setting) and get the car’s myriad systems to help you make a clean exit. And because this car uses tech like F1-Trac (progressive traction control), SSC (Side Slip Control) and a third-generation e-differential, you can explode out of a corner like a cannon shot. Want to increase your involvement; shift to ‘Race’, where you can feel more of the car’s real power. But it’s in the CT-off mode where the car really shines. Sure, there’s less of a safety net here and you need to be more measured and patient with the throttle as you grapple with the titanic forces involved; still, once I’ve settled the 812’s weight nicely at the rear, accelerating out with the rear spinning mildly feels just hilarious.

As the day progresses, I find myself enjoying the 812 more and more. I’ve relaxed and synced nicely with its rhythm. And what I truly like is that this car encourages you to drive harder and faster, the steering even nudging you in the right direction as the rear begins to slide. Yes, at times I’m not sure if it is the electronic nannies at work, and at others I just feel so much in control of everything. But so seamlessly do the electronic driver aids blend in with my style of driving, the experience is seamless. Ferrari’s greatest accomplishment, however, is making this resolutely digital driving experience feel completely natural and analogue. And let’s not forget this is a GT, with a spacious cabin, a big boot, and loads and loads of creature comforts.

Seventy years ago, Enzo Ferrari put a 1,500cc V12 in the nose of a car and the 125S was born. And then came the other legends, the 250 GT, 250 GTO, 275 GTB and the 365 GTB or Daytona; all Super GTs. Ferrari took a break after that, and in place of its super GT, launched two mid-engine cars – the 512 BB and the Testarossa. But then in 1996, the Maranello-based company realised it was missing something and the semi-practical Super GT returned with the 550 Maranello, 599 Fiorano and F12.

The 6.5-litre, V12-powered 812 today continues that tradition, taking the performance envelope to a new high. The explosive and screaming naturally aspirated engine remains the focal point of the car, and because it has a fantastic new chassis setup and a new set of Formula One-inspired electronic driver aids, you can even use all 800hp, even with the rear-drive-only setup. Sure, the suspension is a bit stiff even in bumpy road settings, the new electric steering is a bit inert and the 812 is out of reach for most mortals with a launch price of Rs 5.2 crore (ex-showroom, Delhi).

But if you are lucky enough to be in the market for such a car, remember this – the 812 is almost certainly the best car of its type ever created, by some margin. 100 percent supercar and 100 percent GT both at the same time, this high-water mark blends the best of both worlds in one stunning, eye-catching silhouette. Galloping emission norms, however, mean the 812 could just be the last of the breed – the last non-electrically boosted, 12-cylinder, front-engine GT from Ferrari ever. So why just buy a supercar, when you can buy a legend?