The Virtus sedan will be sold in India with two engine options and bookings are currently underway. 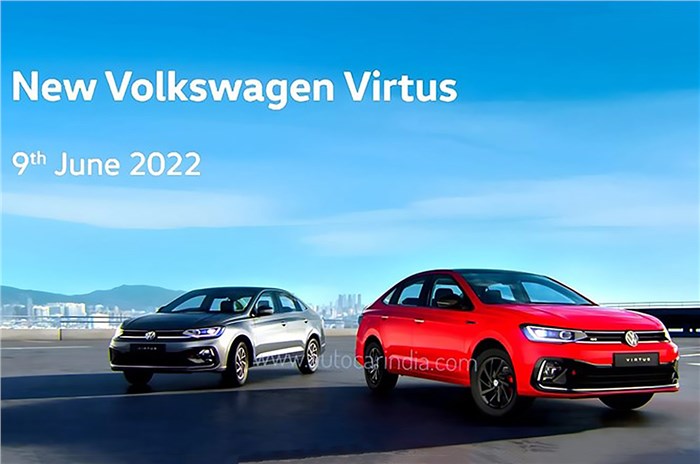 Volkswagen India will launch the Virtus sedan on June 9, 2022. The Virtus is the German carmaker's contender in the midsize sedan segment and rivals the Skoda Slavia, Hyundai Verna and Maruti Ciaz, as well as the Honda City, which is too expected to get a strong-hybrid variant around the same time.

The Volkswagen Virtus will be replacing the ageing Vento sedan that went on sale a decade ago.  Series production for the Virtus sedan has already begun at the Chakan plant and bookings have been open for a few weeks.

The Virtus sedan is based on the modular MQB A0 IN platform which has been tailor-made for India. This architecture also underpins other Volkswagen Group models here like the Skoda Kushaq, the Skoda Slavia sedan and the Volkswagen Taigun SUV. The Virtus that will go on sale in India is actually a facelifted model of the car that has been on sale in a few overseas markets like Brazil for some time. India is the first market to get the facelifted Virtus sedan, which will go on sale in other markets subsequently.

As far as features go, the top-spec Virtus will get a 10-inch touchscreen infotainment system, an 8.0-inch digital instrument cluster, wireless phone charging, connected car tech, ventilated front seats, a sunroof, ambient lighting, a cooled glovebox, and auto headlamps and wipers. On the safety front, higher variants of the car will get a tyre pressure monitor, six airbags, ESC and hill-hold control. The Virtus GT will get red detailing on the dashboard, red stitching, and aluminium pedals for a sporty appeal.

Volkswagen started accepting bookings for the Virtus on March 8. Deliveries for the car are expected to start by mid-June.