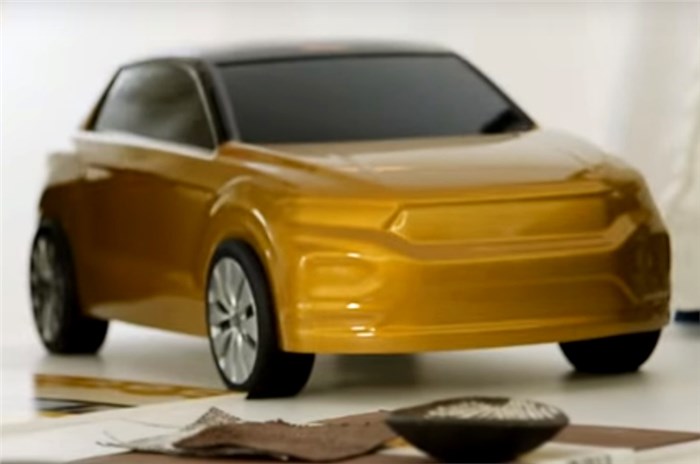 VW’s smallest SUV yet, the new SUV will be showcased at the upcoming Frankfurt Motor Show 2017.

First seen in concept form at the 2014 Geneva motor show, Volkswagen has now released teaser images for its new small SUV, the T-Roc. The VW T-Roc will be officially revealed onAugust 23, 2017,and is expected to make an appearance at the upcoming Frankfurt motor show.

A small video clip released by the German manufacturer talks about the design that has found its way on to the crossover. The T-Roc will be VW’s smallest SUV measuring just 4,179mm in length, a good 200mm short of the larger Tiguan. The test mule spotted a while back showed a short SUV with a smaller wheelbase compared to its elder sibling.

The video teasing the T-Roc shows a robust and muscular design on the outside and funky, dual-tone colour options on the inside. The new crossover will be equipped with a VW’s Active Info Display, which is essentially a virtual instrument cluster and a large touchscreen infotainment system that dominates the dashboard.

Based on the flexible MQB platform that underpins the new Golf and a few smaller Audis, the T-Roc is expected to get a 2.0-litre, four-cylinder, turbocharged common rail diesel engine that will power all four wheels via a six-speed, dual-clutch auto transmission. Smaller 1.0-litre petrols and 1.6-litre diesels will also be on offer on lower-spec trims.

When it launches in international markets at the end of the year, the VW T-Roc will rival the likes of the Hyundai Kona, Audi Q2 and Nissan’s Juke. There is no word from VW on bringing the car to India.

Volkswagen is also readying the next-gen Polo-based sedan. Read more on that here.