Tata Motors offering benefits of up to Rs 70,000 on select models in its line-up. 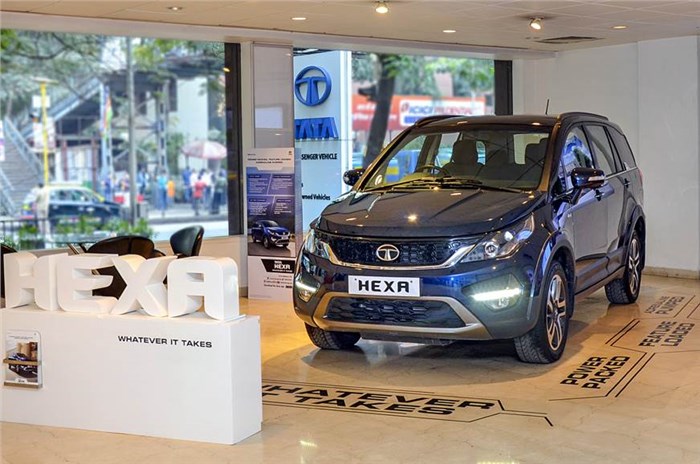 With the new financial year just around the corner, Tata dealers are offering some lucrative discounts on the cars and SUVs across the country. Models such as the Nexon, Tiago, Tigor and the Hexa are being offered with benefits of up to Rs 70,000, depending on the model and/or variant. Here is a list of some of the best discounts on offer.

Benefits of up to Rs 70,000
Tata’s premium seven-seater crossover, the Hexa, is being offered with benefits of up to Rs 70,000, depending on the variant selected. Currently, the Hexa is Tata’s most expensive model on sale, available with a choice of seating configurations and powered by a 2.2-litre diesel engine in two states of tune – 150hp/320Nm and 156hp/400Nm. The 150hp unit is available with a 5-speed manual gearbox only, while the more powerful derivative is offered with either a 6-speed manual or automatic gearbox with a four-wheel-drive model, as well. Tata recently updated the Hexa for 2019, with cosmetic tweaks, as well as more equipment.

Benefits of up to Rs 65,000
The pre-facelift Tigor is on offer, with benefits of up to Rs 65,000 at dealerships across the country, subject to the car’s availability. Sitting half a segment below the remainder of the sub-four-metre sedan segment, the Tata Tigor is offered with the choice of either an 85hp, 1.2-litre three-cylinder petrol motor, or a 70hp, 1.05-litre three-cylinder diesel mill. Both units are available with a 5-speed manual gearbox as standard with the petrol additionally offered with the convenience of a 5-speed AMT unit.

Benefits of up to Rs 50,000
Tata’s entry into the growing sub-four-metre SUV segment, the Nexon is available with benefits of up to Rs 25,000 for the petrol and Rs 50,000 for the diesel models, respectively. Being the first made-in-India model to score a five-star safety rating in the Global NCAP crash tests, the Nexon is available in seven trim levels with a choice of two engines and two gearboxes. The petrol unit in question is a turbocharged derivative of the 1.2-litre unit from the Tiago, good for 110hp, while the diesel is the brand’s in-house-developed 110hp, 1.5-litre four-cylinder unit. Both motors are offered with a 6-speed manual gearbox as standard, with the option of a 6-speed AMT unit.

Benefits of up to Rs 40,000
It was only late last year that Tata introduced a new top-spec trim on the Tiago, bringing with it a touchscreen infotainment system along with larger alloy wheels and auto climate control among other pieces of kit. Dealers are now offering the Tata Tiago XZ+ with discounts of up to Rs 40,000 in a bid to make it a more attractive proposition for buyers. Under the hood, the Tiago is offered with the same engine and gearbox options as the Tigor.