Mahindra dealers are offering massive discounts on various models in the carmaker’s line-up all through November. 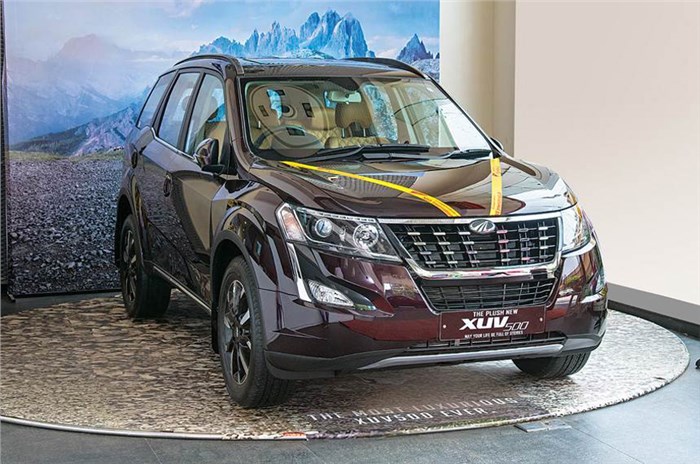 Mahindra is offering discounts of up to Rs 1.20 lakh on select models in its range of SUVs all through November 2019. The discounts have been introduced with the hope that it will increase sales, considering the recent state of the automotive industry. The discounts can be availed on the Scorpio, the XUV 300, XUV 500, TUV 300, the Alturas and more. We have compiled a list with all the models and the discounts below.

Save up to Rs 1.20 lakh
Mahindra’s flagship SUV, the Alturas G4 is basically the carmaker's version of its subsidiary SsangYong’s Rexton G4. The Alturas G4 sports large dimensions and has an imposing presence along with a surprisingly well-appointed and well-finished interior. Powering the SUV is a refined 2.2-litre, turbo-diesel engine that produces 181hp and 420Nm of torque. Dealers are offering discount and benefits worth Rs 1.20 lakh on both the G2 and G4 variants of the large SUV. Rivals for the Alturas G4 include the Ford Endeavour, Toyota Fortuner and the Isuzu MU-X.

Save up to Rs 1.10 lakh
One of four sub-compact SUVs in Mahindra’s portfolio, the TUV300 was given a mid-life facelift earlier this year. It continues to use the 100hp, 1.5-litre diesel engine paired to a 5-speed manual gearbox. The TUV300 can be had with discounts of up to Rs 1.10 lakh on the T10 variant of the pre-facelift model.

Save up to Rs 75,000
The XUV500 has been on sale in our market since 2011, and despite its many updates over the years, it has started to show its age compared to some of its newer rivals like the MG Hector, Tata Harrier, Kia Seltos and Hyundai Creta. Mahindra has already started working on the next-gen XUV500 and is expected to launch it in India by the end of 2020. Mechanically, the XUV500 comes with a 155hp, 2.2-litre turbo-diesel engine as well as a 140hp 2.2-litre petrol engine. Dealers across the country are offering benefits and discounts of up to Rs 15,000 on the W3 variant, Rs 66,000 on the W5, W7 and W9 variant, and Rs 75,000 on the top-end W11 variant.

Save up to Rs 70,000
In essence, the TUV300 Plus is a 9-seat version of the TUV300 (a 7-seater), and it offers a unique combination of space and practicality. Mahindra only offers the model with one engine and gearbox option – a 120hp, 2.2-litre diesel engine paired to a 6-speed manual gearbox. Interestingly, select dealers still have some stock of the MY 2018 TUV300 Plus and are looking to push sales by extended a discount of Rs 70,000 on these models.

Save up to Rs 70,000
Mahindra’s entry-level, sub-four metre SUV offering, the KUV100 NXT is more a hatchback with SUV styling than an outright SUV. It is powered by either an 83hp, 1.2-litre petrol or a 78hp, 1.2-litre diesel engine. Its rivals include the Ford Freestyle and the Maruti Suzuki Ignis. You can buy the K8 variant of the MY 2018 KUV100 NXT at discounts of up to Rs 70,000 from Mahindra dealerships.

Save up to Rs 62,000
Mahindra’s large MPV offering, the Xylo has been around in our market since 2009, and it feels dated now, especially with the arrival of newer and better-equipped competitors in the market. However, the Xylo still has a very spacious cabin and is available in 7-, 8- and 9-seat configurations. Power comes from either a 2.5-litre or a 2.2-litre diesel. Discount of up to Rs 62,000 can be availed on all variants of the MPV.

Save up to Rs 55,000
The Scorpio has been a mainstay in Mahindra’s line-up for many years now and it has also been a consistent performer in terms of sales. The Scorpio comes with two diesel engines – a 2.5-litre that’s paired to a 5-speed manual and a 2.2-litre unit that can be had with a 5-speed or 6-speed manual gearbox. As the SUV now faces stiff competition from newer rivals, dealers have introduced discounts of up to Rs 10,000 on the 2.5-litre- equipped S3 variant, Rs 55,000 on the S5 variant, while the S7, S9 and S11 variants are being offered with discounts and benefits of up to Rs 35,000.

Save up to Rs 50,000
Among the latest additions to the carmaker’s line-up, the XUV300 sub-four-metre compact SUV is Mahindra’s most refined offering in the segment. Essentially a re-engineered version of Mahindra subsidiary, the SsangYong Tivoli, the XUV300 comes with a 117hp, 1.5-litre diesel engine which can be had with either a 6-speed manual or AMT gearbox. A 110hp, 1.2-litre petrol engine is also offered by the carmaker with a sole 6-speed manual gearbox option. Dealers are offering discounts and benefits worth up to Rs 35,000 can be had W4, W6 and W8 variants, while that figure is increased to Rs 50,000 on the W8 Option and W8 AMT variants.

Save up to Rs 30,000
The Mahindra Bolero is among the bestselling utility vehicles in our market, one known of its ruggedness and reliability. However, the Bolero does look old now and its interiors suffer from flawed ergonomics and feel cramped. Now, discounts of up to Rs 30,000 are being offered by dealers across the country on the SUV, in a bid to promote sales.

Save up to Rs 30,000
The Bolero Power Plus is a rugged SUV and is essentially a sub-four-metre version of the Bolero with a smaller engine. Not much differentiates the Power Plus from the standard Bolero in terms of looks, barring the revised bumpers. Power for the sub-compact SUV comes from a 1.5-litre, turbo-diesel engine which produces 71hp and 195Nm of torque. Mahindra dealers are offering discounts and benefits of up to Rs 30,000 across all variants of the SUV.

Save up to Rs 25,000
The Thar is an out and out off-roader; it is tough as nails and is capable of tackling some truly rough terrain. Now, Mahindra is all set to bring in an all-new Thar to replace the current model. Discounts and benefits worth up to Rs 25,000 are being offered on both the current ABS and non-ABS Thar models, in an attempt to push sales. The Thar gets a 2.5-litre, four-cylinder turbo-diesel engine that produces 107hp and 247Nm of torque. Power is sent to all four wheels via a 5-speed manual gearbox.