Toyota India puts focus back on Yaris to boost sales

Sales increased by 83 percent in January-February 2020. 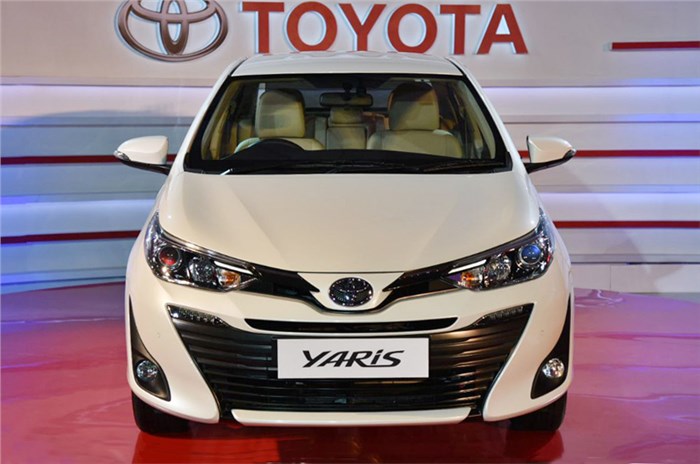 Blame the absence of a diesel engine option, relatively high pricing or competition from well-entrenched models like the Honda City, Maruti Suzuki Ciaz and Hyundai Verna, the Toyota Yaris has not sold to potential in India. Since its launch in 2018 till February 2020, the Toyota midsize sedan has sold all of 15,009 units.

However, with the Corolla Altis and Etios on their way out, Toyota has decided to double down on the Yaris and put its entire weight behind its only sedan offering in the mass market segment. Toyota refreshed the model last year, introducing new stylistic touches like a dual-tone paint shade and diamond-cut alloy wheels, adding a bit more pizzazz to the design. A price-rationalisation drive also added value-rich versions to the Yaris. New, lower-spec variants equipped with three airbags, instead of the previously standard seven, which means that the Rs 8.76 lakh starting price of the Yaris undercuts its competition, including the City and Rapid. Though still on the higher side, the Rs 14.18 lakh sticker price of the range-topping Toyota Yaris automatic now manages to undercut the top-spec Honda.

To further improve the value proposition and bring down the cost of ownership, the Japanese automaker has rolled out numerous financial packages aimed at providing bespoke solutions to meet varying customer requirements. One such scheme essentially allows prospective customers to take the sedan home with a low down payment and a low EMI for the majority of a three-year tenure, and pay a lump sum right at the end. Speaking to Autocar India, Naveen Soni, who recently took over the reins at Toyota Kirloskar Motor as the senior vice president, sales and customer service, elaborated, "The customer doesn't have to finance 50 percent of the value of the vehicle. Of the other 50 percent, he only has to support 10 percent as the down payment. If he doesn't want to do even that, then looking at his financial credentials, finance companies are willing for a 100 percent loan. So, even with no down payment, he can walk out with a Yaris." Providing more incentive, the scheme also includes a "50 percent assured buyback" offer for the sedan after the three-year period.

The company's continued persistence has reflected in recent performance figures. The Yaris posted sales of 1,267 units in the opening 2 months of 2020, registering a year-on-year (YoY) growth of 83 percent. February 2020 saw a sales increase by 55 percent, with 542 units of the Yaris sold.

The Japanese automaker is also looking at the fleet segment to increase the Yaris' market penetration. Commenting on the prospects, Soni mentioned, "As far as taxi is concerned, the steps will be to first look at a taxi-suitable, low-spec model. That will be the starting point, then we can definitely offer this." The Yaris in the base-spec J (Optional) trim currently features equipment like projector headlamps, a cooled glove box, a height-adjustable driver's seat, remote locking, all-round power windows, power adjustable wing mirrors, a rear armrest, split rear seats and three airbags, some of which make it "over-qualified" to be a taxi. The carmaker will be looking to de-spec the model for a fleet-suitable derivative. While fleet sales could bring in the numbers, Toyota will have to ensure the Yaris doesn’t develop a ‘taxi’ image that could push private buyers away.

Whether the Yaris can continue on its growth trajectory in this tough market and with the new City round the corner, remains to be seen. Clearly, though, Toyota has not given up on its sedan just yet.