Despite sales dropping in their respective segments, the MPV and SUV hold a claimed 52.91 percent and 63.9 percent segment share, respectively. 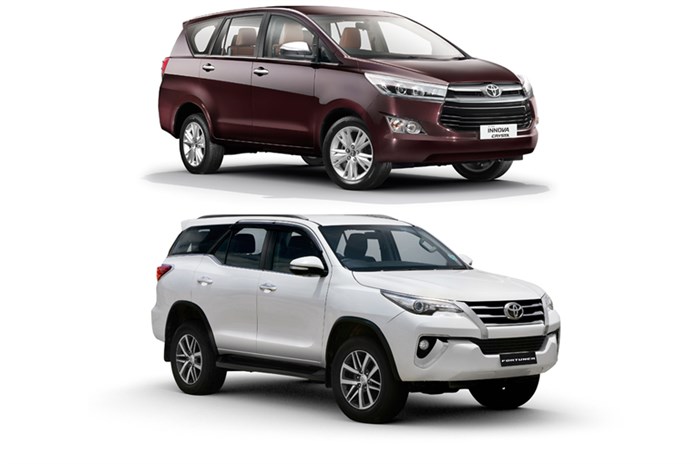 Toyota Kirloskar Motor has announced that February 2020 sales of the Innova Crysta MPV and Fortuner SUV have led to an increase in the market share in their respective segments. Toyota claims that over 9 lakh units of the Innova have been retailed since the first-gen model launched back in 2005 – its sales have regularly contributed to over 40 percent of the segment’s total sales.

In the month of February 2020, the Innova Crysta logged one of its highest segment shares since prices for the second-gen model were revealed in 2016 – Toyota’s MPV accounts for 52.91 percent of total segment sales. Meanwhile, the Toyota Fortner, which held a 54 percent share of the full-size, seven-seat SUV segment during 2019, recorded its highest ever increase in market share during the month –Fortuner sales account for 63.9 percent of total sales in the segment.

It was just at the beginning of this year that Toyota India introduced the BS6-compliant Innova Crysta, which saw the 2.7-litre petrol engine and 2.4-litre diesel engine upgraded to meet the new norms – this also meant the 2.8-litre diesel was discontinued from the MPV’s line-up. Due to the update, Innova prices also increased by about Rs 11,000-12,000, depending on the variant. Shortly after, the brand introduced a limited-run Toyota Innova Crysta Leadership Edition, priced at Rs 21.21 lakh.

For an introductory period, BS6 Fortuner prices are the same as the BS4 model’s price, but they will increase in the coming weeks. In BS6 form, the Toyota Fortuner’s powertrain options are unchanged – the 166hp, 2.7-litre petrol and 177hp, 2.8-litre diesel engine continue with upgrades – as are the features and tech on offer.

More recently, Toyota launched the Vellfire luxury MPV as a Mercedes V-class rival and is looking to focus on the Yaris to boost sales. In addition, the Japanese carmaker is also evaluating the Supra for an India launch.