Based on our real-world tests, here’s a look at the Nexon EV Max’s range.

Tata has broadened the Nexon EV’s appeal with an all-new range-extender called Tata Nexon EV Max. This new version packs in a 33 percent larger battery pack, and the claimed range is said to go up to 437km, which is 125km more than the 30.2kWh standard version. Is the Max’s range really as good as Tata advertises? We put it to test in the real world to get the answer.

What is the real-world range of the Tata Nexon EV Max?

With frequent stop and go scenarios in the city, the Nexon EV Max managed an efficiency of 6.6km per kWh, translating to a real-world range of 266km. On open roads, which allow you to hold steady speeds, electric vehicles constantly consume power and there are very few occasions to recoup the lost battery charge. As a result, highway efficiency was a bit lesser than in the city, at 6.4km per kWh, translating to a highway range of 259km. The overall range, as tested, is 263km on an average, which is only about 60 percent of what Tata claims in the real world. 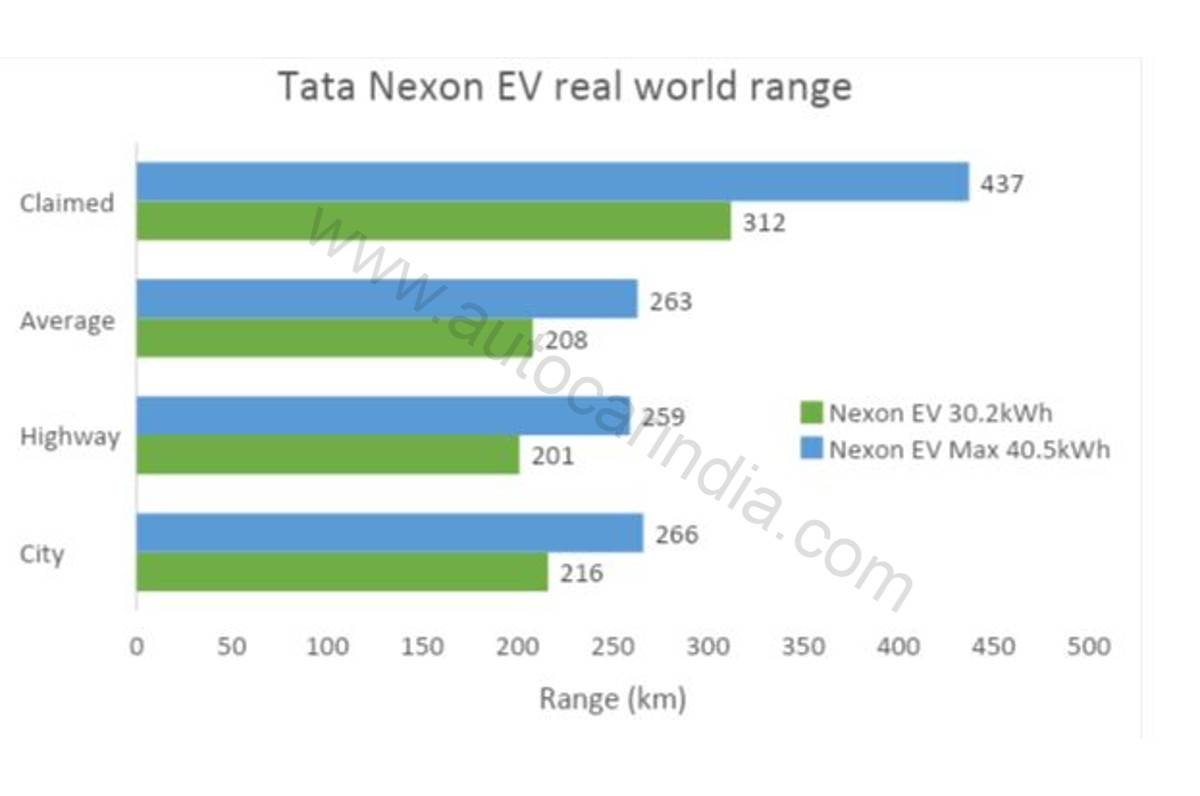 The Max’s average efficiency of 6.5 km per kWh is much lower than the standard Nexon EV’s 6.9 km per kWh. The 100kg weight gain certainly affects efficiency. In Eco and City mode, the Max makes a conservative 97hp and 170Nm (20Nm more than the standard Nexon EV’s City mode), and only Sport mode extracts 143hp and 250Nm, which is the most entertaining mode but depletes the battery the quickest. We conducted our test in Eco mode, which has a slightly duller throttle response than City mode.

This time around, there are regeneration levels, with level three being the most intense in terms of deceleration and recouperation of energy, and level zero switching this feature off completely, thus enabling the car to coast without any sudden deceleration or loss in momentum on open roads. For our tests, we set the regen to the mid setting, level two, all throughout.

What’s interesting to note is that the battery doesn’t recoup any energy between 100 and 95 percent charge levels. It also limits torque once the charge drops below 15 percent and will eventually go into limp mode as the battery depletes further, where it limits the vehicle’s speed and turns off the climate control to enable the driver to maximise range and reach a charging location.

Before our real-world range test, the battery of our test car was fully charged, and we maintained tyre pressures in accordance with the manufacturer’s recommendation. The car was driven in fixed city and highway loops, and we maintained certain average speeds. This test was conducted with a driver plus a passenger, and periodic driver swaps further neutralised variations in driver patterns. At the end of each cycle, we calculated the range based on the percentage charge consumed. Throughout our test, the climate control was set to 22 degC in full-auto ‘Economy’ setting, and other electrical like the audio system, indicators and ventilated front seats were used when required, just like how a regular user would. We take pride in our testing data, which isn’t merely consistent, but also gives users an accurate indication of what they can expect in the real world.