Showcased at the 2019 Geneva motor show as the Buzzard, the Harrier-based Tata Gravitas will arrive in February 2020. 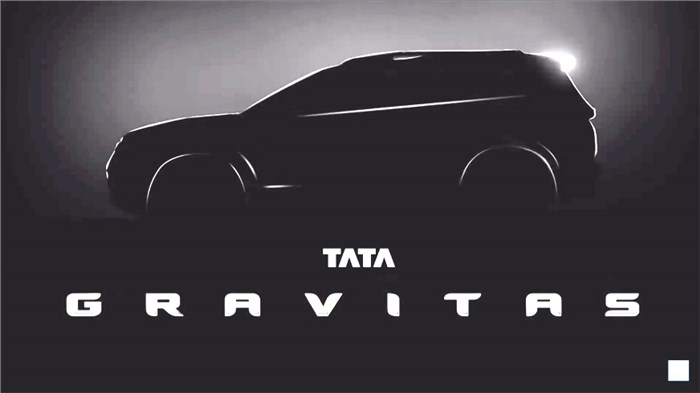 Having revealed it for the first time at the Geneva motor show earlier this year as the 'Buzzard', Tata Motors has now officially announced the market name for its Harrier-based seven-seat SUV – the Tata Gravitas. That’s not all, though – the company has also confirmed the Tata Gravitas' India launch will take place in February, next year; potentially at Auto Expo 2020.

As you will recall from pictures of the Buzzard, the Tata Gravitas' face looks more or less the same as the Harrier’s. With its roof rails, the Gravitas looks notably taller, sports running boards and bigger alloy wheels in a different design than the Harrier.

At the back of the Gravitas, you’ll notice a boxy, more upright rear section designed to liberate more headroom for third-row passengers. The rear spoiler is more prominent, while the boot lid is new, with a larger windshield and mildly revised styling for the tail-lights.

Based on the same Land Rover D8-derived Omega platform as the Harrier, the Gravitas measures 4,661mm in length, 1,894mm in width and 1,786mm in height. That means the Gravitas is 63mm longer and 80mm taller than the Harrier, but the Gravitas gets a larger rear-quarter glass, replacing the stylish ‘pinched’ window line. At 2,741mm wheelbase is identical to that of the Harrier.

As showcased in Geneva, the Tata Gravitas’ interior will also be largely identical to that of the Harrier – but, of course, there will be a third row of seats. The Tata Gravitas could get a large panoramic sunroof; and while the Gravitas showcased in Geneva rocked 19-inch wheels, the model spied testing in India ran 18-inch wheels borrowed from the Land Rover Discovery Sport. The latter are the ones we expect to see on Tata’s upcoming vehicle.

The Gravitas will also be equipped with a more powerful, BS6-compliant version of the Harrier’s 2.0-litre Kryotec diesel engine, producing around 170hp and 350Nm of torque. Transmission options for the Gravitas will include a 6-speed manual and a Hyundai-sourced 6-speed torque-convertor automatic gearbox.

With the five-seat Harrier priced between Rs 13-16.86 lakh (ex-showroom), one can expect the Tata Gravitas' price to be around Rs 1 lakh more than the Harrier's when it launches in February 2020.