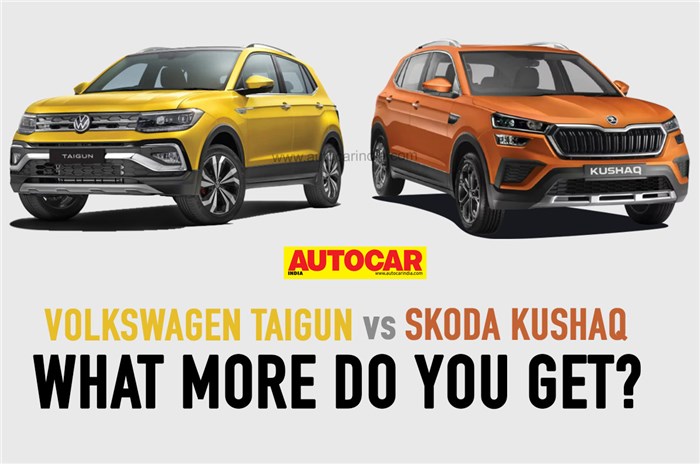 We simply compare the brochures of the Taigun and Kushaq to help you decide between these two mid-size SUVs.

The Volkswagen Taigun and Skoda Kushaq are two cars that have a lot in common – they’re built on the same platform, have the same powertrains, similar cabin space and practicality, and even similar equipment levels. To make matters even more interesting, Volkswagen has priced the Taigun at par with the Skoda Kushaq, for the most part. To simplify your buying decision, we pit their comparable variants against each other to list out what each offer.

Available only with the 1.0-litre TSI turbo-petrol engine with a 6-speed manual, their entry-level variants are fairly well-equipped when it comes to safety kit. Both offer a host of standard safety features like ESP, ABS with EBD, dual airbags, multi-collision braking (MCB), electronic differential lock, and it even gets all seats with 3-point seat belts and five head restraints for all passengers. In addition, the following are also offered:

Unique to the Kushaq Active variant is a height adjustable driver’s seat, which the Taigun gets only in the Highline variant onwards.

These variants get all the features of their base variant, plus the ones listed below:

The automatic variants of both these cars share the same features as their manual counterparts. In addition, they get hill-start assist and paddleshifters. 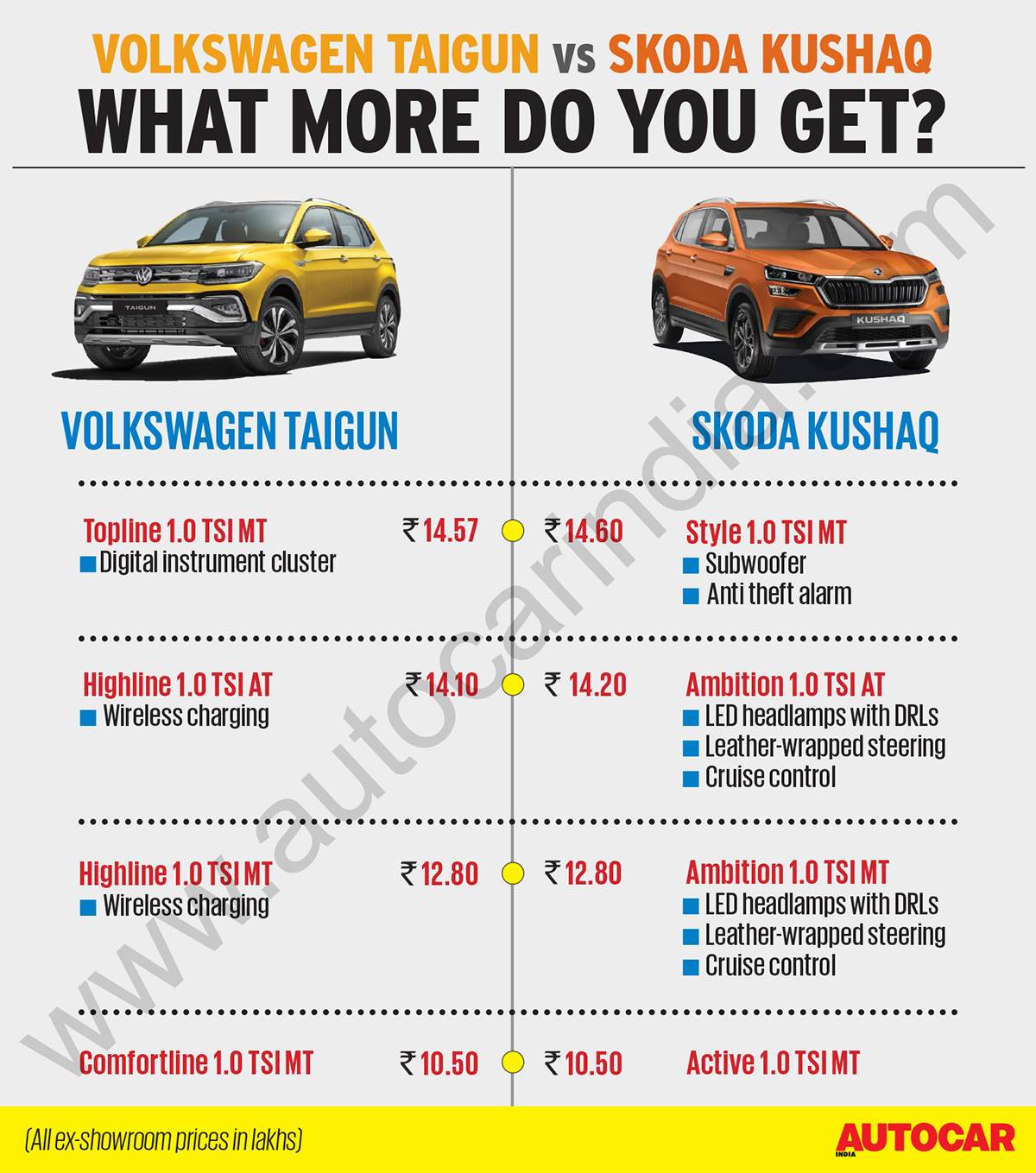 Volkswagen has reserved the Topline variant only for the Taigun 1.0-litre TSI variants manual and automatic, whereas Skoda offers the Kushaq Style variant along with both engines, 1.0 TSI and 1.5 TSI with manual and automatic transmissions. The features that this variant gets over its comparable mid variant are:

The Taigun GT 1.5 TSI is based on the mid Highline variant, so not only is it Rs 1.20 lakh cheaper than the Kushaq Style 1.5 TSI MT variant, but it is also significantly down on features in comparison.

What the GT gets over the Kushaq are listed below:

In comparison, the comparable Kushaq variant is Rs 50,000 more expensive, but it features ventilated front seats, a subwoofer, white ambient lighting and leatherette seats over the Taigun GT to justify the premium. 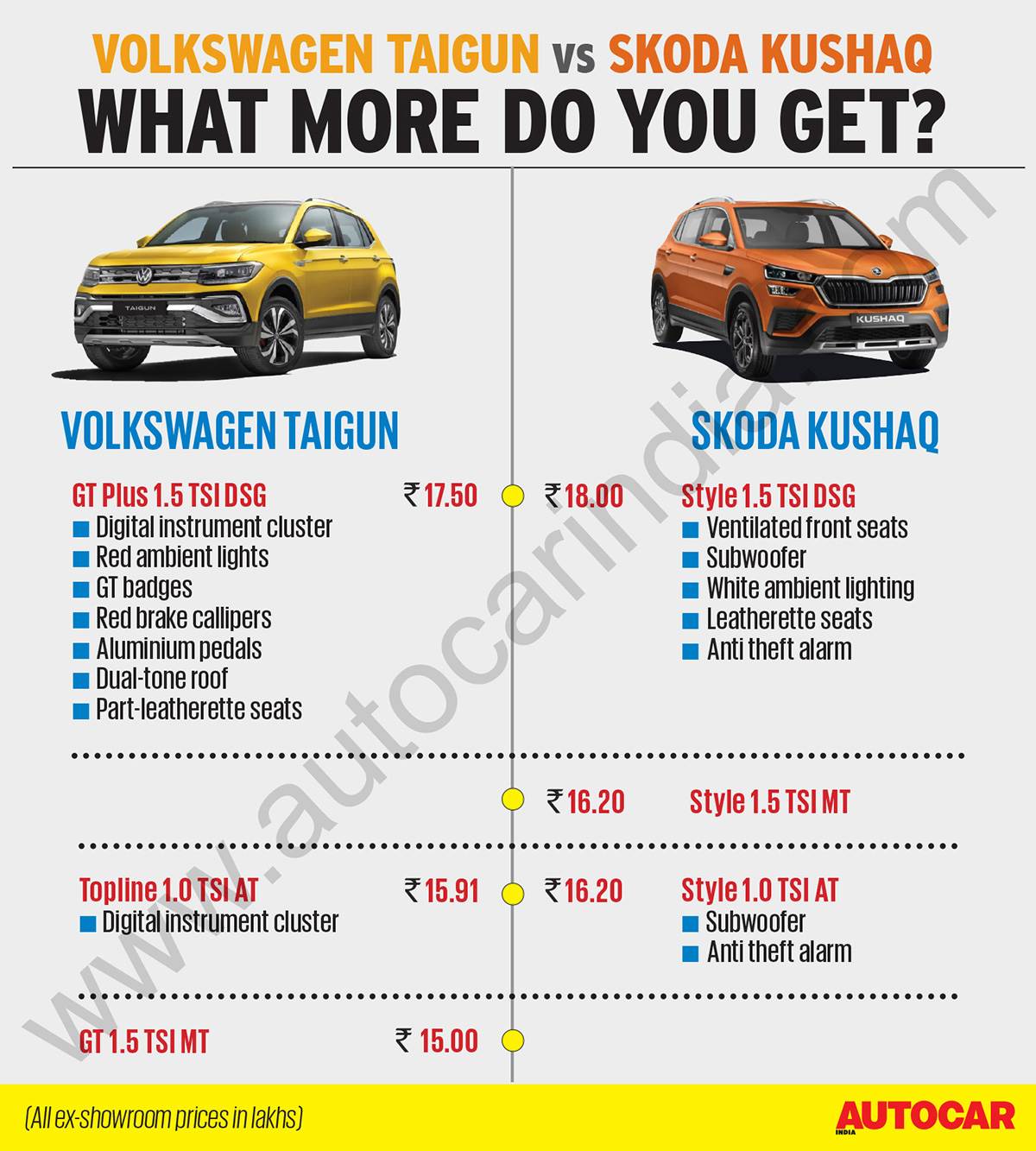 Which of these two do you prefer and why? Let us know in the comments.