Production model will have a claimed range of 250km; global model expected to come to India in the future. 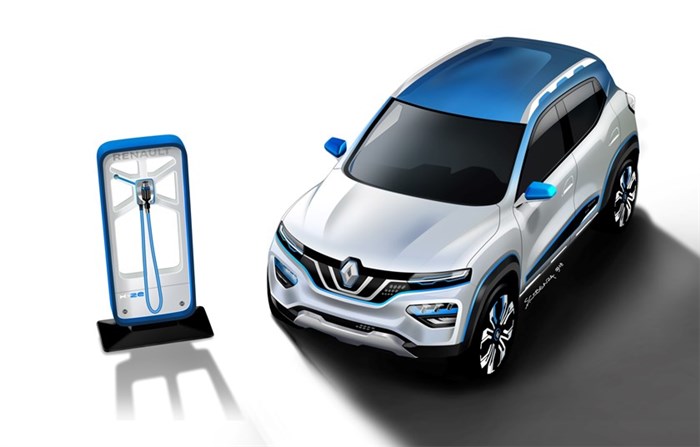 Carlos Ghosn, CEO and Chairman, Groupe Renault with the K-ZE.

On the eve of the 2018 Paris motorshow, Renault has taken the wraps off of its ‘A-segment, SUV-inspired, electric vehicle’, the K-ZE. The K-ZE that will get its global unveil at the motorshow is, in effect, the all-electric version of the Kwid. Described as a global model, the production car will first go on sale in China in 2019, before making its way to other markets around the globe. India is one of the markets in consideration for the product.

Renault has not revealed full details as yet but claims the K-ZE has a range of 250km in the NEDC cycle. The car features double charging that will be compatible with domestic plugs and public charging infrastructure. The charging port is positioned on the right flank of the car.

The K-ZE's look is a development of the standard Kwid’s now-familiar styling. The show car sports narrower headlamps, a restyled ‘grille’ with a larger Renault lozenge and a redone front bumper with a more pronounced scuff plate and larger fog lamps. Flashy (and seemingly larger) wheels as well as blue highlights across the body also help distinguish the K-ZE’s look. At the rear, the show car also carries more detailed tail lamps. Highlights within the cabin include a central touchscreen, a reverse camera and rear parking sensors.

The production K-ZE will be manufactured in China by e-GT New Energy Automotive Co, a Joint Venture with Dongfeng Motor Group and Nissan. Don’t expect Renault to be in a tearing hurry to bring the e-Kwid to India, though. Inadequate charging infrastructure aside, costs are a major issue. Renault engineers who we’ve spoken to have said that, at present, a typical EV costs at least 60 percent more to manufacture than its conventional engine-powered version. Until such time that Renault can rein in costs of components like battery packs (partially possible, if the Kwid EV clicks in China) the model is unlikely to come to India, soon.