Refreshed Audi A8 L teased ahead of India launch

The new A8 L gets cosmetic updates and new headlight technology; is likely to come with the same 340hp TFSI petrol engine. 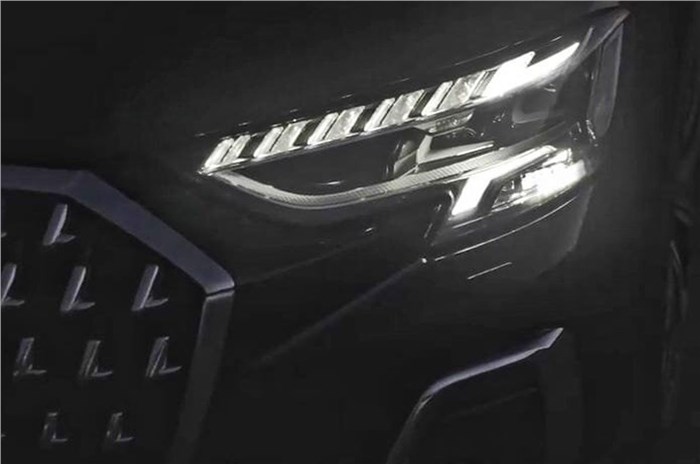 Audi has teased the new A8 L for the Indian market. The refreshed Audi luxury saloon will boast of cosmetic changes and a more advanced lighting technology.

The A8 gets a restyled front end with a wider grille that uses a bolder mesh pattern, instead of the outgoing car's slated design for the grille. The air intakes at the edges of the bumper have been angled slightly to make them look more upright.

Audi is offering the S-Line package for the first time in certain global markets, adding distinctive styling elements, including the S8-inspired blade in the side intakes. Optional black and chrome exterior packages are carried forward from the pre-facelift model, while four new metallic and five new matte shades have been added.

All the new A8 models are available with Audi's Digital Matrix LED headlights, which use approximately 1.3 million micro-mirrors to split the light into individuals pixels, much like the digital projector. This enables the car to emit a "carpet of light" into the driver's lane only.

Digital OLED brake lights are now standard, with proximity sensors that activate them in case if a car comes within two metres of a stationary A8.

Audi A8 facelift: interior and features

On the inside, the changes are less obvious. Audi says that they have updated the infotainment system to its latest MIB 3 software. It now gets two 10.1-inch infotainment screens at the back that are controlled by a tablet in the centre armrest. Optional extras include a cooler with bar compartment, fold out centre console table and perfume function.

The updated A8 L comes with 40 driver assistance systems split into several different packages. For instance, the "Park" package features Audi's remote park assist, which lets the car automatically manoeuvre in and out of the parallel or bay parking spaces without the need of a driver.

It remains to be seen how many of these features will come to the Indian market. However, considering that the updated A8 L will continue to be sold via the CBU route, it is likely that the luxury saloon will get most features, at least as optional extras.

Globally, the updated A8 L comes with six cylinder 3.0-litre diesel and 3.0-litre petrol engine options producing 286hp and 340hp respectively. There is also a plug-in hybrid that makes 461hp. Topping the range is the S8 Performance saloon which makes 570hp from its 4.0-litre V8 petrol engine. For our market, it is likely that Audi will carry forward the sole 340hp, 3.0-litre petrol engine that powers the outgoing car. The carmaker will not be getting a diesel engine in India.

Audi has confirmed that the current-gen A8 will not have a full-electric variant, with the flagship sedan set to be replaced by the production version of the Grandsphere concept as the company transitions to becoming an electric-only brand by 2033.

Audi A8 facelift: rivals and price

Expect Audi to launch the new A8 L in our market in the coming months. When launched, it will take on the likes of the Mercedes-Benz S-Class, Lexus LS, and the BMW 7-Series, whose all-new generation will be globally unveiled on April 20. The outgoing A8 model is priced from Rs 1.56 crore (ex showroom, India), and the new model is likely to be pricier. Like before, the A8 will come to India via the CBU route.