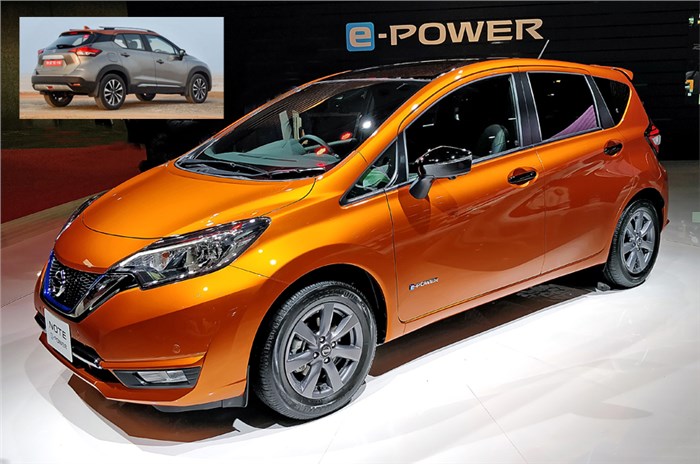 The new petrol-electric hybrid model is expected to be introduced internationally in 2020.

Nissan is reportedly working on expanding its petrol-electric hybrid line-up by introducing its Kicks with the brand’s signature e-Power tag. The model is expected to launch in Latin American markets by 2020. The Japanese carmaker’s eco-friendly powertrain technology is currently available only on Nissan’s JDM-spec models.

Nissan’s e-Power system uses a combination of an electric motor and a petrol engine, where the wheels are driven by the electric motor and the engine charges the battery and is used as a range-extender. In addition to this, the powertrain is also fitted with a power generator and inverter so the user can experience smooth acceleration and instant torque delivery, just like in pure electric vehicles.

The Japanese brand will launch the standard Kicks in India in January 2019, with 1.5-litre petrol and diesel engines as standard. However, the model for India differs from its international counterpart as it is underpinned by Nissan’s B0 platform (shared with the Terrano and Captur), while the model sold in Brazil is based on Nissan’s V platform. This means that the India-spec model is larger than the Brazilian Kicks, and may require considerable amounts of re-tooling to fit the hybrid powertrain.

Nissan India Operations president, Thomas Kuehl has previously expressed his eagerness in bringing e-Power technology to India. Speaking to Autocar India, he had said that the Note e-Power was under evaluation for localisation. “What no one is aware of is, we are really trying to make the Note in India too, we want to localise it,” said Kuehl.

Nissan is expected to launch the all-electric Leaf here next year, which happens to be one of the best-selling electric vehicles in the world.