Exciting new products from the four OEMs - the Venue, Seltos, Hector and Triber - have spurred demand in the UV market segment, which has registered a positive YoY growth in the April-October 2019 period. 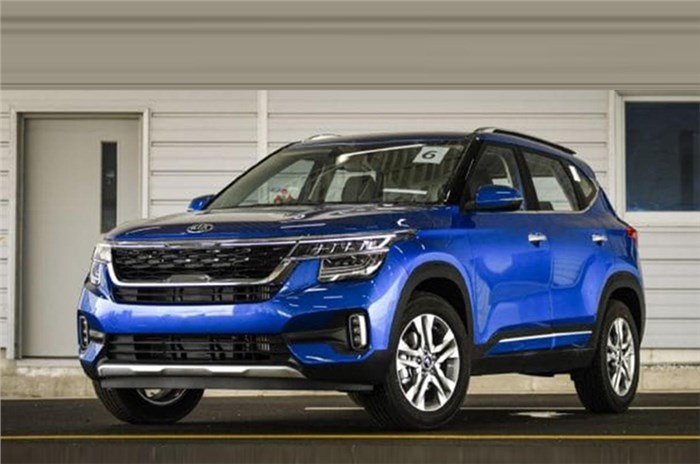 Take a close look at the Indian automotive market performance in October 2019, and the sole vehicle sub-segment that shines is utility vehicles (UVs). At 22.22 percent year-on-year growth (1,00,725 units), it not only accounts for 35.33 percent of total passenger vehicle (PV) sales (2,85,027 units) but importantly, it is also the sole category to be in the black for the first seven months of the fiscal year (April-October 2019: 5,47,572 units / 0.14 percent). Here too, it constitutes 33 percent of overall PV sales in the seven-month period.

SUVs are clearly good news for the beleaguered Indian automobile industry, which has seen 11 straight months of overall sales decline – a trend which looks like it may continue till the end of the fiscal year. A clutch of recently launched SUVs from global manufacturers are playing a key role in the resurgence of demand for this vehicle type. Unsurprisingly, their robust sales have resulted in their manufacturers expanding their UV market share, eating into established OEMs' share; this at a time when the chips are down for the rest of the industry.

On November 11, SIAM president Rajan Wadhera, while announcing the industry numbers for October 2019, commented, "The market has expanded with the entry of two new OEMs in the PV segment. A sizeable percentage of the UV growth comes from the new models in the market and it is not driven by excessive discounting. So, we can clearly see that people are giving value to novelty."

Four SUV manufacturers – Hyundai Motor India, Kia Motors India, MG Motor India and Renault India – stand out with their robust performance in October, as well as during the preceding six months of this fiscal. All the other 13 OEMs have seen their sales decline, year-on-year. While newcomers Kia and MG have just opened their sales accounts in India, Hyundai and Renault have notched 40 percent and 107 percent, respectively (see domestic sales and market share statistics below).

The Venue, which comes with three engine options – a 90hp, 1.4-litre diesel, an 83hp, 1.2-litre naturally aspirated petrol unit, and a 120hp, 1.0-litre turbocharged unit – has become the volume driver for the company; and in the six months since its launch, has been a regular in the Top 5 UV sales chart.

Kia rides high on the Seltos

Kia Motors, Hyundai's sister company, is having a great first run in India. Barely three months after the launch of its first product on August 22 – the Seltos SUV – the company has grabbed a near-5 percent UV market share.

In October, the Seltos notched its best monthly sales yet – 12,786 units – and crossed the 25,000-unit milestone in the domestic market. The carmaker reportedly sold 2,184 Seltos SUVs on the festival of Dhanteras (October 25), which is popular in India for purchase of a new vehicle, as well as other consumer buys.

Cumulative sales for the August-October 2019 period add up to 26,576 units, which constitutes a monthly average of 8,858 units, which is very good going for a new car brand in the country.

Kia Motors India says it has received over 60,000 bookings for the Seltos till now and, to ensure timely deliveries, has started the second shift to ramp-up production at its manufacturing facility in Anantapur. The company says it will not close bookings as the plant is fully capable of meeting the rising demand for the Seltos.

What is helping the BS6-ready Seltos make headway in the competitive Indian SUV market is its very aggressive pricing. The Korean carmaker's pricing strategy for all of 16 variants covers virtually every price point and starts from Rs 9.69 lakh (for the entry-level petrol Smartstream G1.5 HTE model) and goes up to Rs 15.99 lakh (for the diesel 1.5 CRDi HTX plus (6AT) and Petrol Smartstream 1.4 T – GDI GTX (7DCT) and GTX plus top-end variant). With this, it takes on rivals like the Hyundai Creta, MG Hector, Nissan Kicks, Mahindra XUV500 and the Renault Captur in India.

The other brand-new car manufacturer to enter the Indian market is MG Motors, which launched the tech-laden Hector on June 27 this year. In October, the Hector – which comes in four diesel variants, two petrol-manual variants, two petrol-automatics and three petrol-hybrids – sold 3,536 units. This constitutes a growth of 35.5 percent over September (2,608 units) with total sales in the August-October period being 9,670 units and giving it a UV market share of 1.77 percent – good going for a new brand in India.

On Dhanteras, MG Motor India delivered 700 Hectors. In Delhi-NCR the company delivered around 200 cars from a single point, which it says marks one of its largest delivery events.

MG Motor India has close to 40,000 bookings in hand, keeping the midsize SUV sold out until February 2020. It now aims to clear the entire backlog till February with the second shift at its plant in Halol, Gujarat, having begun this month. On October 22 (four months after it launched the SUV in India) the company achieved the milestone of rolling out the 10,000th Hector.

“The MG Hector continues to further strengthen its position in its segment and win the hearts of our customers. As we gradually ramp-up our production, we aim to ensure the highest levels of customer satisfaction through timely vehicle deliveries," said Rakesh Sidana, director, sales, MG Motor India.

Renault India looks to be making a comeback in the UV market, thanks to the recently launched Triber which, along with the Duster, Captur and Lodgy makes up its UV range. In October, the French carmaker sold a total of 6,084 UVs – up 504 percent, albeit on a low year-ago base. For the April-October 2019 period, the company has 18,728 UV units to its name, which marks handsome 107 percent YoY growth.

The sub-four-metre, seven-seat Triber is making a speedy difference. Launched on August 28 at an aggressive Rs 4.95 lakh (through to Rs 6.49 lakh for the top-end variant) the Triber's compact size, spacious interiors and flexible seating configurations, along with the price, seems to be drawing buyers. The seven-seat model is available in four variants and comes with one engine and one gearbox. The Triber is one of two compact (under 4m) seven-seaters offered in the Indian market; the other being the Datsun Go+. With all seats in place, the Triber's boot space is all of 84 litres. However, the rear-most seats can be removed altogether, increasing luggage room to an impressive 625 litres. Besides the SUV-like styling, the Triber's 182mm of ground clearance also helps the model look more muscular.

For Renault India, which sold 11,516 PVs in October 2019 (62 percent YoY), the Triber has turned out to be quite a game-changer. Within less than three months of its launch, the SUV has sold over 10,000 units. “With 10,000 cars already delivered and a strong bookings pipeline, we have ramped up the production and are taking concerted efforts to further accelerate production to enable faster deliveries and best in class quality. Together with the metro cities, the Triber has seen wide acceptance in the rural markets as well, and we have a robust strategy to build our presence across these markets, which offers significant growth potential,” said Venkatram Mamillapalle, country CEO and managing director, Renault India Operations.

The entry of new models and new OEMs, in the form of Kia and MG, has had an impact on the established UV players to some extent. Club the Korean family of Hyundai and Kia and what you get is a combined market share of 24 percent – nearly one-fourth of India's UV market. While Maruti and Mahindra control two-fourths, 13 other players fight for bits and pieces of the last quarter share.

Five months left for the close of FY2020 and with BS6 looming around the corner, UV makers – who are also cognisant of the marked consumer shift to petrol-powered UVs – will be putting their shoulder to the wheel to make the most of what is seen as a revival of demand in this segment. They should be readying a raft of new products to be launched when FY2021 – and a new emission-grade era – begins. 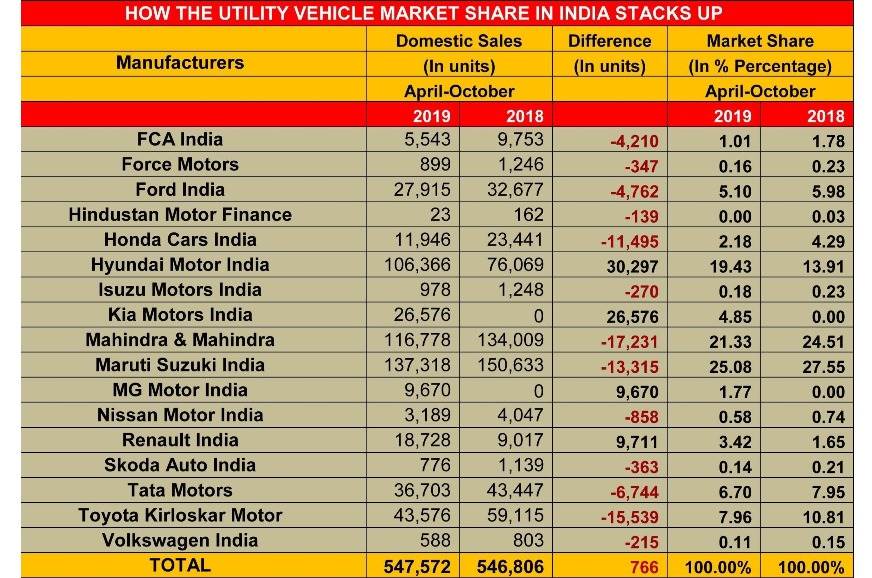