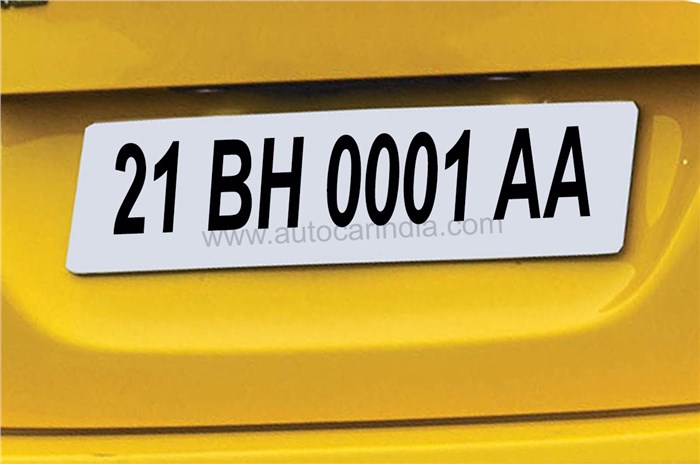 The new BH series plates will be available to personnel from defence, Central and State government and select companies.

As a MoRTH notification stated, this facility will be available on a voluntary basis to defence personnel, Central and State government PSUs and private sector companies having their offices in four or more States/Union Territories (UT).

The format of the Bharat series will include the year of vehicle registration, the BH code for Bharat Series, numbers and alphabets.

As per the new BH Series, the road tax will be levied for two years or in multiples of two. The MoRTH notification states, “After completion of the 14th year, the motor vehicle tax or road tax shall be levied annually, and it will be half of the amount which was charged earlier for that vehicle.”

The scheme will facilitate free movement of personal vehicles across states and UTs upon relocation to a new state/UT.

Current process for moving cars to a new state

Currently, under Section 47 of the Motor Vehicles Act, a vehicle owner is not allowed to keep a vehicle in another state for more than 12 months and it has to be re-registered with the new state. To do this, the vehicle owner has to get an NOC from the parent state to register the vehicle in the new state. Also, the vehicle has to be assigned a new registration mark after the road tax on pro-rata basis is paid in the new state. This has to be followed by an application for refund of the road tax in the parent state on a pro-rata basis. Presently, its rather cumbersome to say the least.

Government greenlights vehicle scrappage policy - all you need to know

No more registration charges for electric vehicles in India