Hyundai’s all-new Creta will feature an all-black interior with red accents and red contrast stitching on the highest-spec SX(O) trim level of the turbo-petrol model. 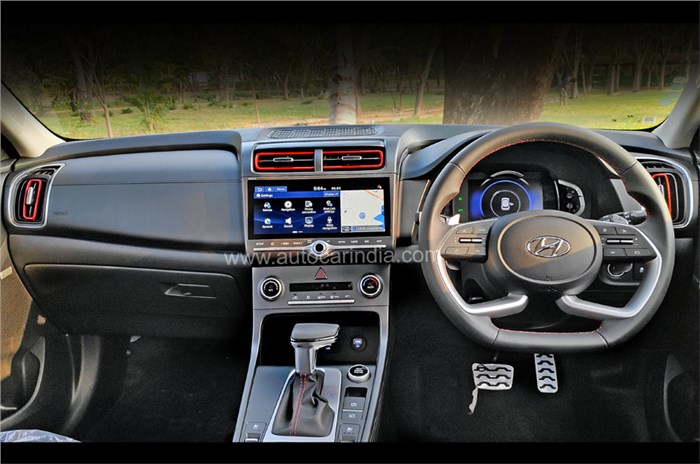 The second-gen Hyundai Creta is slated to be launched on March 17, 2020. In the lead-up to the launch, we got to visit Hyundai’s production plant to see how the new SUV is being built. At the plant, more details were revealed about the top-spec SX(O) version of the turbo-petrol model.

On the inside, the layout is the same across all models, however the SX(O) turbo-petrol model features an all-black interior with red accents (visible on the AC vents) and contrast red stitching on the seats, armrest and steering wheel. This combination is reminiscent of the interior of the turbo-petrol versions of the Hyundai Grand i10 Nios hatchback and the Aura compact sedan.

Under the hood, this version comes with a 1.4-litre, four-cylinder, turbo-petrol engine (same as the unit on the Kia Seltos) which will be paired to a 7-speed DCT-automatic gearbox with paddleshifters. This variant also comes with disc brakes at the front and rear. Hyundai will also offer a 115hp, 1.5-litre naturally-aspirated petrol engine and a 115hp, 1.5-litre turbocharged diesel motor. Both engines will get a 6-speed manual, though the petrol unit will come with a CVT-automatic gearbox while the diesel models will come with an optional torque-converter automatic gearbox.

Hyundai has already begun to accept bookings for the new Creta, with deliveries expected to start on the same day as the launch. The all-new Creta will compete in the crowded midsize SUV segment in the Indian market, with rivals like Kia Seltos, MG Hector and the Tata Harrier in the mix.