More MG Hectors to be produced from November

The Chinese-owned British brand will hire 500 new employees to start a second shift at its plant in Halol, Gujarat. 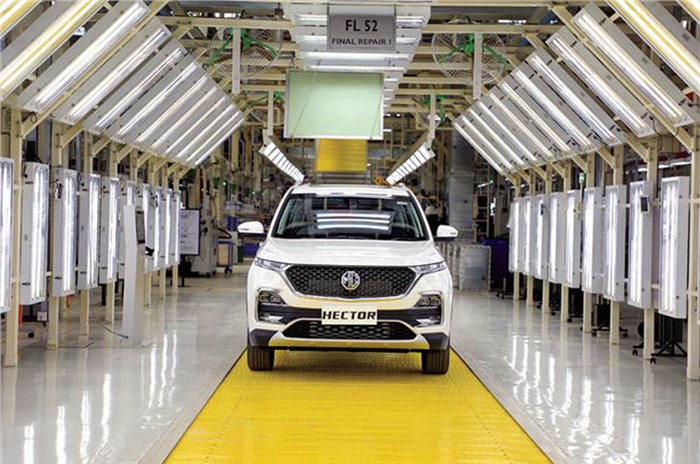 While the ongoing slowdown in the Indian automobile industry has led to record job losses, Chinese-owned British carmaker MG (Morris Garages) Motors continues to hire workers for its India expansion.

MG Motor India has begun hiring 500 additional workers as it looks to start a second shift at its manufacturing plant in Halol, Gujarat, to match the growing demand for its recently launched Hector SUV. Ironically, the development comes at a time when the automobile industry in India has been witnessing massive job losses due to a slowdown since the past several quarters.

A senior executive at the company said, “We now have our second shift starting in November as our global supplier base has supplied and supported us and that has also helped us to attract additional employees in our workforce.”

According to Gaurav Gupta, chief commercial officer, MG Motor (India), the induction of new workers is across job profiles required for the running of the plant, which has the capacity to manufacture 80,000 units annually in three shifts.

Earlier, MG Motor had to temporarily stop accepting bookings for its Hector SUV in July, following the selling out of its planned quota for the year. The number of bookings for the company currently stands at 42,000 units, around 8,000 units of which came in the 10 days since it reopened the bookings from September 29. An estimate done by the company indicates that bookings will cross the 50,000-units mark by the year’s end. Production of the Hector touched around 3,000 units in September and the company plans to ramp it up to 3,500 units in the next few months.

MG Motor plans to invest Rs 2,600 crore within the next few years, primarily to ramp up the capacity, taking the company’s total investment in India to Rs 5,000 crore. The company, which has sold a total of 6,134 units in August-September 2019, expects to sell around 2,600-2,800 units in October.

MG Motor insiders claim that, right from the start, the company has followed the strategy of having a few retailers and only those with the required bandwidth to expand when required are taken on board.

A similar strategy has been adopted by few rival manufacturers, including Toyota and Volkswagen, among others, insiders add. The prudence behind having few partners, analysts claim, is that the retailers do not end up cannibalising the pie in a given market.

At present, MG Motor has partnerships with 44 retailers, operating 120 outlets across India. The company plans to augment the number to about 250 outlets from mostly the same set of retailers, as they get the first right of refusal while opening of a new outlet. About 130 outlets of the total 250 are planned to be ‘light investments’ not requiring much of capital expenditure.

Further, MG Motor has also adopted a strategy of helping the retailers in the first year of partnership by offering to provide recurring costs associated with setting up of aftersales services and maintenance. This, the executives claim, is being done because the revenue from maintenance comes only after about a year of a car’s sale. They add that this is being done due to the learning from how India behaves, as dealers who had lesser volumes of brands that produce 2,000-3,000 units, started short-changing customers in the workshop at Rs 25,000-50,000 per service, instead of the real cost of about Rs 5,000, thereby killing  the brand subsequently. “The customers start presuming that the brand is expensive to maintain,” is what the executives say.

Experimenting with a subscription model

MG Motor has tied up with Miles for its subscription model, though it will be able to pull it off only by December when it brings some cars into the segment. Further, the company is also said to be in talks with Zoom and Rev for the same, though any partnership with them many happen at a later stage.

Also, according to a trend observed by MG Motor, most of the customers migrating to their product come from SUV models like Renault’s Duster, followed by Hyundai’s Creta and Verna, and the Honda City sedan as well. Also, 10-15 percent of buyers are those who already own an Audi or a BMW, and who may use the Hector as a second or third car as an alternative to the entry model in the mentioned brands.