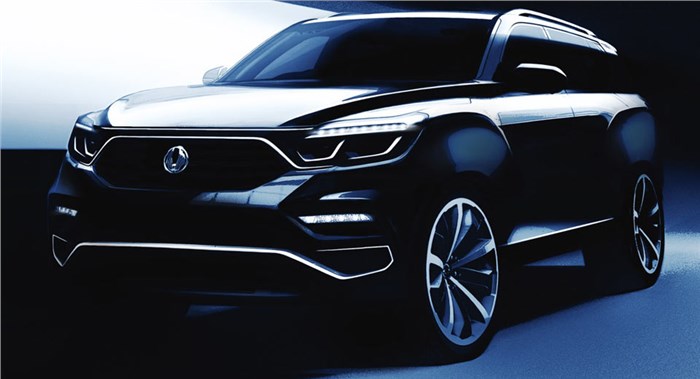 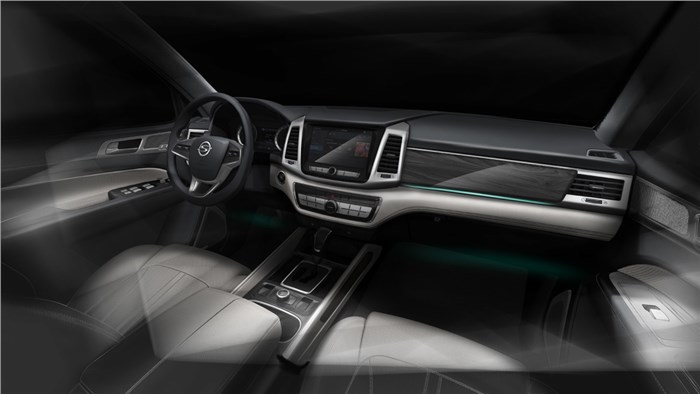 We reported earlier that the next-gen SsangYong Rexton will be a production version of the SsangYong LIV-2 concept which is heading to India. This new SUV will be sold as a Mahindra product in India and will be positioned above the XUV500, its current flagship model in India.

This new SUV, codenamed Y400, is set to receive a global unveil next month at the Seoul Motor show 2017. Ahead of the show, SsangYong has released a first set of sketches of this new model which show the vehicle’s final exterior styling and interior layout.

As seen from the sketches, the production SsangYong Y400 SUV gets a mild tone-down in styling as compared to the LIV-2 concept shown earlier.  Up front, the bumper and grille more or less resemble the concept’s styling. The bumper also gets prominent chrome accents that run across the width. Additional chrome, laid out in similar design, can be seen running across the grille too. The SUV gets prominent LED daytime running lamps on the bumper with additional LED units above the headlights and on the inserts too. The bonnet has strong creases at each end that originate from the A-pillar.

The India-spec SUV will get a few design tweaks. The design team, in keeping with the Mahindra family face, is developing an all-new grille with distinctive vertical elements.

Moving on to the sides, there are muscular-looking flared wheel arches for the front and rear wheels. There is more chrome spread across the length of the SUV just below the doors. The alloy-wheel gets rugged-looking design and, overall, goes well with the SUV’s styling.

On the inside, the Y400 will get a traditional dashboard layout with a large touchscreen display taking centre stage.  This new screen is likely to be a 9.2-inch infotainment screen with a host of functions that include Wi-Fi, Apple CarPlay and Android Auto connectivity. All these can even be controlled from a rear console. The Y400 will give special focus to the rear seat passengers as well, with 10.1-inch displays in the back of the front head rests and individual ‘captain’ seats that may come with a massage function. Other features that are expected to be present are special mood lighting in the cabin to give a lounge-like experience, electric sidesteps and technology that creates an illuminated path for occupants approaching or leaving the car.

The new SUV is likely to be around 4.85m long, 1.96m wide and 1.8m high, this means that it will be a full-size, seven-seat SUV pitted head-on against the Toyota Fortuner and Ford Endeavour. The concept’s 2,865mm wheelbase is a substantial 120mm more than the Fortuner’s, which could potentially give it far better interior space.

For India, this new SUV is likely to be powered by a 184hp, 2.2-litre, turbo-diesel engine that churns out a healthy 420Nm of torque. This engine will be mated to a six-speed manual or a seven-speed automatic. There will be a 225hp, 2.0-litre, petrol engine on offer too, which is likely to join at a later stage.

As mentioned earlier, this new SUV will be unveiled at the Seoul Motor show next month. For India, the launch is expected by end of 2017. Expect this SUV to be christened with Mahindra nomenclature (most likely XUV700). The Y400 will be the new flagship in Mahindra’s range and an important brand builder for the company. According to company sources, the Y400 could undercut the Fortuner by a massive Rs 4-5 lakh.