The TUV300 will also feature the new Eco Mode. The compact SUV will be equipped with an AMT gearbox. 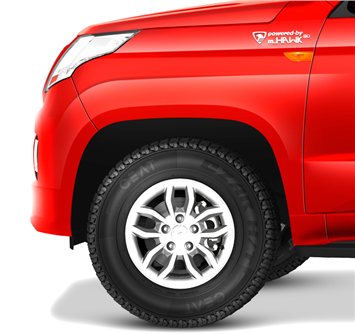 Mahindra is all set to launch its first grounds-up compact SUV, the TUV300 on September 10, 2015. Bookings for the new SUV have already commenced with dealers promising deliveries around September 17, right in time for the Ganesh festival.

The TUV300 is the second compact SUV from the carmaker, the first being the Mahindra Quanto. Spy pictures of the undisguised TUV300 have been seen on the internet, and it clearly shows the SUV’s angular and upright design. On the inside, the TUV300 gets a 5+2 layout with two jump seats behind the second row. The interior will get dual-tone upholstery and a number of creature comforts and safety features depending on variant. Sources tell us that ABS and dual front airbags will be offered as an option, even on base trims of the compact SUV.

As a method to keep costs low, Mahindra TUV300 will share a lot of parts with other offerings from the manufacturer, both on the body and under the skin to keep costs in check. Dealers tell us that it will also feature the Micro Hybrid technology available on various Mahindra products like the Scorpio. This means the TUV300 will get the start-stop option that helps save fuel and reduce emissions. This system will allow the engine to shut off completely when the vehicle comes to a halt, for example at traffic signals. The engine comes to life again once the driver presses the clutch. The TUV300 will be the first compact SUV to feature this fuel-saving technology.

The TUV300 is also likely to come with a new Eco Mode. This feature is expected to be similar to the one seen on other newly launched vehicles like the Tata Zest. When active, the mode balances engine power for driving and AC usage and helps deliver optimum fuel economy.

The Mahindra TUV300 will be powered by the new mHawk80 1.5-litre diesel engine, expected to be a revised version of the 1.5-litre three-cylinder unit seen on the Quanto. We expect Mahindra to price the base variant of the TUV300 at around Rs 7.3 lakh (ex-showroom).