The Kia Sonet currently only gets iMT and DCT gearboxes for its 1.0 T-GDi engine, but a manual could be added if there is demand for it. 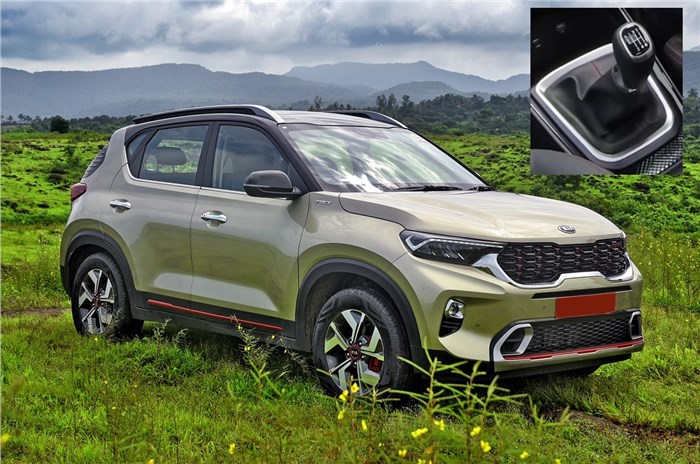 The Kia Sonet is the latest entrant in the compact SUV space, and launched at a rather competitive (and introductory) starting price of Rs 6.71 lakh (ex-showroom), is poised to shake things up in the segment. Rather interestingly, Kia Motors India decided against giving the 1.0-litre turbo-petrol version of the Sonet a traditional manual gearbox, and instead launched it with a 6-speed iMT (intelligent manual transmission). Why did Kia opt to go with the iMTinstead of a proper manual? Let’s get right into it.

Why does the Kia Sonet 1.0 turbo-petrol forego a manual gearbox?

While all compact SUVs on sale today have an automatic transmission option, the Hyundai Motor Group has ushered in the era of the ‘clutchless’ iMT in India. The system eliminates the need to manually operate the clutch – and the clutch pedal itself –taking away a great degree of discomfort from stop-start city driving. The technology debuted on the Hyundai Venue 1.0 turbo-petrol a couple of months ago, and is now available with its cousin, the Kia Sonet as well.

However, unlike the Venue – which offers the iMT as an alternative to a manual gearbox – the Sonet does not offer the same choice, with the iMT being the only transmission option for the turbo-petrol engine that lets you row through the gears with a traditional H-pattern gear shifter. Responding to a query by Autocar India, Manohar Bhat, head of sales and marketing at Kia Motors India, said the extra convenience afforded by the iMT was the main reason for the company picking it over a proper manual.

“The iMT will be the transmission of the future. It is a better manual gearbox which doesn’t require manual operation of the clutch. The 1.0-litreturbo-petrol is for people looking for enthusiastic driving; the iMT adds convenience to it and hence we are only offering an iMT with this engine”, said Bhat.

Will the Kia Sonet 1.0 turbo-petrol get a proper manual in the future?

Given that its cousin already offers the option, the Sonet, too, could get the same 6-speed manual gearbox, and Kia is open to the possibility of introducing a proper manual for the Sonet 1.0 Turbo if market demand necessitates it.

“Kia is committed to providing customer-centric solutions, and if the market demandsa manual gearbox with the 1.0 Turbo, we will not hold ourselves back from offering it. As of now, we will look at the response from our consumers”, added Bhat.

If Kia does bring in a manual option for the Sonet 1.0 Turbo, expect it to cost around Rs 20,000 less than the equivalent Sonet iMT variant.

When will Kia Sonet GTX+ automatic prices be revealed?

At launch, Kia didn’t reveal prices for the fully-loaded GTX+ petrol- and diesel-automatic versions of the Sonet, but the company will announce those in the coming weeks.

Do you think Kia should offer a manual option for the Sonet 1.0 turbo-petrol? Let us know in the comments.