Maruti continues to remain dominant, with seven bestsellers; two Hyundais and one Honda round out the list. 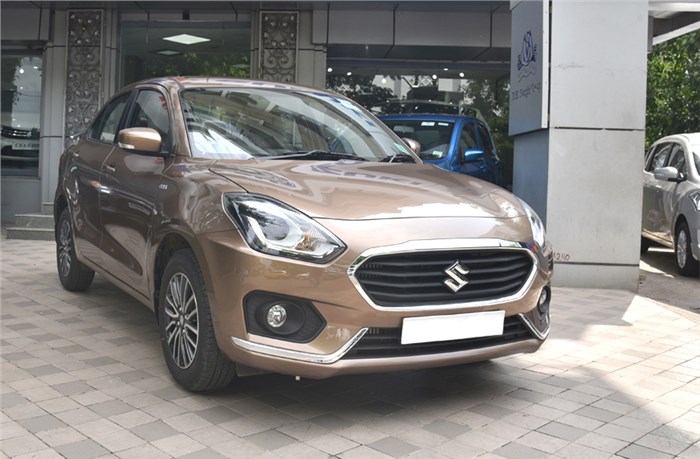 Even as the overall passenger vehicle segment, and within that the passenger car sub-segment, fell by 24 percent and 33 percent, respectively, in September 2019, there's no denying the fact that Maruti Suzuki India's hold over the passenger vehicle (PV) segment continues unhindered. And, it will be some time before there is a serious challenger to take it on in the Top-10 bestselling PVs or passenger cars list in India.

With sales of 16,662 units last month, the Maruti Dzire is ahead of its sibling, the Alto, by just 583 units. If only September had one more day, then the Alto, which averaged daily sales of 502 units, would have come closer to matching its bigger brother!

Maruti is revving up its act to drive sales and the petrol model is being offered with benefits of up to Rs 60,000 across all its variants. The Dzire is powered by Maruti’s tried-and-tested 1.2-litre petrol and 1.3-litre diesel engines, both available with either a 5-speed manual or a 5-speed AMT gearbox option. The petrol unit has been upgraded to meet BS6 norms, with the diesel set to meet its end closer to the April 2020 deadline.

The Maruti Suzuki Alto, the No. 2 in September, with 15,079 units, continues to be India's most popular entry level hatchback. Again, like the Dzire, its September sales are an improvement over August (10,123 units) and July (11,577 units), albeit less than the 18,733 units in June and 18,070 units it garnered in May 2018. The Alto was recently updated with a host of safety features and was also introduced with a BS6-compliant engine, a full 11 months ahead of the April 2020 deadline. The car also received a cosmetic makeover and meets the upcoming crash- and pedestrian-safety regulations.

Additionally, the Swift now also gets more safety features as standard. To comply with AIS-145 safety norms, all variants now get a co-driver seatbelt reminder, a speed alert system, and rear parking sensors as standard. Like with the Dzire, Maruti is currently selling the Swift with handsome discounts.

The new Maruti Wagon R drives in at fourth place with 11,757 units, a tad more than August's 11,402 but down on July's 15,062. In H1 FY2020, the new petrol-only Wagon R has sold 74,316 units. Unlike its predecessor, the new Wagon R is offered with a choice of petrol engine options – the familiar 1.0-litre K10 unit and the new-for-the-model BS6-compliant 1.2-litre K12 petrol unit that’s also used by the Swift and Dzire. Buyers can additionally opt for a factory-fit CNG model based on the 1.0-litre car.

Fifth position in the Top-10 bestsellers' list belongs to the Maruti Baleno with 11,420 units, marginally better than August's 11,067 or July's 10,482 units. The Baleno was the first in the Maruti stable to receive a BS6 upgrade earlier in April, whilst also getting a new 1.2-litre DualJet K12C petrol motor coupled with mild-hybrid technology. Between April-September 2019, the Baleno has sold a total of 79,189 units (92 percent or 73,133 of them being petrol variants), which is down 18 percent on year-ago sales of 1,11,964 units. Blame that on the downturn.

Two Hyundai hatchbacks take the next two positions. The Elite i20 is at No. 6 with 10,141 units. Before Hyundai’s i20 came along, the typical Indian car buyer was reluctant to spend big money on a premium hatchback. The model almost single-handedly started what is now the premium hatchback segment in the country, and every month convinces an average of nearly 9,000-odd buyers to take home a new model.

At No. 7 is the Hyundai Grand i10 (which rolled out in its Nios avatar recently) with 9,358 units, 8,988 of which petrol variants. The Nios builds on the strengths of the original Grand i10 and offers even more, in a sophisticated package. Buyers also have plenty of version options to go for, with the Nios available with petrol and diesel engines, each offered with manual and AMT auto gearboxes.

There's a brand-new player in the Top-10 list as the just-launched Maruti S-Presso checks into the sales charts with 5,006 units. The SUV-inspired hatchback – which was launched on September 30 and is priced in the Rs 3.69-4.91 lakh bracket – received over 10,000 bookings within just 10 days of its launch. While its high-sided design may be polarising, it’s something Indian consumers really seem to like – the tall, boxy design has helped liberate quite a bit of room in the cabin. Its BS6-compliant K10B engine, which develops 68hp and 90Nm of torque, is quiet, smooth and offers enough performance for pottering around in the city and comes with the promise of excellent mileage figures (ARAI-rated 21.4-21.7kpl, depending on the variant). Like its rivals in the budget hatchback segment - the Renault Kwid and the Datsun Redigo – the S-Presso also comes with manual and AMT gearbox options.

Top-spec versions are decently equipped – Maruti’s 7.0-inch SmartPlay touchscreen infotainment system (with Android Auto and Apple CarPlay support) and steering-mounted audio controls are on offer – though base variants are a bit barebones. You will get to hear more of this car in the coming months, that's for sure.

The Honda Amaze compact sedan, with 4,823 units, is the ninth on this list, down 42 percent on year-ago sales of 8,401 units. The second-generation model was launched last year and has been a strong seller for Honda. It is offered with the choice of either a 90hp 1.2-litre petrol engine paired with either a 5-speed manual or a CVT gearbox, or a 1.5-litre diesel engine that makes 100hp with the 5-speed manual and 80hp with the CVT gearbox option. However, the automatic gearboxes are not offered in the top-end variants, which might be a downer for some buyers. Honda is offering benefits of up to Rs 53,000 on this model, including maintenance programmes and an extended warranty.

Wrapping up the bestsellers-for-the-month list is the Maruti Celerio hatchback, the seventh Maruti model here. At 4,140 units in September, it is 55 percent down on year-ago sales and also two ranks down.

Will the passenger car segment see better days in the coming months? The answer is blowing in the wind, and in the much-awaited scrappage policy.