Here are the five most important things to keep in mind about Hyundai’s answer to the Mahindra XUV300, Maruti Suzuki Vitara Brezza and Tata Nexon. 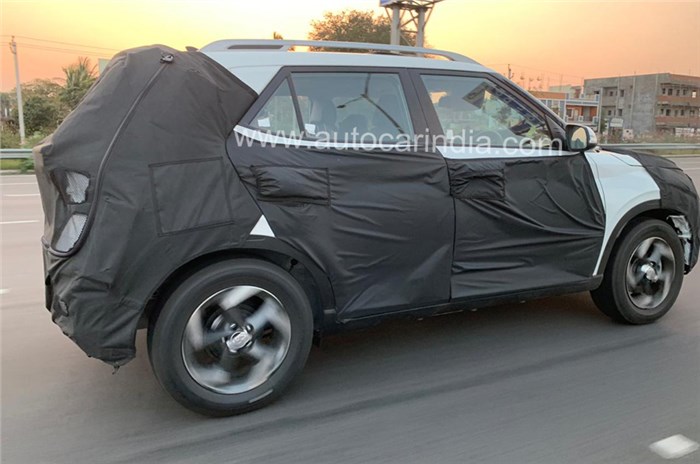 The SUV market in India is growing quite rapidly, with new entrants launching every few weeks. The compact SUV segment, in particular, has recently seen the introduction of the Mahindra XUV300, which is priced and positioned so that it punches above its weight, even taking on the likes of the larger Hyundai Creta. The Korean brand is readying its own answer to the XUV300 and its ilk – the Ford EcoSport, Maruti Suzuki Vitara Brezza and Tata Nexon.

Here’s what you can expect from the production-spec model of the Hyundai QXi:

Based on the spy shots of the Hyundai QXi testing, the compact SUV will sport design elements that can be seen in the rest of the Korean brand’s range. The nose of the QXi will feature the split DRL-headlamp setup found on the Hyundai Kona and new Santa Fe, along with the brand’s cascading grille. From the side, it may be difficult to differentiate between the QXi and Creta as the smaller SUV will have a very similar silhouette. The tail-lamps will be LED units, at least on higher-spec variants. We’ll get our first proper look at the production-spec Hyundai QXi at the New York International Auto Show, which will begin on April 17, 2019. At the motor show, we’ll also find out what the model will be called; speculation has suggested the Hyundai Styx name will be used.

The QXi will be the second model in the compact SUV segment to have three engine options – a 100hp, 1.4-litre petrol engine and 90hp, 1.4-litre diesel motor (both four-cylinder mills are shared with the Hyundai Verna), along with a new 1.0-litre three-cylinder turbo-petrol engine. While the four-cylinder petrol and diesel engines are expected to be mated to a 6-speed manual transmission, the 1.0-litre engine, which is expected to produce 100hp and 172Nm of peak torque, will be paired to a 7-speed dual-clutch automatic.

A point to note here is that the Nexon, EcoSport and XUV300 all do get the option of a turbo-petrol engine. The Tata and Mahindra have 110hp, 1.2-litre motors, while the EcoSport is powered by a 125hp, 1.0-litre engine. However, the dual-clutch automatic on the Hyundai will make it unique in the segment; Ford used to have a dual-clutch automatic on its EcoSport but was replaced by a more cost effective 6-speed torque convertor automatic. The Nexon, meanwhile, comes with a 6-speed AMT option and the XUV300 will get a diesel-AMT combination at a later date.

The cabin area of a Hyundai car is generally plush and premium, at least compared to its competition. The QXi is expected to follow the trend as it will share a number of premium bits with its larger siblings such as the dashboard, seats and overall theme. While a previous spy image of the Hyundai QXi showed an all-black interior, a Creta-esque dual-tone finish is likely too. The QXi’s cabin is also expected to be practical and comfortable as it will sport cubbies in the doors and behind the gear lever for bottles and knick-knacks and come with a wide front centre armrest and adjustable headrests. The spied model also seemed to possess a decent amount of legroom for the rear passengers.

It is expected with segment-first features

In order to match the more feature-rich compact SUVs like the Mahindra XUV300 and Ford EcoSport, the Hyundai QXi is also expected to get segment-first features like ventilated front seats. The dashboard will have a large touchscreen infotainment (with Android Auto and Apple CarPlay), and the cabin is expected to be roomier thanks to a sunroof (at least on the top-spec variant). In terms of safety kit, the QXi is expected with dual front airbags, ABS and rear parking sensors across the range while the top-spec variant is expected with seven airbags, a reversing camera and more.

It’ll be a premium compact SUV

Based on the features, the pricey dual-clutch automatic and Hyundai’s penchant for pricing, the production version of the QXi is expected to be priced on the higher side of the compact SUV segment. This means that the Tata Nexon and the Maruti Suzuki Vitara Brezza are expected to undercut the Hyundai while the Mahindra XUV300 and Ford EcoSport are likely to have a price tag at par with the QXi. Stay tuned for more information.