With just a few weeks to go for its global debut, a new promo reveals key details about the Hyundai QXi compact SUV; to launch within the next two months. 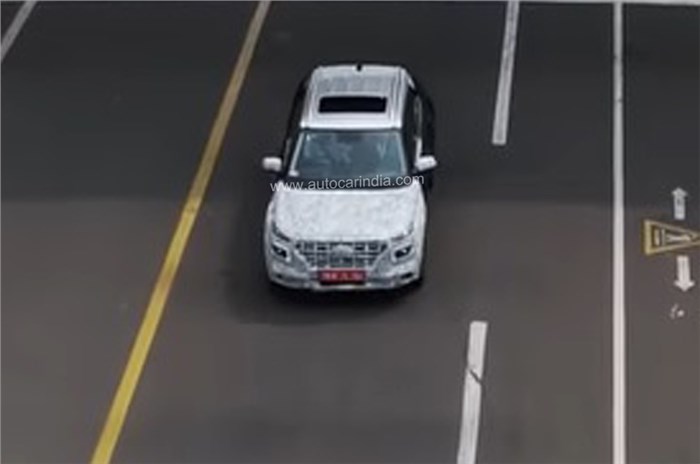 It started off as the Carlino concept that was revealed at the 2016 Auto Expo in Delhi, and now, three years later, it’s about to come to life – yes, the Hyundai QXi compact SUV is almost ready to hit showroom floors. With the launch just around the corner, Hyundai has now released a teaser video that confirms a few details about the QXi compact SUV.

The promo, which shows the QXi compact SUV make its way out of Hyundai’s manufacturing facility in Chennai, Tamil Nadu, features a camouflaged test mule, much like the ones we’ve seen in numerous spy shots so far. What is clear that in terms of styling, the Hyundai QXi will sport the company’s new design language for SUVs with a split DRL and headlight setup – similar to that of the Tata Harrier – and the same as seen on the Kona, new Santa Fe and Palisade. The QXi gets a chrome-lined lattice grille, pull-type door handles, roof rails, dual-tone alloy wheels and a glasshouse that’s nearly identical to that of its big brother, the Hyundai Creta. The ‘baby Creta’ silhouette will no doubt work in the QXi’s favour, as the Creta has developed quite the following over the years.

The QXi will, in true Hyundai fashion, be loaded to the roof with features. The promo confirms the QXi compact SUV will have a sunroof, and you can also expect a large touchscreen infotainment system with Android Auto and Apple CarPlay, disc brakes on all four wheels and a long safety feature list on the top-spec variant. Hyundai could also choose to go down the Mahindra XUV300 path and equip the QXi with a number of segment-firsts such as ventilated front seats.

The big news is that while the 1.4-litre petrol and diesel engines will likely be offered with a 6-speed manual gearbox, the 1.0-litre turbo-petrol will be paired to a 7-speed dual-clutch automatic gearbox, which will make the Hyundai QXi only the second compact SUV to get a dual-clutch auto ’box.

The Hyundai QXi compact SUV is set to make its global debut at the New York International Auto Show, which begins on April 17, 2019, and will be launched in India in the coming months. The QXi will have stiff competition in the form of the Maruti Suzuki Vitara Brezza, Tata Nexon and the Mahindra XUV300, which has received over 13,000 bookings in just a month since launch.