India-bound five-seater WR-V is Honda’s answer to the i20 Active, Fiat Avventura and the Etios Cross. 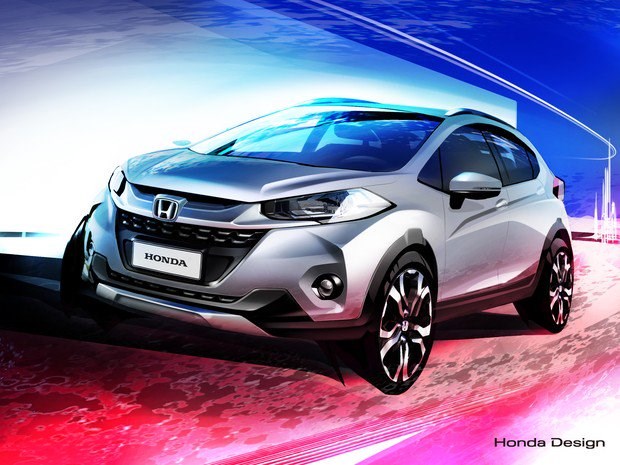 Honda is readying an all-new crossover-hatchback based on the Jazz hatchback. This new model will be called the Honda WR-V and is headed to India sometime around March next year. Honda will unveil the WR-V at the upcoming Sao Paulo Motor show 2016.

Honda South America has released a first sketch of this new model that gives us an idea of its design. Up front, Honda’s new crossover gets an aggressive front bumper with muscular touches along with a prominent chin. The headlights will differ from the Jazz and will get its unique kink at the bottom. The grill gets a thick chrome band similar to one seen on the recent Honda models like the BR-V.

Moving on to the sides, the WR-V will get muscular front fenders and prominent body cladding on the wheel arches and on the doors in order to achieve a rugged-look. The doors and the rear fender are likely to be shared with the Jazz but at the back, the WR-V will get a different tailgate with the license plate moving below on the bumper. On the insides, expect the WR-V to share interior bit and seating from the Jazz in order to keep costs in check. Honda will however add subtle differentiating bits on the WR-V’s interior.

Under the hood, the WR-V will get the same engine and gearbox options as the standard car. These include the 90.0.6hp, 1.2-litre, i-VTEC petrol engine, borrowed from the Brio, and the 100hp 1.5-litre Earth Dreams i-DTEC diesel engine like on the City and the Mobilio. Transmission options include a five-speed manual and a CVT gearbox for the petrol motor; the diesel unit is mated to a six-speed manual.

Overall, the WR-V will be more like a cross-hatch version of the standard Jazz and is expected to take on the Hyundai i20 Active, Fiat Avventura and the Toyota Etios Cross.