History of the Mercedes-Benz S-class

We take a look back at the history of the pioneering S-class luxury sedan. 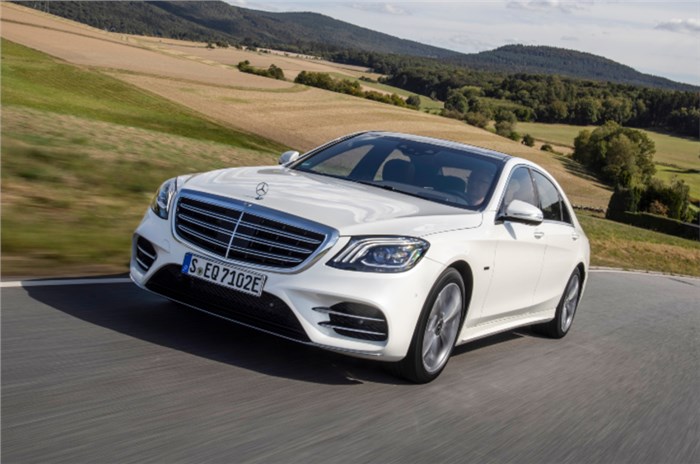 Mercedes-Benz has one aim when it comes to its range-topping S-class – to make the best car in the world, and that’s no mean feat. But as the automotive industry has witnessed time and again, with each new Mercedes S-class variant comes innovative technology never before seen on a car. The S-class has always been a game-changer. So where did it all begin? Our exhaustive list tells all. Do note, the classic S-class' will be part of the expansive display at the Mercedes-Benz Classic Car Rally 2019 to be held in Mumbai on November 10.

The Mercedes S-class DNA can be traced back to 1951, when at that year’s Frankfurt motor show, the German carmaker introduced the svelte W187 220 and W186 300 models. Available in sedan, coupé and cabriolet styles, the 220 was powered by a 2.2-litre, six-cylinder overhead cam unit producing 81hp. 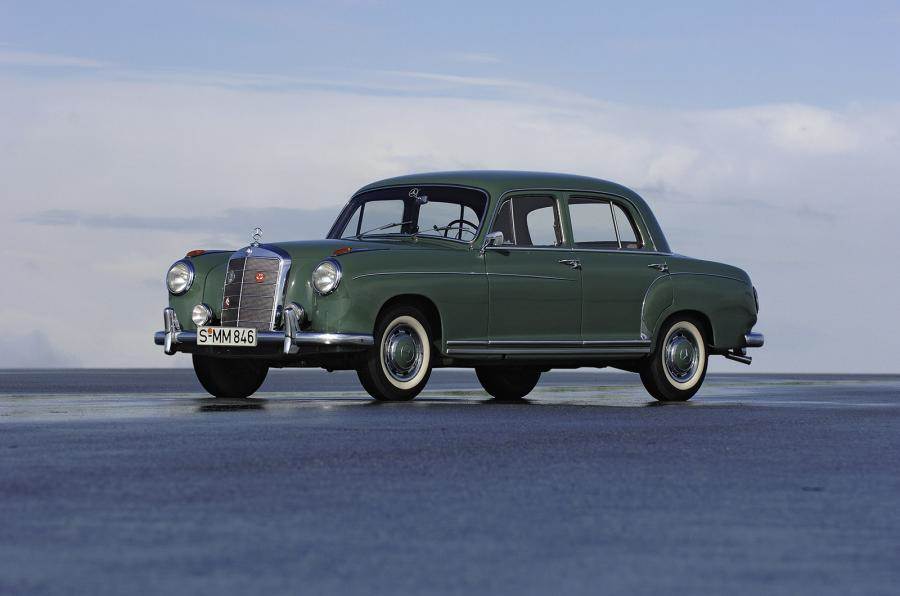 The original S-class, the 'Ponton' was the first monocoque Mercedes.

In its grander 300 guise, an 114hp, 3.0-litre, inline-six propelled the car onto a top speed of 161kph – cementing the 300 as the fastest German production car at that time. Technical highlights included a safety lock to prevent doors from bursting open and electronically operated torsion bar suspension to compensate the height of the rear wheels under heavy load.

In 1954, the W180 220 series made its debut. Nicknamed 'Ponton' for its markedly round, slab-sided design, the 220 showcased an innovative single-joint swing axle for improved safety and comfort, an automated clutch, manually controlled fuel injection and even separate heaters for driver and passenger. 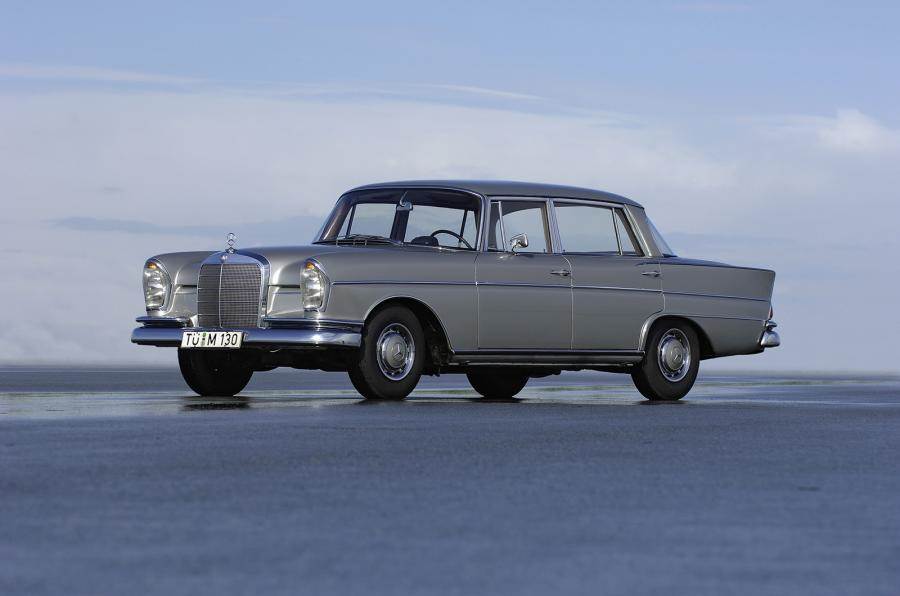 The Fintail featured crumple zones and locks which ensured the doors stayed closed in a crash.

Five years later, the ‘Fintail’ Mercedes-Benz W111/112 arrived in five versions, from 220b to the 300SE long-wheelbase form. The W111/112 took safety to a whole new level; boasting the world premiere of front and rear crumple zones, the first Mercedes-Benz car to feature disk brakes all round, while an injury-reducing interior brought to the forefront three-point seat belts, a padded steering wheel and wedge-pin door locks.

In 1963 Mercedes-Benz unveiled the colossal W100 600 limousine, available in short-wheelbase and long-wheelbase ‘Pullman’ versions. Embellishments such as air suspension, hydraulic appointments all-round and a 250hp 6.3-litre V8 shifting the hefty 2600kg body gave the 600 an air of supremacy, proving immensely popular with political figures and celebrities during its time. Production ceased in 1981 with 2677 examples built. 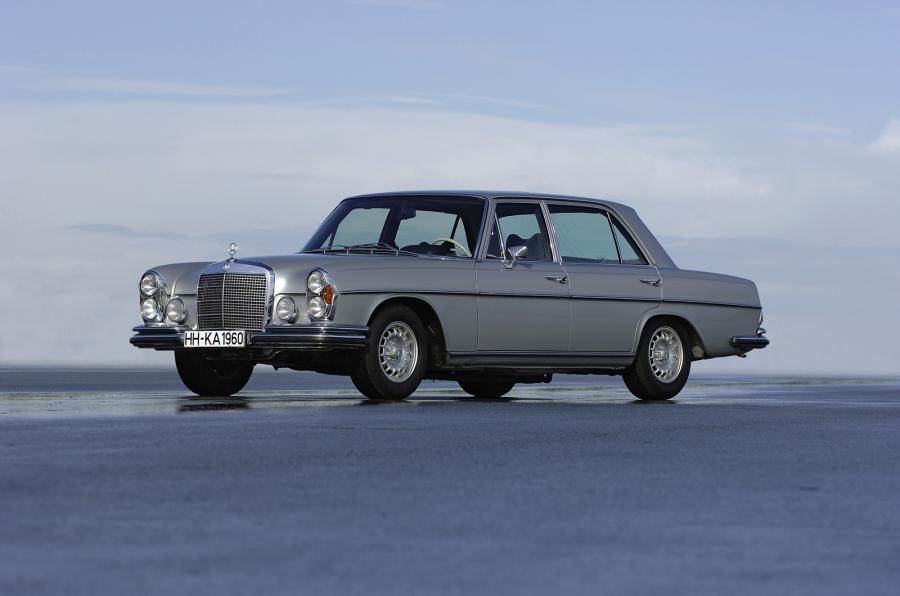 Two years after the debut of the 600, Mercedes-Benz launched the W108/109 saloons to replace the previous generation ‘fintail’ version. The W108 line, which included the 250S, 250SE, 280S, 280SE and 280SEL were larger than its fintail predecessor it replaced. The W109 was identical to the W108, but featured an extended wheelbase of 115mm and self-levelling air suspension. Its success as a “premium flagship” car convinced Daimler to add a long-wheelbase car to the model range and from that point on, all future S-class models would feature a long-wheelbase variant.

In 1966, company engineer Erich Waxenberger had a brainwave: extract the 250hp, 6.3-litre V8 unit from the 600 limousine and shoehorn the lump into the W109 body, thus creating the Mercedes-Benz 300SEL 6.3. The result was a nigh on two-tonne sedan with enough performance that left Porsche 911S owners on an autobahn looking flat-footed. The 0-100kph sprint dispatched in an eye-popping 5.7 sec and onto a top speed of 230kph. Even Mercedes-Benz’s tuning subsidiary (AMG) got in on the act, producing a fettled 6.8-litre V8 425hp version nicknamed the 'Rote Sau' or Red Pig, which went on to finish second at the Spa 24 Hours in 1971. 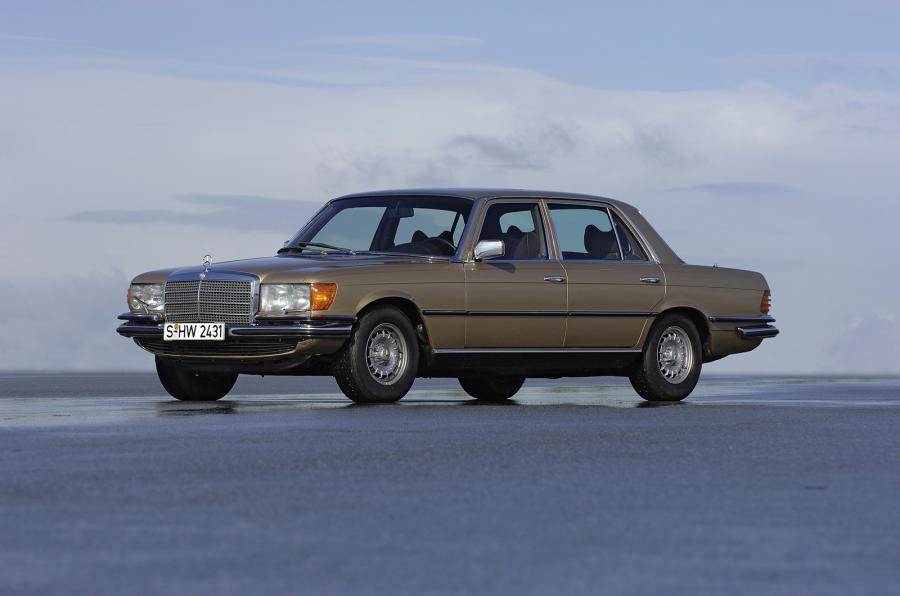 After years of subtly dropping the ‘S’ into its luxury flagship cars, in 1972 Mercedes-Benz eventually gave in and named their W116 variant the S-class. Stamping its authority as the halo model in the German carmaker’s line-up, the W116 S-class was the first production car to get ABS – it showcased the hugely advanced system in 1978. Other innovations included the first production sedan with a turbodiesel engine (the 300SD launched that same year), cruise control and a collision-proof fuel tank. 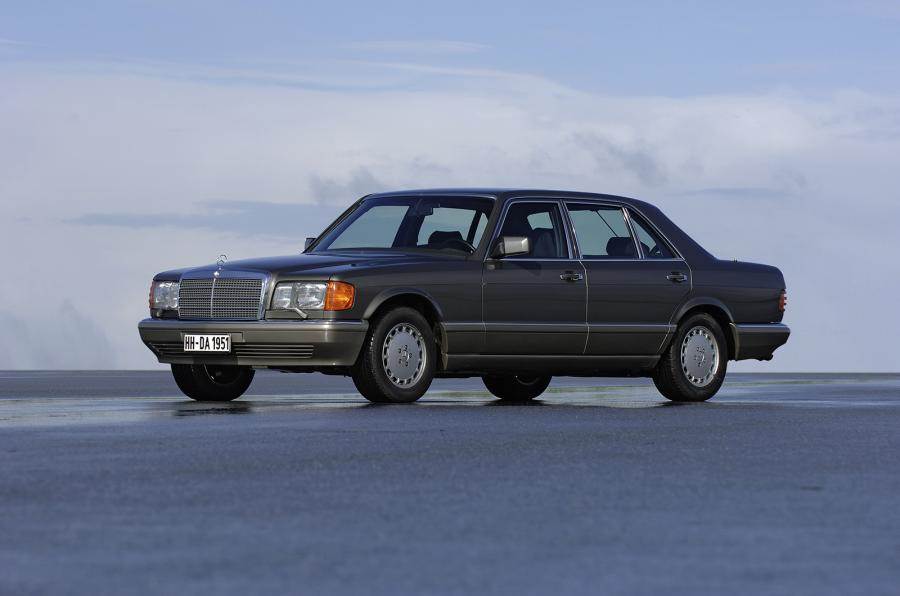 1979 saw the introduction of the W126 which was the first to offer seat belt pretensioners and a driver airbag.

In 1979, the W126 S-class was launched. Featuring improved aerodynamics and sleeker lines, the W126 continued the S-class technical trend, including revolutions such as the world debut of the driver’s side airbag in 1981 and front passenger airbag in 1985, passenger seatbelt tensioners, a bodyshell with a ‘forked’ longitudinal member to meet the offset of crash requirements and lighter all-alloy V8 engines. The W126 S-class’s production run of 12 years was longer than any S-class before or since, with over 8,90,000 models sold worldwide. 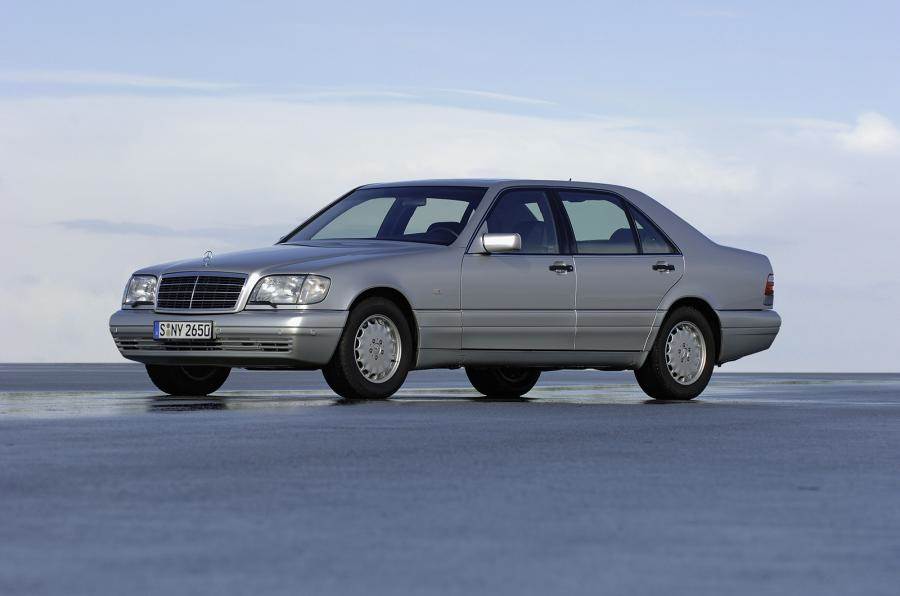 The W140 introduced the world to Linguatronic technology.

Mercedes-Benz unleashed the bulkier W140 S-class in 1991 in the form of two wheelbase versions and a W140 coupé. In addition to boasting such electronic wizardry as Electronic Stability Programme (ESP) – another world-first – adaptive damping, brake-assist and self-closing boot and doors, the W140 also featured double glazing on the side windows and was the first Mercedes-Benz passenger car to come with a production 12-cylinder engine. Back then, it was the brand’s most powerful passenger car – the 6.0-litre unit pumped out 413hp. 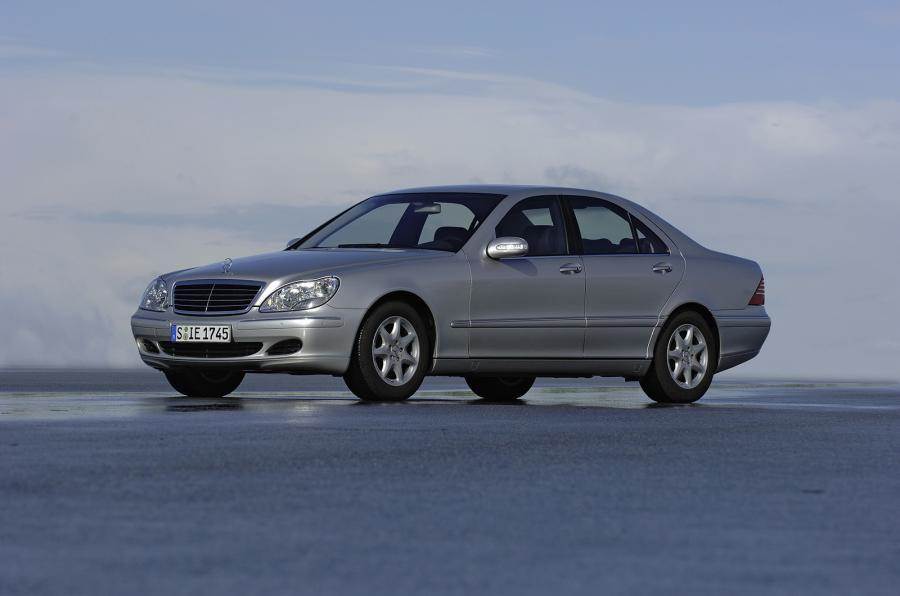 Fast-forward seven years and the W220 replaced the now-ageing W140 with a completely new design, resulting in a body that was slightly shorter and lighter than its predecessor. The W220 continued the S-class’s pursuit towards ever-improving safety with eight airbags, ‘Pre-safe’ occupant protection system and an automatic childseat recognition system. Automatic cylinder shut-off, ventilated seats and a ‘Keyless-Go’ access system also made their debut. Mercedes-Benz also launched the first official AMG-badged S-class in the form of the S55 AMG armed with a 500hp supercharged 5.4-litre V8. 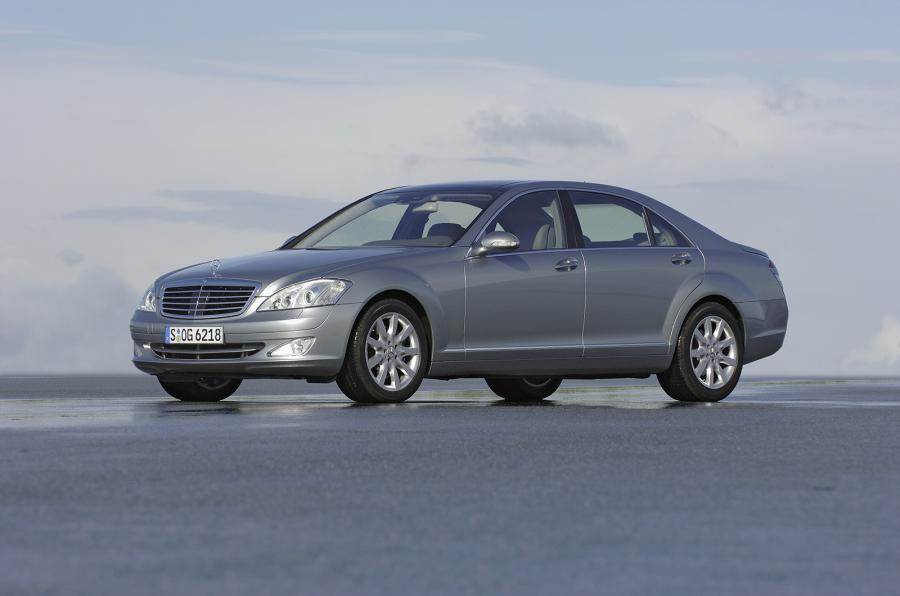 In 2005, the W221 S-class was unveiled at that year’s Frankfurt motor show, with evidence of a bulking diet – overall proportions being slightly larger than the preceding W220. Technological bragging rights included lots of ‘assisting’, with infrared night view assist, blind-spot assist, park assist, lane-keeping assist and a proximity control including an automatic braking system. 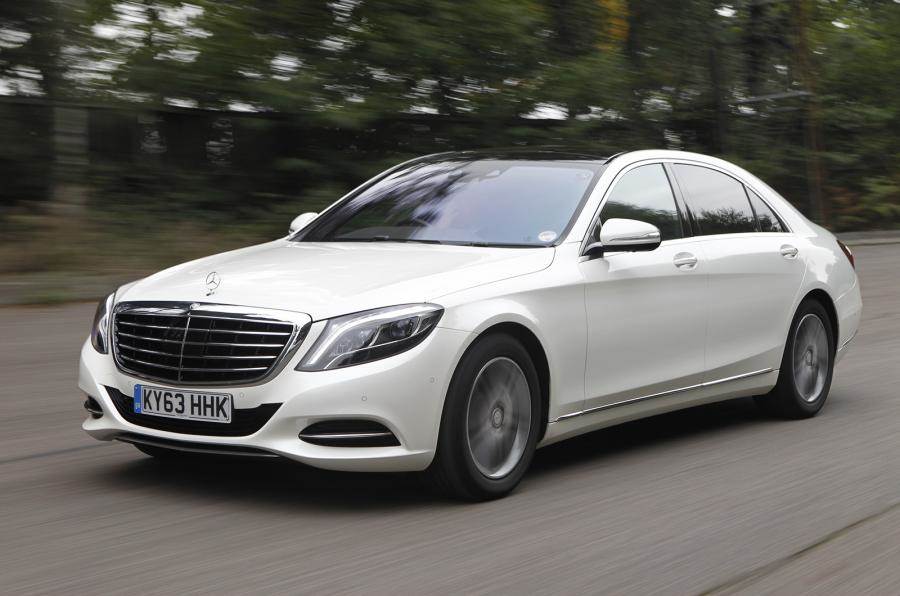 The latest generation, the W222 uses cameras to scan the road for optimum ride and body control.

With Mercedes-Benz’s new W222 model pioneering rear seatbelt airbags and tweaks to its Airmatic Active Body Control and Distronic Plus systems, can the S-class continue to be the technological tour de force not only in the luxury sedan car segment, but also in the automotive world? 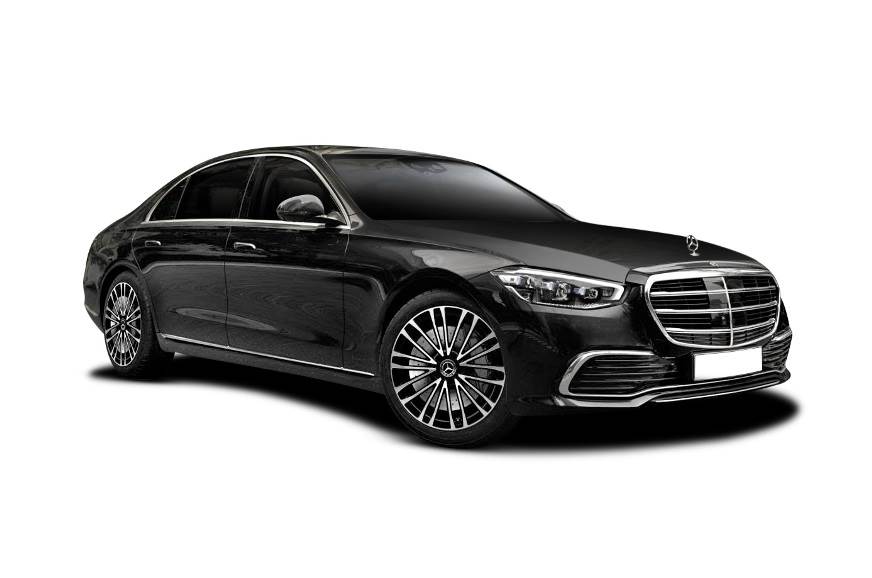 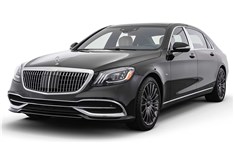 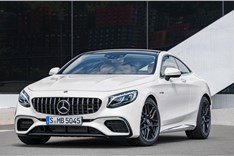