The aim is to have at least one EV charger every 3 sq km grid within cities; fast chargers at every 100km on highways. Any individual or entity is free to set-up public charging stations. 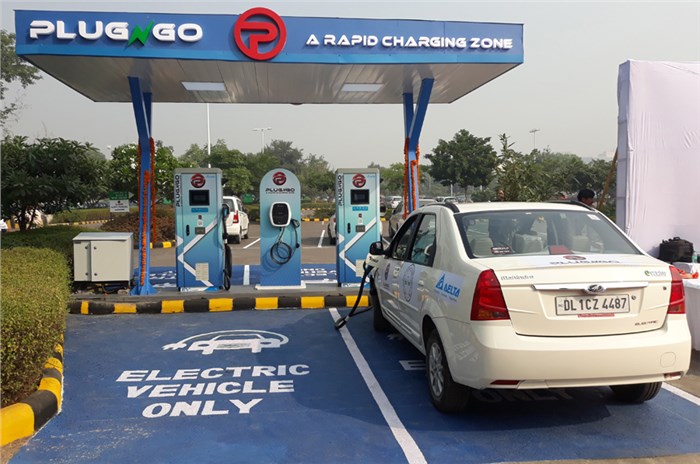 The government of India has started addressing the ecosystem of electric vehicles (EVs) and the country's infrastructure (or rather, the lack of it) to support them. To make further progress towards setting up charging infrastructure, Union Minister of State for Power and New and Renewable Energy (IC) and Skill Development & Entrepreneurship RK Singh has announced revised guidelines that the government says will address the concerns of EV owners.

The ministry says the revised guidelines and specifications for charging infrastructure shall supersede the earlier guidelines and standards issued by the Ministry of Power on December 14, 2018.

RK Singh said that the new guidelines are more consumer-friendly as they incorporate a number of suggestions received from various stakeholders. “We have tried to address the concerns of EV owners in new guidelines.”

The government aims to have at least one charging station to be available in every 3 sq km grid in cities; and one charging station every 25km on both sides of intra-city highways. All major cities (and expressways connected to these cities) are to be taken up for coverage in first phase; other big cities are to be taken up in second phase. For inter-city travel, fast-charging stations will be installed at every 100km and the Bureau of Energy Efficiency (BEE) has been nominated as the Central nodal agency to facilitate installation of charging infrastructure.

Furthermore, the ministry says assuming that most EV charging would take place at homes or at offices – where the decision of using fast or slow chargers would rest on the consumers – the guidelines clarify that private charging at residences/offices shall be permitted and distribution companies (DISCOMs) may facilitate the same.

The guidelines also specify the type of chargers of different standards (CCS, CHAdeMO, Type-2 AC, Bharat AC 001) which the Ministry of Power says will ensure that public charging station owners have the freedom to install the chargers as per the market requirement.

To keep this technology unbiased, it has been provided that any other fast/slow/moderate charger as per approved DST/BIS standards whenever notified can also be installed at the PCS. Thus, the guidelines provide an extensive flexibility while ensuring a democratic choice to both EV owners and public charging station providers to install the type and number of chargers.

The Bureau of Energy Efficiency has been nominated as the central nodal agency, and a provision for state nodal agency for the respective states has been provided for in the guidelines. The roles of the respective nodal agencies have been specified. These agencies will act as the key facilitators in installation of charging infrastructure for EVs throughout India.

The tariff to be charged – from public charging stations and domestic consumers for private chargers, alike – by the distribution companies have also been covered in the guidelines; as has the service charges to be charged by these PCS from EV users. It has been provided that the domestic charging shall be akin to domestic consumption of electricity and be charged as such. However, in case of PCS, it has been provided that tariff for the supply of electricity to PCS shall be determined by the appropriate commission in accordance with the Tariff policy issued under section 3 of Electricity Act 2003, as amended from time to time.