A 10 year blueprint will allow auto companies to plan their powertrain strategies and develop cost-effective tech to meet future regulations. 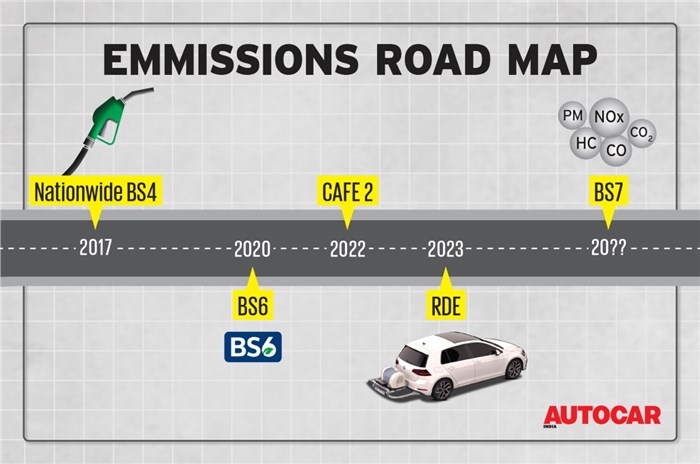 Often panned for its contribution to air pollution, the Indian auto industry has made great strides to clean up its act in recent years. Despite the tight April 2020 deadline, it successfully transitioned to BS6, and is now gearing up for the next round of emission norms set to kick in by 2022-23. However, the regulatory path beyond that remains unclear, which could potentially upset the automakers’ long term strategies for powertrain development.

Talking about the next steps in regulating emissions, Dr Pawan Goenka, former MD and CEO of Mahindra and Mahindra, said during a recent conclave on ‘‘Meeting Emission Challenges’ organised by our sister publication Autocar Professional, “Beyond BS6 is BS7, or Euro 7 which is being talked about in Europe and will obviously come to India too.” He added, “It is very important that we have a long term roadmap.”

“We'll have to admit that where India slipped in emission norms was the gap between BS3 and BS4, which was intended to be four years, but turned out to be seven years, and BS4 came in 2017. That's the reason that the task of BS6 became so hurried, complex and challenging,” continued Dr Goenka.

Echoing similar opinions and highlighting the systemic failure, Dr Ravi Damodaran, CTO of commercial engine manufacturer Greaves Cotton, said, “In India, OEMs are never prepared because norms are never notified with enough notice period; we only get 3-4 years.” “So policy changes should be done really upfront with at least 7-8 years of time for the players.” As such, the auto sector is seeking an emissions outlook for at least the next 5-10 years.

To begin with, the government could start deliberating the next logical step in the regulatory ladder – Bharat Stage 7. “We should look at the next step, that is BS7, and whether it is going to be a copy of Euro 7, or an adaptation,” mentioned Krishnan Sundararajan, MD, Renault Nissan Tech and Business Center India.

Highlighting the urgency of a stable policy structure, Gaurav Gupta, Chief Commercial Officer, MG Motor India, said, “There has to be a clarity on what we are looking for, so that all the OEMs can work backwards and prepare themselves accordingly. That is something we all are grappling with. Frankly, the time is running out, which is the number one challenge that we are facing as OEMs, and that needs to be called out loud and clear.”

Benefits of having a long term vision

The hurried implementation of emission norms can be disadvantageous to both, the industry and customer alike, as BS6 regulations exemplified. “We depend a lot on the technologies which are already mature in the West, but adopting them, as it is, has turned out to be disruptive for India. After BS6, there has been a significant increase in prices, so much so that we have had a volume reduction and some OEMs have even discontinued certain models. It has really impacted the industry as a whole, which we didn't see in earlier emission norm changes,” said Dr Damodaran of Greaves Cotton.

He continued, “That is primarily because, given the short time that we had, none of us were prepared with mature technologies appropriate for achieving those emissions in India, and we had to depend almost entirely on existing technologies from outside India for (exhaust) after-treatment or for engine management systems. And this is where we will face the challenge again during the next emission norms.”

Experts believe that the research, development and testing of technologies for any major change in emission rules takes at least 4-5 years. So if a roadmap till 2030 is laid out well in advance, automakers can begin working on indigenous solutions. “We don't want to use European solutions, as it is, because they come at European (read: high) costs. So, if we have time,  we can plan to develop smart solutions meeting our requirements,” explained Naresh Phansalkar, Director Global, CTOH (Commercial Truck and Off Highway) Engineering, Clean Air at auto components provider Tenneco.

“The frugal thinking capability of Indians and our innovations and ability to manufacture the product in a much more cost effective manner, should really help us to offer the (optimum) solution here,” said component supplier Wabco India’s MD, P Kaniappan.

While planning for the long term though, other considerations will also need to be factored in. “Please bear in mind the economy. You have to watch out for the economy. (Assess) what is realistically feasible and set the norms accordingly,” said R Velusamy, Mahindra’s Chief of Global Product Development.

Focus on multiple powertrain technologies could be problematic

Though an overwhelming majority of vehicles on Indian roads today are purely based on internal combustion (IC), the share of electrification is set to rise in the coming years. Commenting on the passenger vehicle (PV) segment in India, Sanjeev Saxena, President, Automotive, Schaeffler India, said, “By 2025, hybridisation, which is practically zero today, is going to move up to 5 percent (of the overall PV market), and up to about 30 percent till 2030.” Battery electric vehicles, which make up for a minute portion of the current car market (about 0.22 percent in FY2021), are expected to rise as well. “We believe that electrification will be about 3 percent by 2025, and about 10 percent by 2030.”

However, Saxena added, “India will be the last country which will see IC engines being used in the very long run.”

In addition to manufacturers looking at hybrids and EVs to meet emission targets, the government is also pushing for alternative solutions, such as flex-fuel engines and CNG. However, the mandate to adopt a variety of technologies could stress the automakers’ resources and spread them thin. “Except for gasoline and diesel, if you also focus on synthetic fuel, multi fuels, then it adds to the complexity of automobile development,” said Mahindra’s Velusamy.

Regulators, then, should largely remain technology agnostic and only set long-term emission targets. “Policy change shouldn't worry about which kind of technology we want to introduce, I think the free market should decide that, based on the policy,” chimed in Dr Damodaran.

To push carmakers towards more sustainable technologies, the government could also introduce taxation based on emission levels of the products. “I can see a benefit in CO2-based taxation systems. Current taxation, specifically the GST cess, is based on vehicle length and engine displacement. Depending on our contribution to clean environment, it could definitely be conducive to incentivise a system which benefits customers if they go for cleaner cars and less CO2 heavy vehicles,” said Martin Schwenk, MD and CEO of Mercedes-Benz India.

While the Indian auto industry may be all set for BS6 Phase 2 norms from 2022-23, it remains anxious about the future. The government, then, must introduce a well-rounded, long term policy, soon enough, to ensure sustainable growth of the sector.