Cars and SUVs with up to 8 seats weighing under 3.5 tonnes will be crash tested in India under the new Bharat NCAP program. 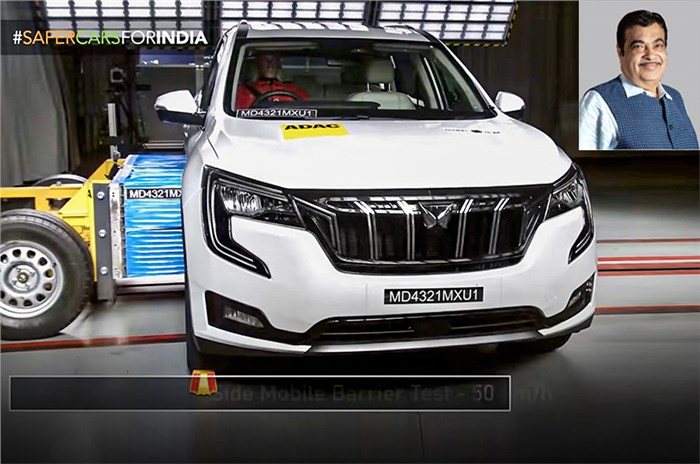 Union minister for Road Transport & Highways Nitin Gadkari has approved the draft notification to introduce Bharat NCAP (New Car Assessment Program). The program will be rolled out from April 1, 2023 and test passenger vehicles with up to eight seats weighing under 3.5 tonnes. Automobiles in India will be accorded star ratings based on their performance in crash tests factoring in the existing Indian regulations and driving conditions. The Bharat NCAP program was first announced back in 2016.

In a series of tweets, Gadkari said that Bharat NCAP will serve as a consumer-centric platform that allows customers to opt for safer cars based on their star ratings, while promoting a healthy competition among Indian manufacturers. "Star rating of Indian cars based on crash tests is extremely crucial not just for the safety of passengers, but also increase the export-worthiness of Indian automobiles," he noted.

Emphasising that the testing protocol of Bharat NCAP shall be aligned with global crash test protocols factoring in the existing Indian regulations, Gadkari said that it will allow Indian manufacturers to get their vehicles tested at our own in-house testing facilities. "Bharat NCAP will prove to be a critical instrument in making our automobile industry Aatmanirbhar (self sufficient), with the mission of making India the number 1 automobile hub in the world," he added.

This development goes in line with our previous story where Abhay Mannikar, advisor at the Automotive Research Association of India (ARAI), an autonomous body associated with the Union Ministry of Heavy Industries, had said that documents for Bharat NCAP are ready and the time is right for its introduction. This was conveyed to our sister publication Autocar Professional in a panel discussion.

Additionally, Bharat NCAP will not be limited to passive safety tests and testing internal combustion engined vehicles, but also test and rate CNG and electric vehicles based on their crash performance. Also, unlike other NCAP formats, which award separate star ratings for adult and child protection, BNCAP is likely to get a single unified rating for adult and child protection.

The development also assumes significance considering that India is looking to reduce the number of road accidents and deaths by 50 percent by the end-2030. India has one of the world’s worst accident records and data from the National Crime Records Bureau (NCRB) suggests that over 1,20,000 people died due to road-related accidents in 2020.