Our October 2020 issue features reviews, comparisons and more stories ranging from the India exclusive review of the Audi Q2, a showdown between the Sonet and Venue, and our MG Gloster road test to exploring Odisha in a Lamborghini Huracan and more. 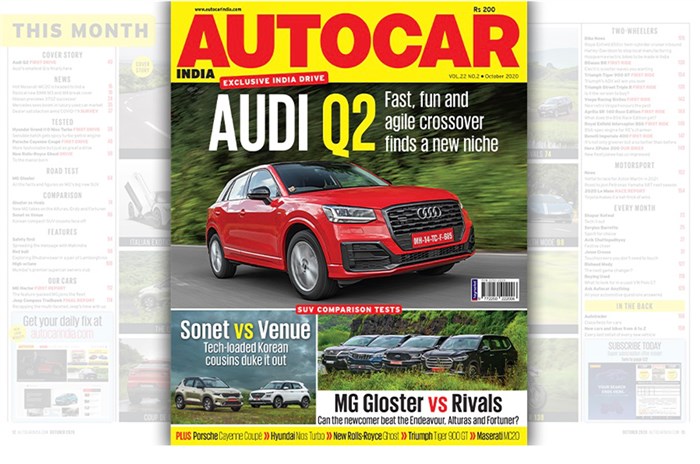 Click here to order the October 2020 issue from Amazon

Click here to order the October 2020 issue from Flipkart

The October 2020 issue of Autocar India is out now, and headlining our latest issue is an India exclusive drive of the Audi Q2, the brand’s smallest crossover that’s soon to launch. We also have two SUV showdowns. First, compact SUVs, as the Kia Sonet takes on the Hyundai Venue, and then, full-size SUVs, as the MG Gloster squares off against the Toyota Fortuner, Ford Endeavour and Mahindra Alturas G4.

We’ve also packed in reviews of the Hyundai Grand i10 Nios Turbo, Porsche Cayenne Coupé and new Rolls-Royce Ghost. To go with these, we’ve packed in first rides of the Triumph Tiger 900 GT and Street Triple R, BGauss B8 electric scooter and Aprilia SR 160 Race Edition. Plus, more juicy news from the industry and features you’ll enjoy reading. Here are the highlights:

Part SUV, part large hatchback, the Audi Q2 is pure crossover. But what exactly does it bring to the table, and what’s it like to drive on our roads? We bring you an exclusive first drive.

In the blue corner, we have the Kia Sonet; in the red corner, the Hyundai Venue. We play referee in the battle of the Korean compact SUVs.

Compared to the standard Cayenne we’ve all come to know so well, the Porsche Cayenne Coupe delivers some much-needed style, a bit more agility and a whole lot more Porsche.

Can MG’s new flagship disrupt the body-on-frame, seven-seat premium SUV space? We put the three-row MG Gloster through its paces and deliver our final verdict.

The best-selling model in the ultimate luxury brand’s history has been redesigned from the ground up for its second generation. We get behind the wheel of the new Rolls-Royce Ghost.

Looking for a big and tough SUV that has enough room for the entire family? We line up the MG Gloster alongside its rivals-in-chief – the Ford Endeavour, Toyota Fortuner and Mahindra Alturas G4 – to pick a winner.

Driving a Lamborghini Huracán in Odisha

In the ongoing search for supercars in uncanny places, we end up exploring the beautiful state of Odisha, led by one very special limited-edition Lamborghini Huracán.

We get astride the Triumph Tiger 900 GT and learn the new entry-level Tiger for India has a lot more to offer than its predecessor.

BGauss takes a shot at the Indian electric two-wheeler space. We head out for a spin on the BGauss B8 to see what this new e-scooter has to offer.