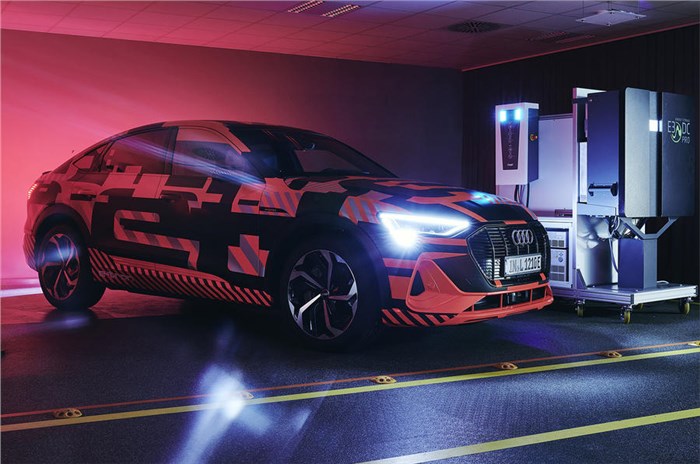 Audi has begun working on bi-directional charging technology, which would allow its EVs to act as an extension of the electricity grid.

How does the technology work?

The technology, developed by Audi and Hager Group and being trialled on the Audi e-tron electric SUV, allows electric cars to not only receive electricity from home stores via wall chargers but also give the stored energy back.

In Audi’s test grid, the e-tron operated with a DC wallbox with a charging capacity of up to 12kW, as well as a home storage unit with a capacity of 9kW. Because of the DC voltage level in the overall grid, Audi claims the connection between the home electricity system and the e-tron didn't require an inverter, making it very efficient.

Audi said this system would be particularly useful for customers who have solar panels, with the car being able to store home-generated electricity while the sun is shining and return it during times when it isn’t.

An Audi spokesperson said: “Bi-directional charging at home – also known as Vehicle to Home (V2H) – has great potential to reduce the home-owner’s electricity costs and increase network stability. As a further expansion stage, in combination with a home storage unit, it's possible to achieve near-complete energy independence and increased security of supply in the event of a blackout.”

Is this technology new?

Audi isn't the first company to investigate this technology. In 2017, Nissan trialled a similar scheme in Denmark, allowing its EV fleet customers to buy a vehicle-to-grid charger to both, draw energy from the grid to power their car and ‘sell’ it back when their car was not in use. It later expanded this scheme to the UK.

The Japanese firm continues to pursue the technology and aims for it to become a production reality in the near future.

Similarly, Renault adapted a fleet of Zoes for vehicle-to-grid charging in 2019, introducing 15 across Europe. Unlike Nissan’s earlier system, which necessitated the installation of an energy storage unit in EV owners’ homes, these Zoes have energy storage units installed on-board.

Could there be any drawbacks to the system?

Some experts have expressed concern about the viability of such systems. A 2018 study by the University of Hawaii found that vehicle-to-grid charging accelerated the degeneration of an EV's battery.

Could it be offered in India?

The technology is currently under development and testing and could still be years away from entering production. However, the model being used for testing the system, the Audi e-tron SUV, was showcased in India last year and is expected to launch here sometime in 2021.