The fastest Mercedes-AMG around the Nürburgring has made its India debut, 2 years after its global unveiling. 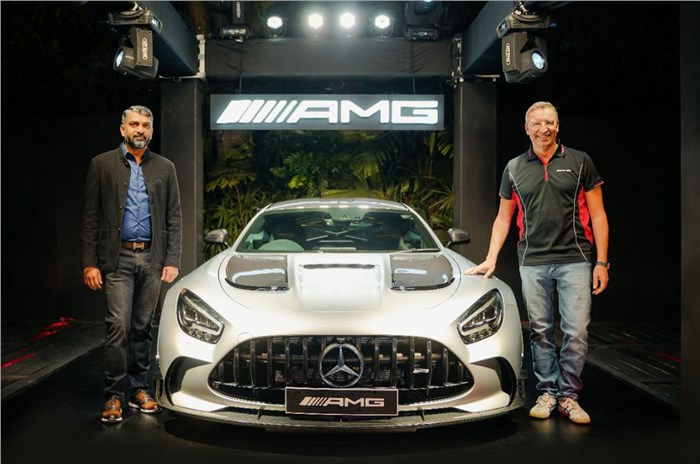 Mercedes-Benz has launched its highly exclusive AMG GT Black Series at a starting price of Rs 5.5 crores (ex-showroom, India, before individual customer configurations). The German marque announced that it’s getting only two units of the supercar to India via the CBU route, and both are already sold out. The first unit has already been delivered in Karnataka, while the second unit will be delivered next month.

Most powerful V8-powered Mercedes yet

Unlike previous AMG models, this track-focused supercar is powered by a flat-plane crankshaft V8 engine that grants smooth yet enhanced performance at low RPMs. In all, the engine now produces 730hp and 800Nm of torque via a modified AMG-spec 7-speed DCT transmission. With a 0-100kph time of just 3.2sec, a 0-200kph time of 9sec, and an overall claimed top speed of 325kph, the GT Black Series holds the distinction of being the most powerful V8-powered Mercedes.

Gets equipment for the track

In order to extract the best lap times on circuits, the supercar gets a new, larger front grille, along with a carbon-fibre diffuser for added aerodynamics and a manually-adjustable splitter. Keeping things lightweight is the inclusion of a new carbon-fibre bonnet that houses two large air vents that aid in enhancing downforce and cooling. The GT Black Series also sports new carbon-fibre front wings with integrated body-coloured louvres and a carbon roof.

AMG has also equipped the supercar with 10-spoke, forged alloy wheels – 19 inches at the front and 20 inches at the rear. Along with adjustable adaptive dampers, the GT Black Series also gets manually-adjustable camber and roll bars on both axles, along with an uprated braking system. The interior of the supercar gets orange contrast-stitching, matt black carbon-fibre trim, lightweight carbon-fibre bucket seats, and an AMG steering wheel with ‘Black Series’ lettering. Lastly, the supercar also gets AMG-spec traction control that allows drivers to better manage its performance on and off the track.

When it comes to track-based supercars, the GT Black Series competes against the likes of the Lamborghini Huracan STO and the Porsche 911 GT2 RS in India. Recently, the German brand also unveiled its much-awaited Mercedes-AMG One supercar in production-ready guise.

We have driven the Mercedes-AMG GTR in India. Read or review here or watch our video here.