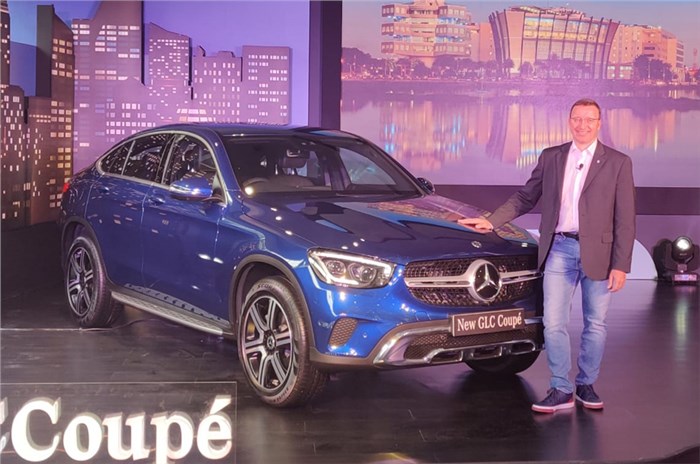 2.0-litre petrol and diesel engine options on offer; addition of MBUX infotainment system one of the highlights of the refreshed Mercedes-Benz GLC Coupe.

Mercedes-Benz has started 2020 with a bang. Having introduced the ballistic 639hp AMG GT 63 S 4-door Coupe and V-Class Marco Polo camper van at Auto Expo 2020 in February, the carmaker has now launched the GLC Coupe facelift in India.

While the pre-facelift GLC Coupe has been on sale here for a few years now, so far, it has only been available in the hot AMG 43 guise. The big talking point with the GLC Coupe facelift – which is now locally assembled – is that it’s also available in standard, non-AMG form, with the GLC Coupe 300 petrol priced at Rs 62.70 lakh and the GLC 300d diesel priced at Rs 63.70 lakh (all prices, ex-showroom). At this price, the Mercedes-Benz GLC Coupe facelift is priced on par with the BMW X4, its rival-in-chief.

Key differentiators for the updated GLC Coupe on the outside include a new diamond-pattern grille, redesigned front and rear bumpers, new LED head- and tail-lights and different alloy wheel designs. Just like with the standard GLC facelift, the addition of Mercedes’ slick new MBUX infotainment system is the highlight inside. There’s a 12.3-inch digital instrument cluster and also a 10.25-inch touchscreen infotainment screen, which features the ‘Hey Mercedes’ voice command tech.

Would you pick the facelifted GLC Coupe over its rivals? Let us know in the comments.