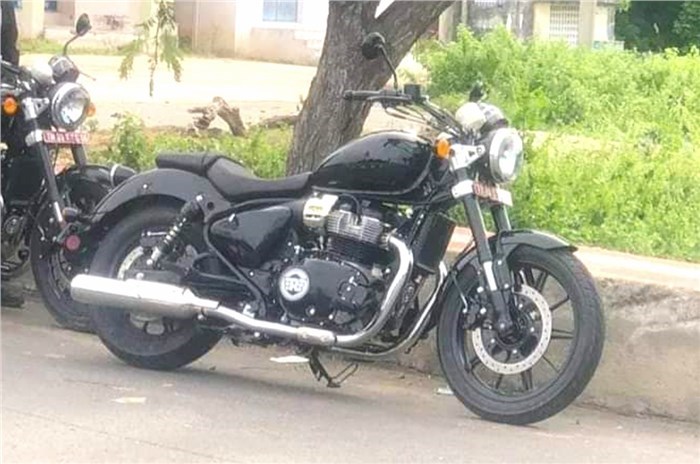 Numerous spy shots have revealed that Royal Enfield has an entire line-up of motorcycles in the works. One of these upcoming bikes is a mid-capacity 650cc cruiser that's expected to shake up the segment. Here are five things to know about it.

Royal Enfield has definitely taken inspiration from the Concept KX shown at EICMA 2018. However, unlike the KX with its slim fuel tank, this bike’s bigger teardrop-shaped tank is reminiscent of some Harley-Davidsons, while the large rear fender resembles the Indian Scout. Royal Enfield also appears to be going for a blacked-out theme with components like the fork legs, rear shock absorbers, levers, mirrors and more are finished in black.

The blacked-out theme is carried forward on to the engine as well. While the bike does indeed appear to be using Royal Enfield’s 648cc parallel-twin engine, the casings are finished in black as opposed to polished aluminium. Even if the bike is running a different tune, one can expect power and torque to be similar to the 47hp/52Nm that the 650cc twins make.

Royal Enfield is using a completely different frame for this bike. The metal tubing along the side is completely different and the twin rear shocks are mounted at an angle compared to the Interceptor 650 and Continental GT 650. The bike is also equipped with a USD and not a conventional fork. The bike also appears to be long and low, and, while we can’t be sure, it looks like the front wheel is bigger than the rear – a trick commonly used by big cruisers to create a strong stance.

The upcoming 650cc cruiser also has a feet-forward position, which should help move the feet away from the hot engine cases. Its rear tyre is also fatter than the 130-section unit on the 650 twins. Spy images also give us a glimpse of the instrument gauges and it looks like this bike gets a large circular dial flanked by a smaller one on the right. We believe the latter could feature Royal Enfield’s Tripper navigation system.

The other 650cc cruiser

Royal Enfield is also working on another 650cc cruiser. While the aforementioned bike has a feet-forward riding position, the other bike a more conventional riding position, set straight downward rather than forward. From the looks of it, this motorcycle also doesn't have as long and low a stance as the one mentioned here, leading us to believe that this could be another model, or a different variant under the same cruiser platform.

Royal Enfield to launch most models yet in FY2022