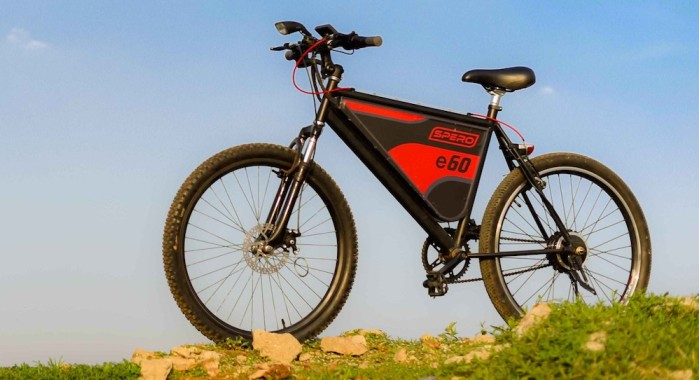 Coimbatore-based Milltex Engineers, which deals in textile machinery spares and renovation kits, had launched the Spero E-cycle a few months ago on crowdfunding platform, FuelADream.com. After the initial campaign managed to raise Rs 38 lakh with over 100 bookings in India, the company has launched the second campaign of the Spero. The electric cycle, which can be run with electric throttle apart from the manual pedalling, has been developed by S Manikandan, Supriya Paul and Mothilal after a careful study of the electric industry’s evolution.

The Spero comes in three models – E30, E60 and E100, each having a range of 30km, 60km and 100km respectively on a single charge. Powered by a 48V lithium-ion battery, the bike runs on a 250W motor, which allows it to fall under the government’s unlicensed/unregistered vehicles category. The company offers a one-year warranty on the battery, which can be charged from 20 percent to 80 percent in 4-6 hours and weighs between 2.7kg to 3.7kg (depending on the model). The battery, which is housed in the centre portion of the bicycle frame, is detachable to ease charging from a regular 5-amp socket.

S Manikandan, MD of Milltex Engineers, commented, “The response has been remarkable from our first campaign. Lots of people came up to contribute even Rs 100 as a token amount, because they were so excited about the idea. The best feedback came from an old farmer who called me and said his son gifted it to him. The experience I gained through years in the factory has given us the knowledge and expertise with handling machinery and sourcing materials that work best with this e-bike. We’re delighted to have built a high-quality e-bike, which is finding such acceptance through the crowdfunding model. The second round of crowdfunding will benefit those funders who will gain confidence from the success of the first.”

The Spero offers several path-breaking features such as cruise control, password protection and pedal assist and regeneration. The cycle’s tyres are imported from Korea and it offers several optional accessories such as headlights and carriers. Further, front shock absorbers and disc brakes come as standard. The pre-order prices for the three models on FuelADream range from Rs 29,900 to 50,900. Ranganath, founder of FuelADream said, “The e-bike campaign set new benchmarks in the crowdfunding space in India as there were doubts that a product that costs between Rs 30,000 to 48,000 would get funded so successfully. This campaign has been a trendsetter and will generate more innovation from inventors in India as they embrace the concept of crowdfunding.”

The company plans to set up support centres in eight cities across the country by March 2017.