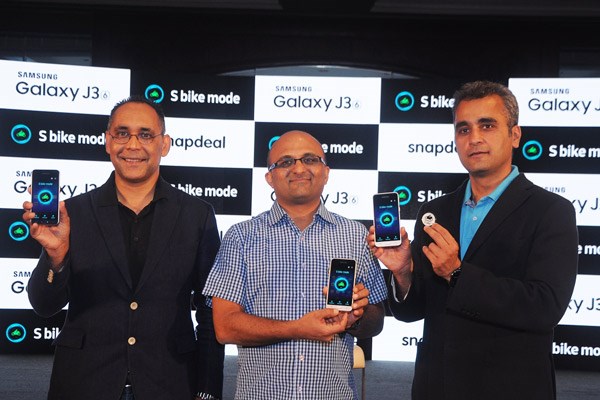 Samsung has launched the Galaxy J3 smartphone today with the 'S bike' mode targeted specifically for bikers in India and comes at a price of Rs 8,990. The feature is enabled with an NFC tag that can be affixed on the instrument cluster, helmet or the fuel tank. The rider has to tap the device on the tag to activate or deactivate the S bike mode. Alternatively, the rider can use the quick panel on the phone to activate or deactivate the feature.

Once the mode has been activated, all callers are diverted to an answering machine that informs them that the rider is riding and cannot take calls. If the call is urgent, the caller is prompted to press '1', where the rider will be notified of the incoming call. To make riding safer, the motion lock feature will allow a call to be taken only after the rider has stopped riding.

The S bike mode sports an intuitive user interface for riders to view call logs and also has a smart reply feature where selected contacts will receive an auto-SMS with an estimate of when the rider is likely to be available for a call on the basis of the trip and destination entered. The S bike mode also displays a dashboard of relevant data like time and distance travelled.

The Galaxy J3 is equipped with a 1.5 GHz quad-core processor and a 1.5GB RAM and comes with an 8mp rear camera and a 5mp front camera. The smartphone will be marketed exclusively through Snapdeal.

Asim Warsi, senior VP- Samsung India Electronics said that the S bike mode feature will be extended across all 4G-enabled Galaxy J series devices shortly. He added, “While studying consumers' phone-usage behaviour, we realised that incoming calls are a major distraction to bikers. Now, we have something that will benefit millions of two-wheeler users and promote responsible riding.” The company claims the S bike mode feature is an industry first. It was developed at the company’s R&D centre in India. It can also be applied for use in a four-wheeler.