We do a quick specification comparison between the newly launched Royal Enfield Himalayan and the Mahindra Mojo. 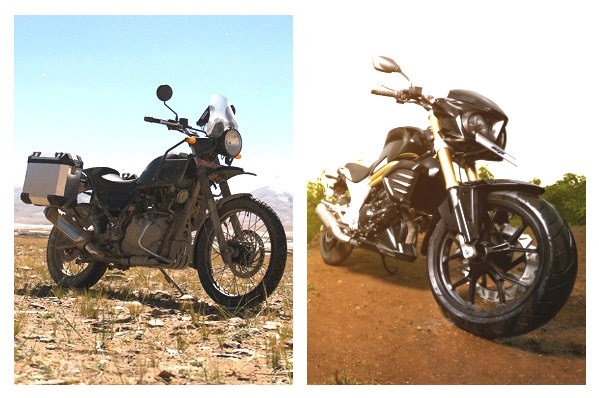 The launch of the Royal Enfield Himalayan has created quite the stir amongst motorcycling enthusiasts in India. It seems there was a latent need for a mid(ish) capacity touring motorcycle with the ability to tackle a variety of terrain and the Chennai-based bike maker has catered to this rather well. But let’s not forget that just last year, another manufacturer had also launched a motorcycle that seems quite well-suited to touring duties. Granted that the Mahindra Mojo started off as a performance-oriented bike early in its planning phase, there’s no denying that the end result has great highway legs and in fact seems more at home there as opposed to carving corners on a twisty mountain road or a race track. So how do these bikes stack up, at least on paper? Take a quick look…

At 411cc, the Himalayan’s single-cylinder carburetted motor might have the capacity advantage, but it’s the Mojo’s higher revving fuel-injected 295cc single-cylinder engine that makes more power with 26.8bhp on tap as compared to the RE’s 24.5bhp. The Mojo can also rev higher because it comes equipped with liquid cooling whereas the Himalayan’s engine is air-cooled (though it also features an oil-cooler). However the long stroke configuration of Himalayan’s motor means that it makes more torque – 3.26kgm versus the Mahindra’s 3.06kgm. The Himalayan gets a five-speed gearbox while the Mojo gets an extra cog in the transmission department.

It really is miraculous how Royal Enfield has managed to package such a fairly low-saddle height of 800mm while also keeping a massive 220mm ground clearance. This was clearly done with the bike’s operating conditions (of broken or missing roads) in mind. The tarmac-focussed Mojo has a slightly taller seat height of 814mm, while its ground clearance of 173.5mm is decent for a road-only machine. Both these bikes though, sport an identical wheelbase figure of 1,465mm. When it comes to weight though, the Mojo has a distinct advantage tipping the scales at just 165kg(dry), while the Himalayan weighs in at a heavier 182kg(wet).

Even though the Himalayan is pegged as a touring motorcycle, its fuel tank capacity of 15 litres is pretty much par-for-the-course. Of course, Royal Enfield does offer you the option of supplementing this capacity with additional jerry cans that mount beside the main fuel tank. The Mojo comes with a much larger fuel tank of 21 litres. Even if there is a difference in the real world fuel efficiencies of these two bikes, it would be safe to say that the Mojo will be able to travel farther on a single tank of petrol just based on the difference in tank capacities.

The Mojo is equipped with beefy upside-down forks at the front while it gets a gas-charged monoshock at the back. The Himalayan also gets beefy 41mm forks, but they’re regular telescopic units and at the back – with a complete departure from Royal Enfield’s conventional twin rear shocks – the Himalayan features a linked monoshock. The biggest differences between the Himalayan and the Mojo here are in the amount of travel the suspension units afford the bikes. The front and rear travel on the Mojo is 143mm, which ensures that it behaves best on tarmac. The Himalayan’s suspension on the other hand has 200mm of front travel and 180mm of rear travel, engineered so that the bike can handle the rough stuff as well as the smooth.

Keeping in tune with its go-anywhere philosophy, the Himalayan features wire-spoke 21-inch front and 17-inch rear wheels. Even the choice of rubber is more off-road oriented with the RE sporting Ceat Gripp XL knobby tyres at both ends. That being said, these 90/90-21 and 120/90-17 tyres offer good on-road grip as well. The Mojo on the other hand is a tarmac junkie, sporting 17-inch alloy wheels and super grippy Pirelli Diablo Rosso II tubeless radials – 110/70ZR17 at the front and 150/60ZR17 at the rear.

With an ex-showroom Mumbai price-tag of Rs 1.55 lakh, the Royal Enfield Himalayan is about Rs 10,000 cheaper than the Mahindra Mojo, which is priced at Rs 1.65 lakh ex-showroom Mumbai. Both bikes make for excellent touring machines, but at the end, they not just offer dramatically divergent characters, but differ in their aptitudes to tackle different terrain types as well.