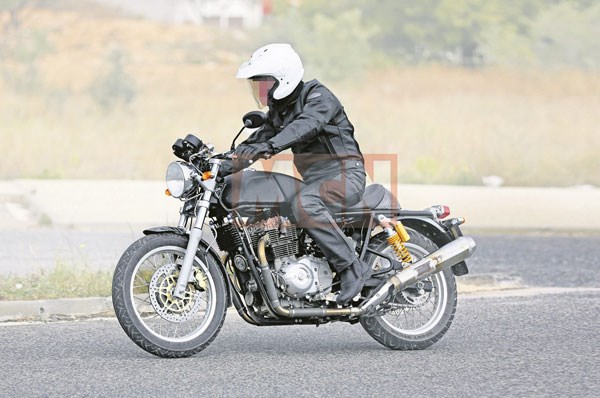 The bike will feature RE’s first twin-cylinder engine in 46 years; is likely to be fuel-injected to meet BS-IV and Euro-IV norms.

The Royal Enfield Continental GT 750 may be imminently close to production (and market introduction). We reported the spying of test mules of this motorcycle in the United Kingdom back in July 2016, but now, according to British motorcycle magazine MCN, a final-looking version of the same has been seen making test rounds.

The Continental GT 750 is powered by a 750cc air-cooled, parallel-twin with a two-into-two exhaust. It maintains the café-racer style of the Continental GT series, modified suitably to accommodate the larger engine. While the original test mule seemed to be fitted with carburettors, the latest one is likely to be fuel-injected, considering that the final bike – when launched in India and the UK – will have to comply with the more stringent BS-IV and Euro-IV norms, respectively.

The spy pictures reveal a few other changes as compared to the current 535cc Continental GT, such as the more traditional stalk-mounted mirrors and a longer wheelbase.

When this engine (and motorcycle) makes it into production, it will mark Royal Enfield’s departure from 46 years of making only single-cylinder engines, as well as its re-entry into the middleweight motorcycle segment. When launched, probably this year, the Continental GT 750 will go head-to-head with the Harley-Davidson Street 750, though it is likely to be priced more aggressively.