Kawasaki displays its Z800 at its Pune dealership, expected to launch soon. 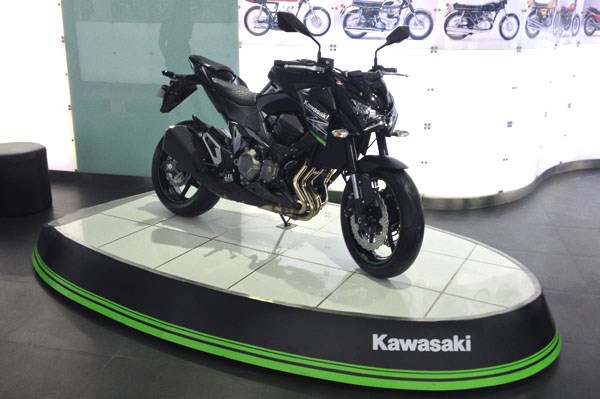 India Kawasaki Motors have lately been busy behind the scenes, launching an array of its motorcycles in the Indian two-wheeler market. This Japanese giant recently launched its litre-class Ninja ZX-10R and flagship Ninja ZX-14R for the Indian market. Kawasaki’s Z1000 naked sportsbike is slated for a December 2013 launch, and now we have information of its smaller capacity stablemate, the Z800 following soon as well. The Kawasaki Z800 houses an inline-four cylinder, four-stroke and liquid-cooled engine which displaces 806cc,generating maximum power of 113bhp at 10200rpm and peak torque of 8.46kgm at 8000rpm. This fuel-injected engine is allied to a 6-speed gearbox which transfers power to the rear wheel via an exposed chain. This tubular backbone frame uses 41mm inverted fork suspension upfront while a gas-charged monoshock does duty at the rear. Kawasaki have lent this motorcycle with 310mm petal discs upfront and a 250mm petal unit at the rear.

With Kawasaki officials remaining tight lipped regarding this bike’s launch, the Z800 is either expected to launch alongside its larger capacity sibling, the Z1000 this December, or to follow closely after, early in 2014.