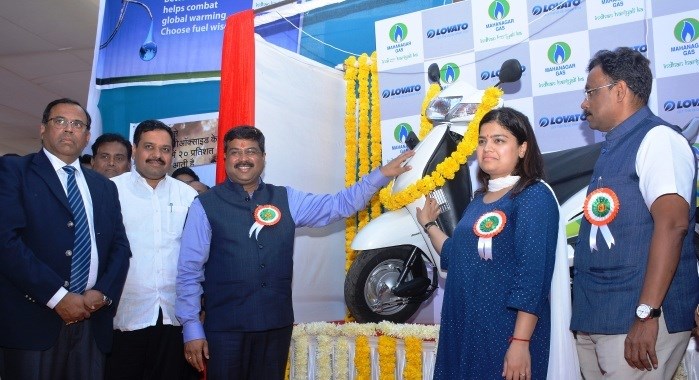 Launched for Mumbai Metropolitan Region, the eco-friendly scooters give an estimated range of 120–130km per filling.

Mahanagar Gas Ltd (MGL) in association with Eco Fuel (the Indian partner of Lovato, Italy) ushered in a green new year by launching CNG-fuelled two-wheelers. The green two-wheelers were launched by the Union minister of state (Independent Charge) for Petroleum and Natural Gas, Dharmendra Pradhan, in Mumbai, along with Vinod Tawde, Minister for Education, Youth, Sports & Cultural Affairs and Guardian Minister of Mumbai Suburban, government of Maharashtra. Dharmendra Pradhan also launched an e-wallet payment facility which can be used at the time of filling CNG.

The two-wheeler CNG kit comprises two CNG cylinders of 1.2kg each. A CNG-fuelled two-wheeler is estimated to clock up to 120–130km per kg at an approximate cost of Rs 0.60 per kilometre for a single fill and is substantially economical as compared to a similar petrol-run vehicle at current prices. In the initial phase, the scooters are to be retrofitted with a CNG kit manufactured by Lovato.

At present, two kit manufacturers – ITUK and Lovato – have received approval from ARAI, Pune and ICAT Gurgaon respectively for their CNG kits. Lovato has received approval for CNG kit fitment on 18 scooter models from various manufacturers. It is understood that, considering the huge potential of this segment, other CNG kit makers are also planning to enter this market.

The initial programme for CNG-fuelled two-wheelers was launched in June 2016 by Dharmendra Pradhan and Prakash Javadekar, then Environment Minister, and involved 50 CNG retrofitted two-wheelers. It was implemented by Indraprastha Gas Limited (IGL) and one of its parent companies, GAIL (India),