The fourth edition of IBW will be held at Vagator, Goa on February 19 and 20. The event line-up includes some new additions and some old favourites. 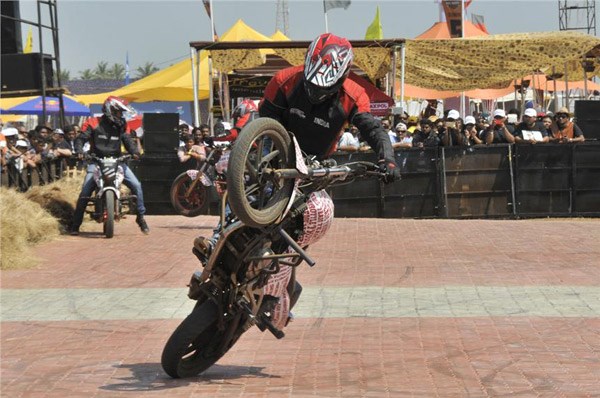 The India Bike week 2016 will be held at the following address.

Festival design agency Seventy Event Media Group (70 EMG), alongside travel and lifestyle channel Fox life, have announced the highlight events to be held at the fourth edition of India Bike Week (IBW). To be held on February 19 and 20, 2016, the event is set to play host to over 12,000 riding enthusiasts, from members of riding clubs to solo riders. This year, there will be the introduction of new events in addition to the ones that are now considered tradition such as, the Finals of the National Custom Bike Build-Off 2016, International Bike Expo and Vintage and Classic Bike Concours.

The IBW 2016, for the first time, will host Hard Enduro. A segment that will test man and machine to the limit over obstacle courses. The winner of the event will take home a trophy and a cash prize of Rs 75,000. The event will be open for general participation by amateur Moto Cross teams.

IBW 2016 will also feature a Moto Trials Show. The event will  mark the IBW debut of former multi-time World Trial Bike Champion, Dougie Lampkin, who will display his skills at the event.

Another introduction is the IBW Main Street. Located at the heart of the festival, the Main Street will act as a runway for riders to show off and parade their rides in groups or solo runs. The street will also be lined with bars and tents with DJ booths suspended overhead. The organisers have described the IBW Main Street as “India’s Rio Carnival for bikers”.

The IBW 2016 will also be hosting its first-ever film festival. Travel films from around the world focussing on riders, their bikes and their journeys will be screened at the festival. Movies showcased will be classified  under three categories – Heels on Wheels (films highlighting a unique take on women riders), Milestories (travel and adventure films beyond biking experiences) and Two-wheeler Talkies (films based on the passion of motorcycles and a love for the roads). Winners will receive cash prizes. For the everyday adventure movie maker, a separate segment will be introduced where participants can send in short ride videos . The categories include Ride with my Pride (films on biking clubs and their rides) and My Ride Video (short videos highlighting great solo rides). Entries will be featured on the IBW website and winners will be awarded GoPro cameras. The judging panel for the event will consist of Gaurav Jani, Imtiaz Ali and Arif Ali.

There will also a collection of motorcycle-inspired art on display at the Moto Art Collective, featuring customised riding gear by designer and biker Arjun Khanna, air-brushed helmets, live pinstriping, 2015 projects from India’s most creative bike builders, and moto-photography by Vikram Bawa and Ronnie Sequeira.

The sponsors of IBW 2016, Shell and CEAT, will be bringing famous riding celebrities to this year's event. Shell has roped in acclaimed Indian rider CS Santosh, who will host safety riding sessions for riders. He will also screen videos of some of his most exciting rides as well as provide a narrative on some of his best experiences. Shell will bring Ducati World Superbike rider Chaz Davies to the event.

IBW 2016 will also feature many artists who will perform live at various locations over two days.

Designed to motivate riders to get on their bikes and ride to the festival,  ‘Migration to Goa’ this year has been organised to allow interested riders to participate in groups with over 100 biker groups from across the country. They will be joined by IBW marshals who will act as pack leaders to guide the groups in their ride to Goa.

Returning events this year will be the next iteration of the National Custom Biker Build-Off with the finalists currently in the process of building their bikes for the last leg of the event. Also returning will be the National Stunt Championship, Bikini Bike Wash, the International Bike Expo, which will showcase some of the most advanced bikes in the world, and the Vintage & Classic Bike Concours – a showcase of over 100 vintage and heritage motorcycles.

As a prelude to the event, IBW will be hosting its customary Chai Pakoda Breakfast Runs across the country with the remaining runs being as follows :

The Nagpur-Wardha-Amravati, Kochi and Pune-Ahmednagar-Aurangabad editions were held on December 20 and 27, 2015 and January 10, 2016 respectively.