Paul Carberry speaks to us about the competition, sales numbers, ABS and his plans on selling the V-Twin as a crate engine. 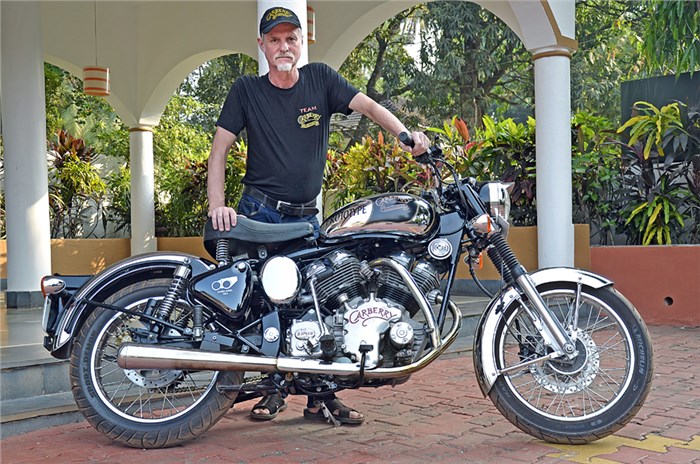 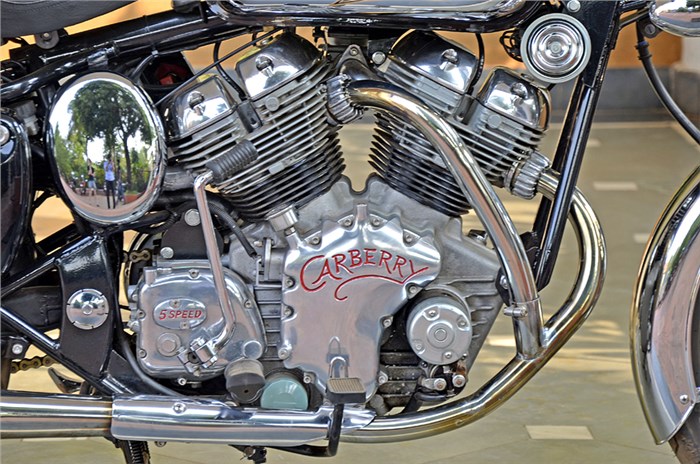 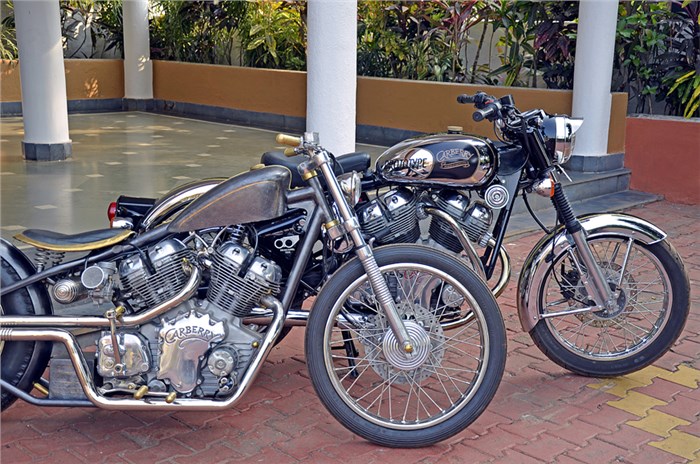 The Rag & Bones custom bike with the Carberry prototype. 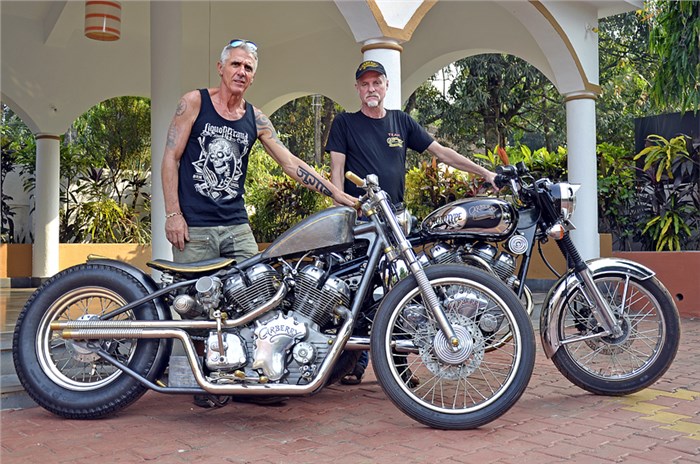 We speak to Paul Carberry on why he builds bikes, on co-existing with Royal Enfield, and on sales expectations and aftersales support.

What made you decide to build a V-Twin Royal Enfield?
At some stage I wanted to build what according to me was the world’s most beautiful motorcycle. I always wanted to build a British V-Twin; all I had to do was build a bottom-end. But, the British motorcycle industry shut down, and it was only Royal Enfield which remained that was truly British; also, they were pre-unit construction, which made them easy to put together. The other answer is, I had to do something with my life and may as well make it interesting in something that I’m qualified to do, to some degree.

Do you have plans for different frame styles for your motorcycles?
That’s a long way off. We’ve got a lot on our plate right now. It’s certainly part of the ongoing dream to keep building something new, and that’s what keeps it alive. But, we can’t bite off more than we can chew; we want to digest this completely before we move on to the next thing.

How far off is the fuel-injected Carberry?
It will happen when we take it down to Bengaluru for the required changes, which will be within a month.

What do you think of Royal Enfield’s new parallel-twin motor?
I think it’s nice; they have done a good job. I looked at the bike when they displayed it in black and chrome, which is the same as our prototype. It looked like a younger brother to the Double Barrel 1000; it looked like part of the same family, but different. Theirs is a smaller, more sporty production bike while ours is a higher-priced, hand-built cruiser, and more unique, of course, because it’s hand-built.

If available, would you fuse two cast-iron engine blocks instead of unit construction engines (UCE) for your motorcycles like you did with the prototype?
At some stage I would have thought that, but I have fallen in love with the UCE top-ends and I’d prefer not to go back actually. They look as cool as cast-iron units, and are more functional, have less oil leaks, run cooler, and are more efficient; everything is just improved.

Who is the target customer in India? Especially when Royal Enfield now has a parallel-twin that will be significantly more affordable?
The higher-end market of course; there are bikes out there that are selling for two-three times more, probably with bigger horsepower and less suited. They sell because people sometimes just want something bigger or better. Basically, we’re targeting buyers that are looking for more grunt than the 500 and the patriotic person would probably choose one of ours over an imported one. Someone who likes classic lines than retro is also in sights, as ours is more true to classic than retro. It’s not a modern engine and has no balancer shaft or overhead cams –  it is a true long-stroke, classic engine. It has more low-down torque, is grunty and the engine is not too high-tech. Enthusiasts are going to love this because it’s very reminiscent of 1950s, ‘60s even ‘70s style motorcycle, with a touch of technology to make it practical.

Are there a number of bikes sold per year that you would like to see?
Half-a-million (breaks into a laugh). People ask how many we’re going to produce per year, but it’s all going to be very different from year to year. It’s very hard to tell with a project like this due to re-investments, which are based on demand, of course. I don’t think we’re going to have trouble with the demand as it will be there, it’s more a matter of how many we can build. So, we’re probably looking at, possibly, around 200-300 annual units by the second year.

Does Carberry expect to sell more bikes overseas? If so, what will be the expected India vs abroad ratio?
Once again, the market will dictate that. The world’s a big place, but there are a lot more Enfields in India than there are in the rest of the world. It is hard to tell which one will take over. I think India will dominate in the sales, but the market is opening overseas for motorcycles and, especially, for custom engine builds.

What’s the plan for aftersales support, both for India and abroad?
For India, we’ll have direct support where we can have mechanics sent out in situations. But largely, a Royal Enfield mechanic can fix these things. They know them and they understand them – it’s only the bottom-end which is going to be a little bit different. We can train mechanics in different cities or send somebody out there to finish the job or it can be sent back to us. We can follow a similar strategy for overseas as well, but sending the bottom-end back is not as practical. As we expand we’ll have more people trained for parts that are unique to a Carberry motorcycle.

How is Carberry preparing for BS-VI norms and what about ABS?
We’re dealing with BS-IV at the moment and like all the companies out there. Basically, it is about crossing the bridge when you come to it, and that’s how I have gotten to this stage. If you are looking at the bridges ahead of you, you are just not going to take the first step. We will get there one way or the other; if the other companies can do it, we can do it.

As for ABS, it will be fitted from our first bike.

Do you see Royal Enfield as competition?
No, their new 650 will definitely take a few sales, but it also creates a stepping stone to our bike. Because, the guys who move from the 500 to the 650 will eventually ask what next and rather than taking an imported bike, they would rather get something that has similarities. And I might add that we are not a competition to Royal Enfield because we can’t sell a bike without them selling us the parts. So, it’s a win-win situation for them and they have been very supportive of our company, even though we are not connected as one.

Will a Carberry owner get a spare part at a Royal Enfield workshop?
The parts that are Enfield parts are just going to bolt on, that’s obvious. I am sure the Royal Enfield shops in the country aren’t going to have a problem with it. If one of them needs a top-end rebuild and some new carburettors, they are going to sell the parts and do the work; I don’t see the problem with that, it’s clean sailing.

Will you be selling the Carberry engine as a standalone? If yes, for how much?
Yes, we will sell crate engines for custom bike builds. They are going to be released much quicker in the market worldwide. The engine will be priced at Rs 4.96 lakh, plus taxes if applicable. This includes the complete engine in running condition, complete with transmission, ignition, carburetion, everything.

Has any custom bike builder already used your engine?
Goa-based Rag & Bones have built a beautiful motorcycle around our engine; I am very proud of that. In the past, I made 14 motorcycle engines which went to custom builders; one went to a person in New Zealand who put it in a 1976 Triumph frame. He is now ordering another engine that he wants to put into a Ducati Monster frame for his son. The engine could be fitted into the café racer and bobber style of motorcycle, it’s just so versatile in that manner.