The plant inaugurated today is the two-wheeler manufacturer's fourth facility in India. 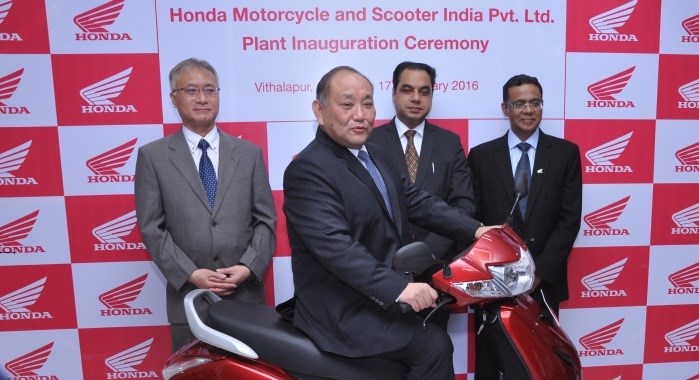 Elaborating on the Asia-Oceania region which contributes 56 percent to Honda’s global sales (two-wheelers, automotive and power products) and how India leads the growth momentum, Noriaki Abe said: “For two-wheelers, ASEAN countries contribute 13.8 million sales which is 80 percent of Honda’s global unit sales with production facilities in nine countries. India is the fastest growing economy in the world and one of the most important and fast-growing markets for Honda. With this vision of growth, today we have achieved a new milestone for our business in India. Our fourth factory in Gujarat will make India attain No. 1 position in all ASEAN countries. We would expect this growth momentum to continue, as well as expect the Indian operation to be the export hub for ASEAN countries. This plant would be a benchmark plant in India, not only in terms of volume but also safety, quality, morale and human aspect.”

Adding to this, Shinji Aoyama said: “India plays a key role for Honda’s two-wheeler business. In 2015, Honda’s global sales of all products was 28 million units, out of which global two-wheeler sales stood at 17 million units. Today, 25 percent of the total Honda two-wheelers sold across the world come from India. We will continue to invest in technology for the Indian market. Through training and cross-market collaborations, we want to make India Honda’s technology hub as well. Driven by the visionary growth-centric outlook of the government, there is an increased focus on investing in roads and infrastructure. These factors imply that the best days for the scooter market in India, are yet to come.”

Talking about the increasing demand for automatic scooters in the Indian market and how bringing a scooter-only plant in India makes business sense for Honda, Keita Muramatsu said: “Increasing scooterisation, a trend seen earlier in developed markets of the world, is the key driver for the Indian two-wheeler industry today. Honda 2Wheelers is the undisputed market leader in this segment in India with a market share of 56 percent and growing. Gujarat is an extremely productive market for Honda and we have a market share of 62 percent of the scooter segment here.”

The two-wheeler maker's other plants are located in Manesar, Tapukara and Narsapura.