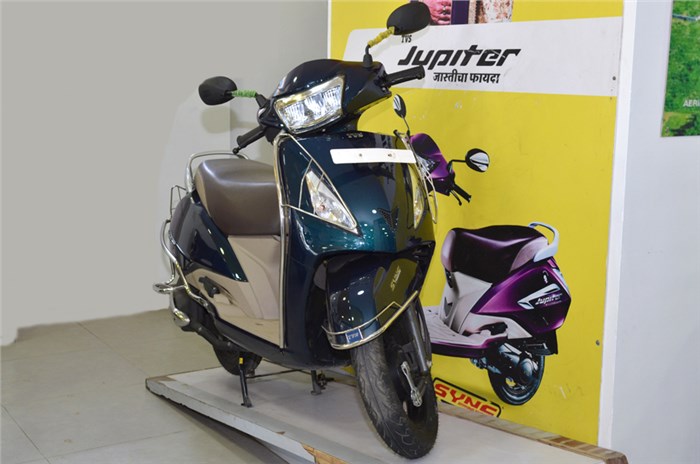 Even though sales of the scooter segment were down 9.83 percent in October 2019, to 5,80,120 units, what would prove heartening to manufacturers is that month-on-month (MoM) sales are better than September's 5,55,829 units, which were a year-on-year decline of 16.60 percent. Likewise, the movers and shakers of the scooter world also posted better MoM numbers, with popular steeds like the Honda Activa, TVS Jupiter and Suzuki Access 125 refusing to buckle under the slowdown. Of course, it helped that October 2019 was a festive months what with Dhanteras, Navratri and Diwali all bundled inside 30 days.

The Honda Activa is to the scooter market what Maruti is to the passenger vehicle market. If the Activa sneezes, the scooter market catches a cold. Which is what has happened over the past 11-odd months. While the Activa remains the unassailable scooter market leader, its sales have slowed over the past year. In October, the popular gearless scooter went home to 2,81,273 buyers, up 13 percent over September's 2,48,939 units and far better than August's 2,34,279, July's 2,43,605 or June's 2,36,739. Clearly, Activa numbers are going up. A clutch of new products is helping.

The Jupiter, India's second bestselling scooter, like the No. 1 Activa, has posted a strong performance in October. At 74,560 units, the Jupiter recorded 8 percent MoM growth over September's 69,049 units.

In an effort to rev up sales, the Chennai-based manufacturer has been busy launching a flurry of variants of top-selling models, and it looks like the move is working. In September, it launched the new Jupiter Grande, priced at Rs 62,346 (ex-showroom, Delhi). The Bluetooth console-equipped Grande becomes the most expensive one in the range, Rs 2,446 more expensive than the Jupiter Grande Disc SBT, at Rs 59,900, and Rs 8,855 more than the standard Jupiter. This variant also gets features like call and text notifications, an over-speeding alert, among other regular data, like the trip and odometer.

The Suzuki Access 125cc scooter has turned out to be a game-changer for the company. This popular buy and Suzuki's best-selling scooter is a consistent No. 3, after the Activa and Jupiter.

On July 16, Suzuki launched a refreshed version, the Access 125 Special Edition (SE) equipped with a disc brake variant. It is powered by the same 124cc, four-stroke, single-cylinder all-aluminium engine that develops 8.7hp at 7,000rpm and 10.2Nm of torque at 5,000rpm.

At No. 4 is the Honda Dio, which saw despatches of 36,939 units last month, a tad less than the 38,752 units in September. The Dio has strong brand equity among young college-going buyers, with Jharkhand, Karnataka and Maharashtra being strong markets.

The TVS Ntorq is turning out to be a standout performer for the company. Compared to a year ago, the 125cc scooter has jumped one rank to be at No. 5 spot, with 23,842 units, albeit less than the 27,814 units it sold in September. The snazzy-looking scooter has a lot going for it, including its youthful appeal. The scooter is riding the growing wave of demand for 125cc scooters, so expect better numbers to come its way later in the year.

On September 15, TVS launched the Ntorq 125 Race Edition at Rs 62,995 (ex-showroom, Delhi). The new model features a new LED headlight with a T-shaped diffused LED DRL, as well as a few other changes. Aside from the new LED headlight, the Race Edition of the 125cc scooter features a unique colour scheme. The body panels are red-, black- and silver-coloured and the scooter also gets chequered-style decals on the front apron and side panels. Interestingly, what would be regular black plastic on the standard scooter is painted in red near the footboard of the Race Edition. It also features a hazard light, this time around.

With the addition of the new colour scheme, the Ntorq is now available in a total of eight colour options, three of which are metallic and five have a matte finish. The scooter is powered by a 124.8cc, single-cylinder engine that makes 9.4hp at 7,500rpm and 10.5Nm of torque at 5,500rpm.

In seventh place is the Yamaha Fascino with 12,272 units, down on the 13,124 units of September and considerably less than the 15,479 units in May and 14,873 units in April. Yamaha needs to do more if the current sales momentum is to be maintained, especially when you consider that it now has a direct rival from Hero in form of the new 110cc Pleasure Plus.

Coming up eighth is the Hero Maestro with 11,807 units, down on September's 14,191 units and sharply less than the 33,053 units it sold a year ago and gave it fifth place. In May 2019, Hero launched the Maestro Edge 125 in three variants – a carburettor drum brake variant priced at Rs 58,500, a carburettor disc brake variant at Rs 60,000, and a fuel-injected variant at Rs 62,700. These prices are on par with rival products like the TVS Ntorq and the Honda Grazia.

The Yamaha Ray, which was in ninth position in September, gets 10th place in October with 8,575 units. This scooter recently got updated with a combined braking system and got a new blacked-out colour scheme.

Gearless scooters have, over the past decade, brought new life to the mobility scenario in the country and have, among other things, enabled women to commute on their own. For a good amount of time, the scooter segment's growth rate had kept pace with the SUV segment. With the SUV sector bucking the downturn with a robust 22 percent YoY growth in October, will scooters follow? Much depends on return of good times in rural India.