To be made at Hero’s Gurgaon plant, the manufacturer is looking at small volumes of the Leap to begin with. 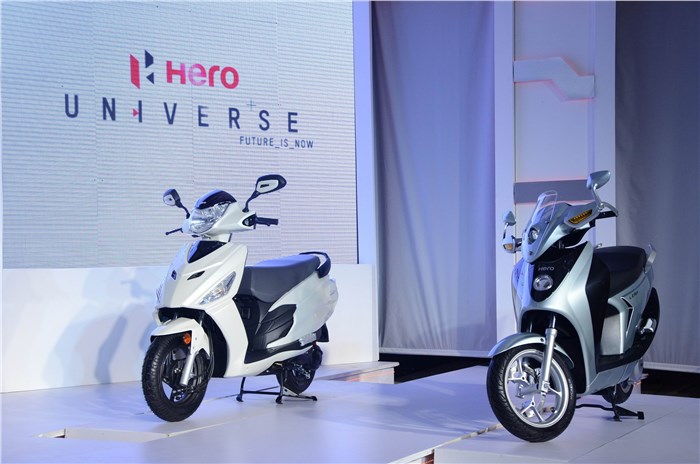 Hero MotoCorp, as part of its plunge into the hybrid two-wheeler segment, is to roll out its electric serial hybrid scooter Leap in February 2015. To be made at Hero’s Gurgaon plant, the manufacturer is looking at small volumes of the Leap to begin with, say sources in the know to our sister-magazine, Autocar Professional. An annual production figure of 6,000 units is what is estimated and, depending on demand, this could see a spike.

The Leap, a prototype of which was first shown at Auto Expo 2012, was in a pre-production ready stage in January this year when Pawan Munjal, MD and CEO, announced, “The Leap will be first launched in the global markets, mainly the western geographies and then brought to India.” The aim was to first check out the response in overseas markets before testing the Indian market. Hero MotoCorp, which is already exporting its existing crop of two-wheelers to some markets in Africa and Latin America, will tap developed markets like Europe and USA for the Leap. In addition, a new ‘low-cost 100-cc motorcycle’ (codenamed CP1) will be launched in mid-July in volumes of 300,000 annually. It will be a derivative of the Hero HF Dawn.

This will be followed by its scooter range that was showcased earlier this year – the 110cc Dash in August 2014 and 125cc Dare around November this year. While the Dash scooter will be pitched at male buyers and is expected to see volumes of 400,000 units per annum, the  Dare could be produced in annual numbers of 50,000 units with both models to be made at Gurgaon.

Meanwhile, the company’s fourth plant at Neemrana in Rajasthan which was under construction will go on stream by end-June 2014 likely with its existing product range. Hero’s time-tested commuter bikes – Passion Pro and Splendor –are expected to start production here, say sources. A year later, the company’s Halol plant in Gujarat, its fifth in India, will commence production with a capacity of 1.8 million units. With this, Hero’s installed capacity would rise to an annual 9 million units by end-2016. Recent media reports say that Hero MotoCorp is planning a sixth plant in South India with a proposed production capacity of 1.5-2 million units that will augment Hero’s overall annual capacity to 12 million units.

The company’s long-term target is to achieve 100 million units from 20 manufacturing facilities globally and a footprint in 50 countries by 2020 with an annual turnover of Rs 60,000 crore. Hero is believed to be mulling the launch of 40 new models between 2014-16 in line with its broader 2020 vision. It also plans to enter the US and American markets by 2016 with assembly operations in South American economies like Argentina and Columbia.