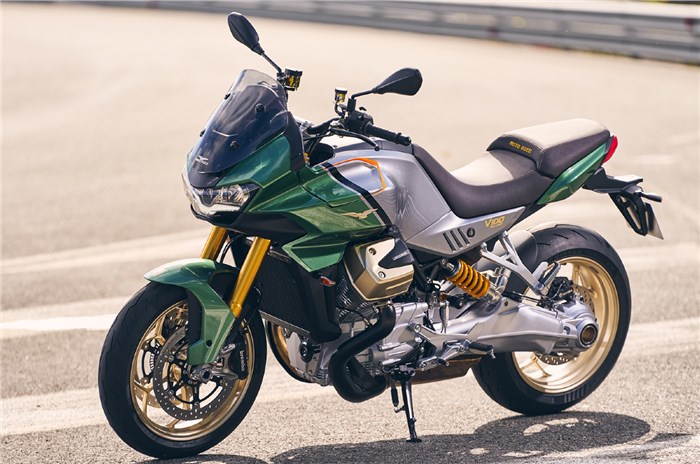 Moto Guzzi V100 sends its power to the rear wheel via a shaft drive.

After teasing us with images of the V100 Mandello motorcycle in September, Moto Guzzi has now revealed its specifications and more information at EICMA.

Moto Guzzi is set to be the first production bike in the world to feature active aerodynamics. This system works by adjusting deflectors on either side of the fuel tank. The Italian motorcycle brand claims that the deflectors can reduce air pressure on the rider by up to 22 percent. The V100 Mandello also has an electronically adjustable windscreen.

Powering the bike is a 1042cc, DOHC, v-twin engine that makes 115hp and 105Nm of torque. This engine is also liquid-cooled, which is a first for the Italian company. Moto Guzzi says the engine is 103mm shorter than the V85 TT’s engine. The new engine uses six-speed with a wet clutch. The V100 sends its power to the rear wheel via a shaft drive.

Chassis-wise, the new V100 uses a steel-tube frame with the engine as a stressed member. Suspension consists of electronically managed Öhlins Smart EC 2.0 components. Moto Guzzi has also stepped up its game when it comes to electronics, as this bike gets cornering ABS, cruise control, cornering lights and four ride modes – Travel, Sport, Rain and Road. Each of these manages three different engine mappings, four levels of traction control and three levels of engine braking.

The V100 Mandello will be available in two variants. The higher-spec variant will come fitted with the aforementioned Öhlins semi-active suspension, along with a quick shifter, heated grips and the Moto Guzzi MIA multimedia platform as standard. This system lets the rider connect their smartphone to the screen and access features like music, navigation and more via handlebar-mounted controls.