Doug Danger accomplished what Evel Knievel attempted way back in ’72 — jumping over 22 cars. 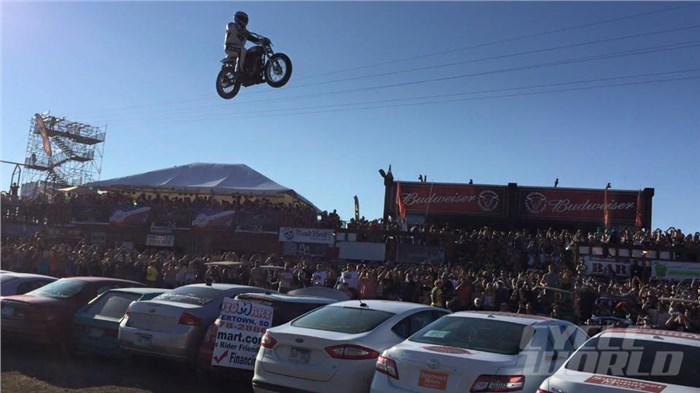 Evel Knievel, who was inspired by the Joie Chitwood Thrill Show, was one of the greatest motorcycle showmen of all time. He rose to fame in the ’60s and ’70s. In 1972, he attempted to jump 22 cars parked side by side, on his Harley-Davidson XR750 that was built in the same year.  Now 43 years later, Doug Danger has succeeded in breaking this record, astride a replica of the bike used by Evel Knievel.

In 1972, Evel Knievel had asked for an additional safely ramp over the last three cars, which he bounce landed on, thus failing at the stunt. When Doug Danger attempted the jump, the back wheel of his Harley barely cleared the edge of the ramp, and he narrowly missed the edge of the deck, to the amazement of the audience.

“This is the best day of my life,” said the daredevil and motivational speaker. “That bike landed like a ton of bricks, and I wasn’t sure I was going to be able to keep it from bouncing down the ramp, but I did it! I broke Evel’s record and cleared those 22 cars!”

This is not the first time that Doug Danger has performed a heart-stopping feat. He has held the Guinness Book of World Records title for longest motorcycle jump, and has cleared a leap over the fuselage of a 737 jet. Besides these achievements, Doug Danger is also a two-time award-winning Toastmasters motivational speaker.