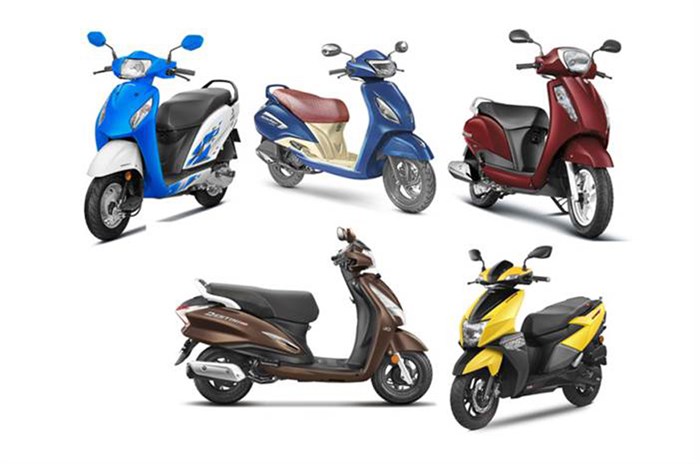 In what was quite an upset in January 2019, the Suzuki Access 125 had taken second spot, relegating the longstanding No 2 player, the TVS Jupiter, to third. But the TVS Jupiter has fought back in February, with despatches of 48,688 units, ahead of the Suzuki scooter. The 110cc Jupiter continues to be a strong contributor to TVS Motor’s monthly sales performance.

Continuing demand for the Suzuki Access 125 means that the scooter jotted up numbers of 48,265 units in February 2019. The Japanese company’s turnaround efforts are finally visible as it continues to work not only on its product portfolio but also on the dealer development side. The consistent and linear growth in the demand for Suzuki Access 125 is to be attributed for this achievement along with the company’s expanding reach across the country. This is a first for Suzuki as well as the Access 125 scooter, in at least the last eight years or more.

The closest contender to the Jupiter and Access appears to be the Honda Dio. However, the Suzuki Access continues to outsell Honda Dio due to its family scooter appeal. The Honda Dio stays strong among young college going buyers, with Jharkhand, Karnataka and Maharashtra being strong markets.

The Dio, which is the No. 4 bestselling scooter in India, saw despatches of 45,017 units in February 2019. These numbers only suggest that the Honda Dio continues to enjoy strong brand equity amongst young and the new-age commuters across cities.

At No. 5 is the Hero Destini 125 whose volumes continue to surge. The scooter’s aggressive pricing (sub-Rs 55,000, ex-showroom) appears to be working for Hero MotoCorp, which intends to desperately make a mark in the scooter segment, in this case the fast-growing 125cc category. While it is natural for the largest two-wheeler manufacturer to receive a good response for its newly launched 125cc scooter, thanks to its widespread distribution network across the country, the real report card will be defined by the market response of at least three quarters.

Hero MotoCorp’s 102cc Pleasure scooter, which targets urban female commuters, secured wholesale volumes of 15,264 units in February 2019, more than the 12,892 units in January 2019 but less than the 16,893 units it notched a year ago. It stands at the seventh spot in the Top 10 bestselling scooters list.

Hero MotoCorp’s one-time strong scooter brand Maestro, which used to fetch volumes of about 40,000 units per month and gave tough competition to the TVS Jupiter and Suzuki Access in the past, is now ranked tenth with 10,223 units. It would be interesting to gauge how Hero MotoCorp, which has been under tremendous pressure to perform in the growing domestic scooter market, realigns its position when it rolls out the new Maestro Edge 125 in the coming months. Stay tuned for more updates in this exciting vehicle segment.