With excellent all-round capabilities, the Suzuki Access 125 sits comfortably atop the 125cc family scooter segment. Can the new TVS Jupiter 125 usurp the throne with some out-of-the-box thinking? 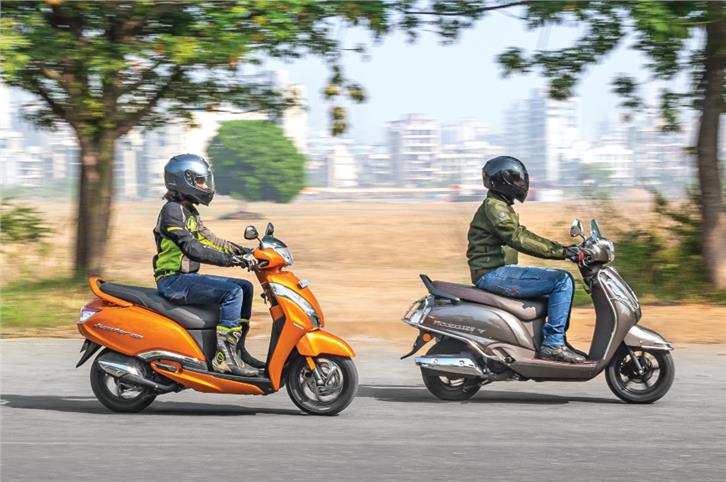 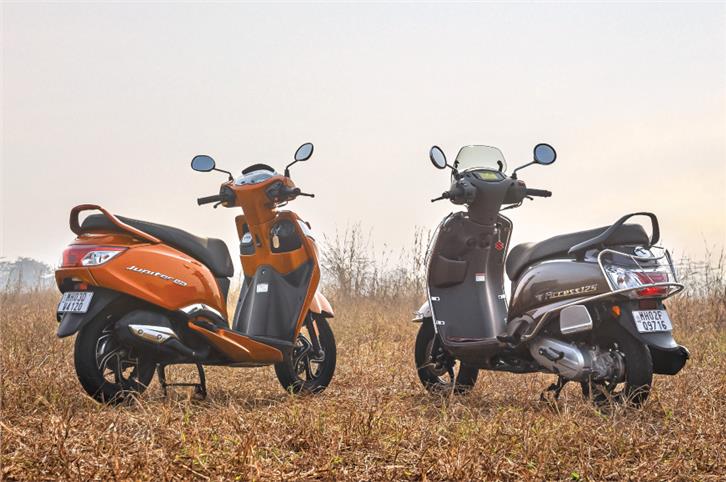 125cc scooters are no longer the niche sub-segment they once used to be. The class leader, the Suzuki Access 125, is now one of the bestselling scooters in the country, routinely shifting over 40,000 units a month. This is a space where TVS has also fielded an offering, but the sporty NTorq, as fun and feature-rich as it may be, isn’t necessarily everyone’s cup of tea. So the good folks at Hosur have created the Jupiter 125 – a new 125cc family scooter designed to give the Access an apples-to-apples run for its money. It certainly impressed us during our first short spin at TVS’ test track. But can it hold its own when ridden back-to-back against the king of the class? Let’s find out.

One of the many draws of the Access is just how good an all-rounder it is. And that do-it-all quality is most evident in the engine. Sure, it’s labelled a sensible family scooter, but its 125cc engine can give some of the ‘sporty’ 125cc scooters a run for their money. It feels grunty and powerful, and yet, at the same time, it’s super smooth and refined, with barely any vibrations coming through to the rider. The cherry on top is its excellent fuel efficiency, and all in all, the Access’ motor ticks most of the boxes that Indians want their family scooters to tick.

On paper, the Jupiter seems like it has an engine to match the Access. Yes, it’s slightly down on power, but it makes more torque, and it does so at lower RPM than the Access. But then again, it’s also carrying around a little more weight. In the real world, the Jupiter does a pretty good job of keeping up with the Access at city speeds. It’s just as responsive when seizing gaps in traffic, thanks to its CVT tuning being biased towards acceleration. But on the flipside, you do feel a bit more vibrations through the floorboard, and it doesn’t quite have the top-end of the Suzuki. Post 60kph, the Jupiter’s acceleration begins to trail off, while the Access keeps pulling quite well; and eventually, the Jupiter tops out at an indicated 90kph (VBox 80kph) where the Suzuki still has a little more in the bag. 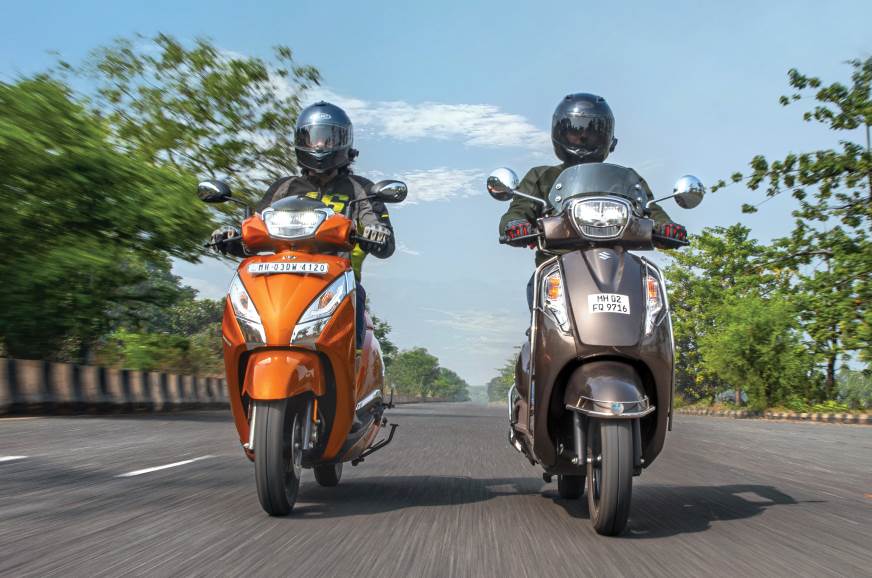 It’s a similar story on the fuel efficiency front – both scooters are quite evenly matched in the city, returning respectable figures in the 50-55kpl region. But on the highway, the TVS’ CVT tuning means it can’t quite match the Access for mileage.

Where it does claw back some ground is in the chassis department. With a preload-adjustable gas-charged rear shock and a 12-inch rear wheel, compared to the Access’ 10-incher, the Jupiter has the upper hand on paper. And this is borne out in the real world, too. It rides rather well on our roads, doing a fine job of flattening out the smaller bumps. Even over the bigger and rougher undulations that can’t be flattened, it never thuds or crashes through them, but rather rounds them off quite nicely, leaving you feeling well isolated from the road beneath. The Access rides well enough in its own right, but can’t quite match the Jupiter’s levels of absorption and plushness, and ends up feeling a little more unforgiving, especially at the rear.

Both have scooter-typical handling, with light steering and a slight top-heaviness. But while the Access feels unnervingly vague when leaned over, the Jupiter is a lot more communicative and sure-footed through corners. Its brakes feel nicer and work better, too.

These being scooters, there is a hefty importance given to space and practicality. And the Access’ excellence in this area is one of the many reasons why it has been the scooter of choice in this segment. With a roomy floorboard, and loads of space on the seat as well as underneath it, its practicality quotient is quite high. Its handlebar is also significantly higher than the Jupiter’s and doesn’t foul with the knees of taller riders. But the Jupiter has upped the ante considerably, with even more room on the floorboard, and an even longer seat. Its most significant advantage, though, is in the underseat storage compartment. With the fuel tank having been moved to the floorboard, a generous amount of space has been freed up under the rear portion of the seat, resulting in a rather gargantuan 33-litre storage space. That’s over 10 litres larger than the Suzuki’s! 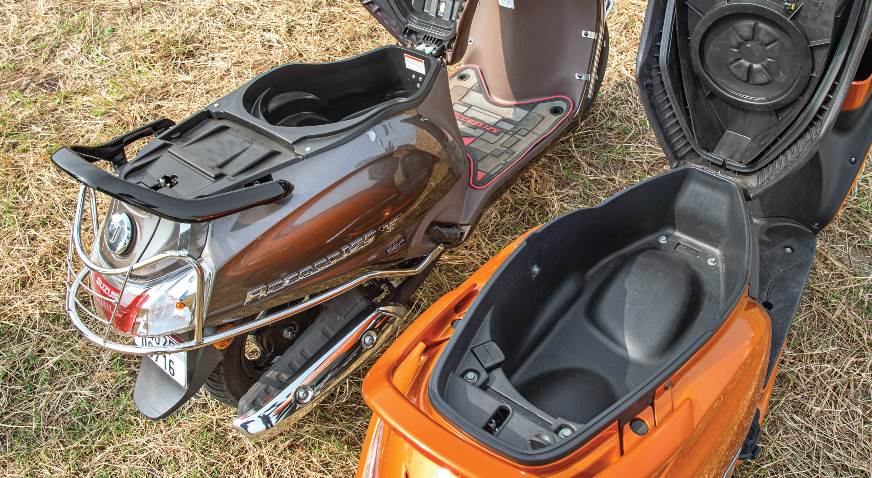 TVS’ smart thinking has had positive knock-on effects, too. With the fuel-filler now on the back of the apron, there’s no need to get off the scooter when filling up. The Access’ fuel-filler isn’t quite so convenient – even though the BS6 scooter received an external filler cap on the back of the scooter, it required you to physically insert the key into the cap to open it, meaning that you do have to get off the scooter. However, it’s worth noting that if you are the sort of person who likes to brim their tank, the Jupiter’s long filler neck means that fuel bubbles up quite easily, and topping up the tank requires some patience.

It’s quite an even match in the features department. The Jupiter’s trump cards are a silent starter and an auto stop-start system, while the Access fights back with fully digital instrumentation and Bluetooth connectivity on its top variants. The Jupiter has to make do with a semi-digital design, but its instruments are quite information-laden. On most other counts, they’re quite equal, both getting an LED headlight, a USB charger and a boot light. 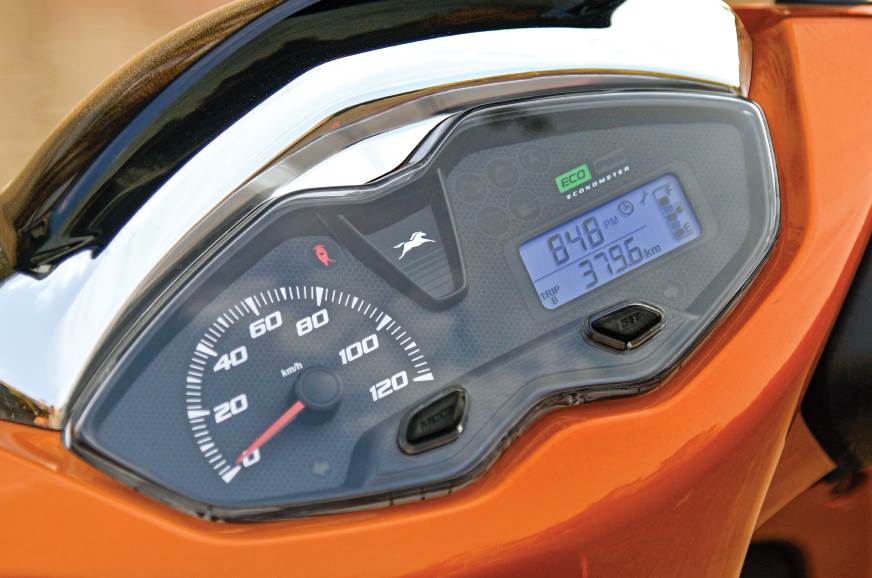 Both manufacturers have played it safe in terms of design, with fairly conventional and straightforward appearances that are unlikely to polarise audiences. The Access has a slightly taller, more commanding and more square-ish stance, while the Jupiter sports a more rounded and friendly look. What stands out on the TVS is the sheer amount of chrome finish all across the scooter, right from the mirrors to the apron to the side panel and even a thick strip above the instrument cluster. It also has slightly better quality and finish levels at the important touch points, which, combined with the chrome, lend it a greater air of premiumness than the Access. 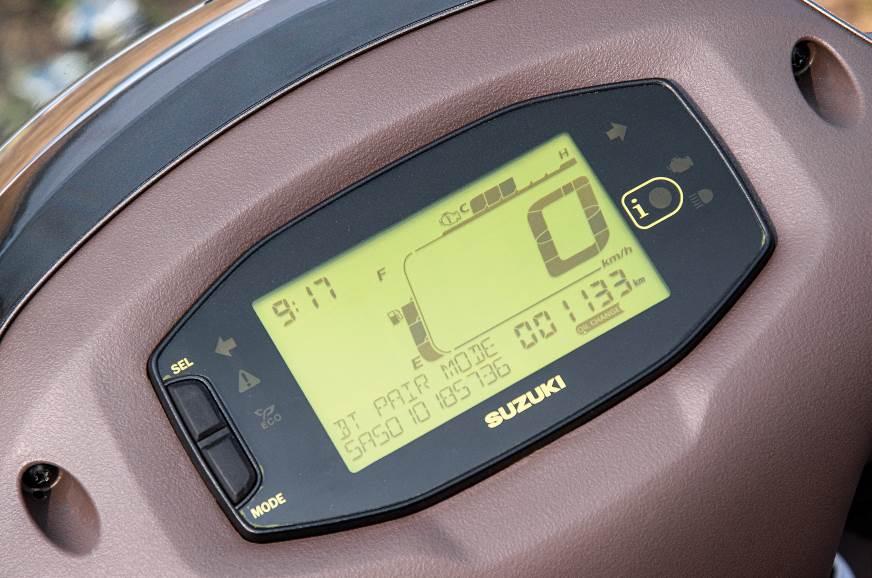 Despite this, the scooters are quite even in terms of price. The Jupiter’s base variant (Rs 74,425) starts slightly below the Access’ (Rs 75,600), but its top-spec disc brake variant (Rs 81,300) is almost exactly on par with the most expensive, non-Bluetooth equipped version of the Access (Rs 81,000). The connected versions of the Suzuki command a premium over the Jupiter, costing between Rs 82,800 and Rs 84,800 (all prices, ex-showroom, Delhi).

It’s quite apparent even today just why the Access has been such a success story in the Indian market. It continues to offer a near-perfect cocktail of performance, practicality and efficiency that Indians keep lining up for. It has one of the smoothest, most punchy engines in the business, and is a better pick for taller riders. But it seems to have met its match in the TVS Jupiter 125. The newcomer is just as quick as the Access in the city, just as fuel-efficient as the Access in the city, it rides better, and has the higher practicality quotient. So if you are a tall rider, or are spending a majority of your time at relatively higher speeds, the Access may still be the pick for you. If not, then the Jupiter’s strengths should be enough to sway you to team TVS. 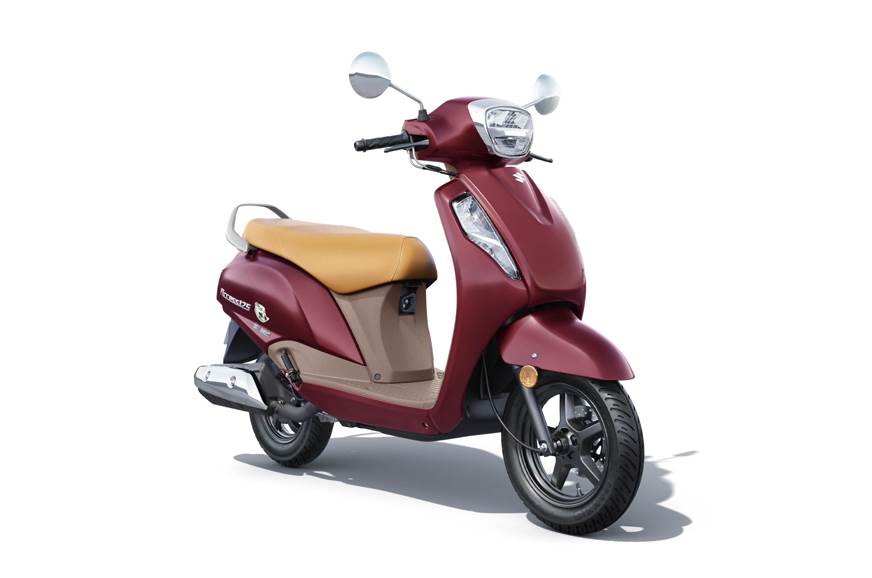